It had been my intent to spend this entry talking about the wonderful lunch I had with Lori, from Swap Bot, this afternoon.

But then I heard the shocking (but not surprising) news of the death of Robin Williams, apparently by his own hand.

How my heart aches for the pain he must have been in to choose this permanent solution for what should have been a temporary problem.
What a monumental talent.  Maybe it was inevitable that someone with that degree of talent, that amount of energy would be a such a blazing star that burn out was inevitable.

Whatever the reasons, we have lost a major star, a major talent, a major humanitarian.

I've also lost the answer I usually give when asked if I were to invite any three people to dinner, who would I pick.  I invariably say "Robin Williams."

My heart goes out to those who knew him and loved him in real life, and especially to his wife and children.  I can't begin to imagine their pain.

There is no easy segue to the mundane, so I won't even try.  I have said here often that I am a member of SwapBot, that site where you exchange things with people.  Letters.  PostCards, small gifts, books, craft projects, etc.   Not being crafty, I usually exchange post cards, journals and the occasional thing that amounts to a collage that Brianna could do.  I also participate in a discussion group for one of the special interest groups.  This one is the "Over 50 and Proud" group and I've been a member for about 3 years.  It's not quite as active as CompuServe used to be, or as Facebook is now, but everybody there is over the age of 50, so more in my age range (even given that our firstborn will turn 50 next year!)

They are a diverse group of women, from flaming liberals to far right bornagain Christians; from gay to straight; from neatniks to...well...people like me....TV addicts to "I sometimes watch a little PBS."  Not a lot of women active in the discussion, but over the years, more and more of us have stuck around to share bits of our day with everybody else.  More of those "imaginary friends" that Bob Mitchell's wife on CompuServe used to complain about.

Today, Lori moved from the range of "imaginary friend" to "face to face friend."  She's a woman with whom my path has crossed occasionally.  She doesn't live in Sacramento, but her family is here and she was going to be in town visiting, so she asked if I would like to get together for lunch.

I've been on the internet for a long time now.  I just found the very first message I wrote on CompuServe, when I was trying to figure this whole "internet" thing about and they were written in January of 1993.

Over the course of those 20+ years, I have met many "imaginary friends" and found them to be "face to face friends," so I'm never nervous about meeting one of the "invisible ones" in person,  Occasionally it's a "well, that was interesting, but I probably won't see this person again."   But by and large, most of my face to face meetings have gone quite well.

Today was no exception.  Lori arrived at Ernesto's Mexican restaurant, and we started talking and didn't stop for 2-1/2 hours (I was very lucky, because I was parked in a 1 hour zone, but did not get a ticket).  Somewhere in there I hate a delicious enchilada suisse, which appears to be a house specialty.

We discussed everything from the other members of our SwapBot group to vampirs (not really much of a crossover there).  We discussed politics and pets and our personal lives.  I truly felt like I'd known her for a very long time by the time we left and had her sister, who picked us up, take a picture for us.

It was a perfect "getting to know you" lunch and I hope we get to do it again.  And of course, our lunch was today's #42 of 100 Happy things! 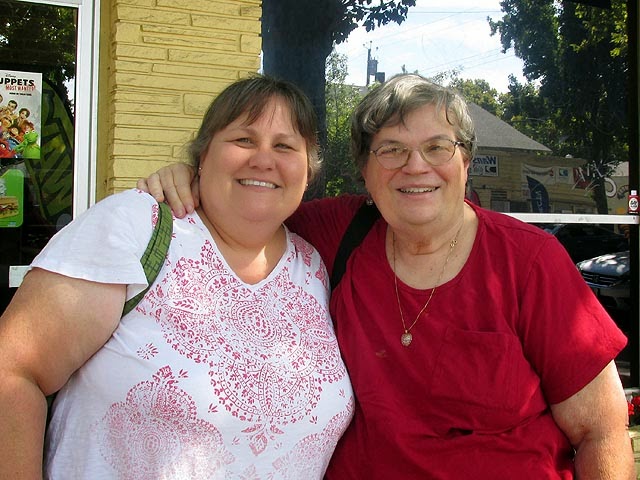