Playing with the Little Kids...and the Big Kids

I don't remember the last time I was at a Grammar School Carnival, but probably not since David left grammar school, which was a very. long. time. ago. But there we were at the school carnival for Brianna's school...and what fun it was!

Uncle Ned just wanted to see the wall where you throw fishing lines over and fish for prizes.

Once Brianna got over being hesitant, she entered all the carnival games with gusto.

She tossed the beanbag (circled) through holes twice, was fierce in knocking two golf balls off tees with a water bottle, played golf more like croquet but had fun, and had a good arm, getting the football through hula hoops twice.  She earned tokens and bought herself a whoopie cushion, which got filled too full of air and exploded when Ned sat on it.  She got "bee" glasses instead. 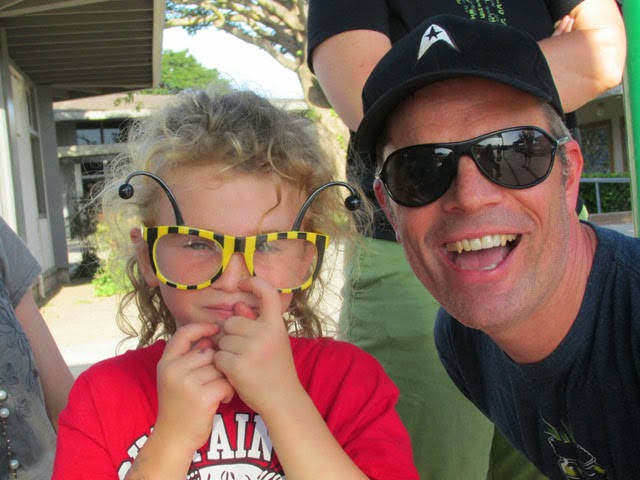 It was so sunny on the playground that I was wishing I could wear hats...and then remembered I had a hat I could wear...and it was even in the car.

After we left the school, we went out to the Sandpiper Golf Course, which overlooks the ocean, to watch the golfers (Norm, Joe, Ernie, Gerald) at the 18th hole.  The view is spectacular.

Almost makes a couch potato want to take up golf.  But not really.  The view, in fact, was so beautiful that those of us who were NOT golfing, and who just wanted to visit, didn't want to sit around tables, so lined up across the front of the club's bar area (sadly, bar was closed) to continue watching the view as we visited.

When the game was finished, we went to an Italian restaurant for dinner, all dozen of us (we were minus Ned and Marta, who stayed at Tom's to watch Frozen).

A busy but fun day...and tomorrow is the retirement party!
Posted by Bev Sykes at 11:30 PM

Email ThisBlogThis!Share to TwitterShare to FacebookShare to Pinterest
Labels: carnival