I'm always ready to leave bright and early when I know we have 400 miles to drive to get home.  Things may change now that Alice Nan is retired and isn't rushing off to the office at 6 a.m. any more.

Also, last night, Dick and Gerry suggested we get together this morning to have an actual visit (which we couldn't really do at the party last night).

So this morning we sat around and visited with Alice Nan, showed her the t-ball video, and just relaxed until she had to get ready for a meeting for a volunteer group.  We were tentatively meeting Dick and Gerry around noon and had an hour or two to kill first.

We decided to to "iMadonnari," described in the local paper thusly:

The 20,000 square feet of dark asphalt surrounding the Santa Barbara Mission will bloom into a rainbow of colors as hundreds of chalk artists join in the 28th annual I Madonnari Italian Street Painting Festival. Artists from Santa Barbara and beyond will turn the usually utilitarian surface into a patchwork of art works, created lovingly in chalk.

We went to this amazing exhibit in 2008, when Bri was just 3 months old and bundled up in a stroller.  I was amazed, then at the quality and diversity of the paintings and was anxious to see them again.

Street painting has a long tradition in Western Europe and the artists who draw with chalk on the sidewalk are called "madonnari," or "Madonna painters," because traditionally they reproduced icons of the Madonna.  There are some fifty such festivals worldwide now, but Santa Barbara was the first such street painting faire to come to the United States.  Artists apply to participate and are chosen by the committee.  Some 400 professional artists, and young people search for sponsors, get assigned a spot in front of historic Mission Santa Barbara and over the three days of Memorial Day weekend, they produce their artwork, many of them working from drawings divided into squares to be easily recreated on the ground in chalk.

Yesterday had been the day when all the awards were given out, speeches made, and the height of the festival, which ended yesterday, so today there were relatively few peopole looking, no food trucks or activities for the kiddies, and excellent opportunity for people who were just there to look at the pictures without fighting for elbow room with two dozen other people. 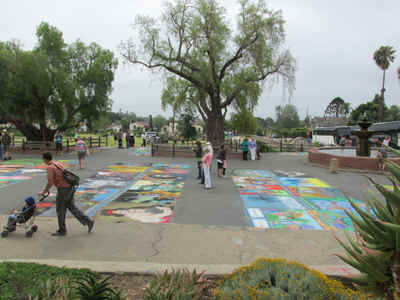 There were some excellent art works. 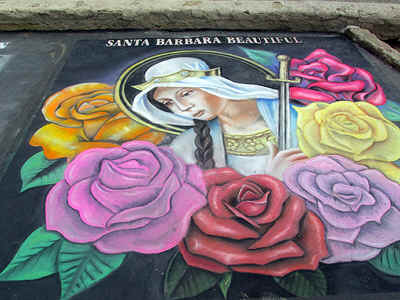 There were lots of animal pictures, which, of course, I loved. 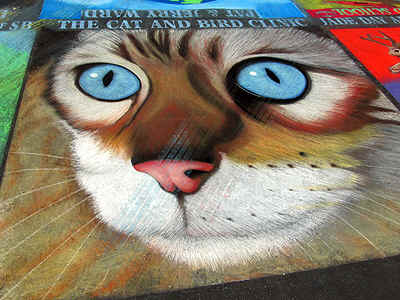 I particularly liked this Etch-a-sketch 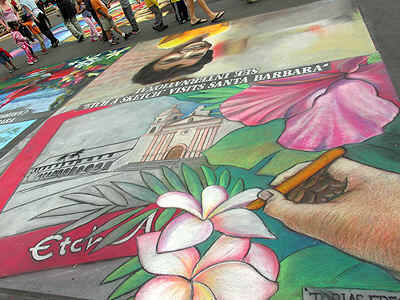 This was the product of one of the UC Santa Barbara dorms where Jeri lived for a year and it commemorates the tragic mass shooting last week. 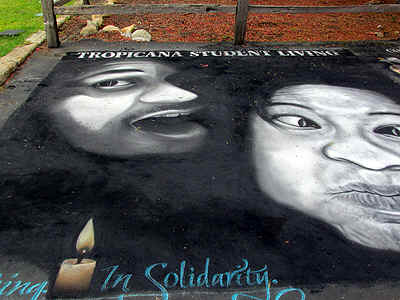 We just had a wonderful time roaming around and when we'd seen our fill, we went to a coffee shop while we waited to hear from Gerry about where and when to get together.  We ended up going to their house and sitting there for a couple of hours, nibbling on leftovers party food, re-hashing the party and reminiscing.  We left around 1:30-2 in high spirits and had a good ride home, listening to a David Baldacci book (which we almost finished, but there is still one hour to go) 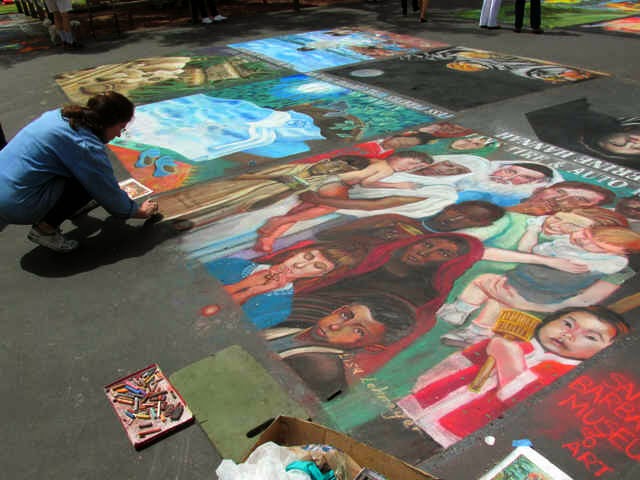