It's a day for anniversaries!  First, our friends Steve Schalchlin and Jim Brochu are celebrating their 30th anniversary (actually it's only the 29th, but that doesn't scan as well for a title...and it will be 30 in just a year).

(but you know how those gay relationships are...I'm sure this is just a passing whim for both of them.  But in case it lasts a bit longer, Happy Anniversary!))

Second, our friends Steve and Jan Isaacson are celebrating their 40th anniversary

They're theater types...founders of the 30 year old Davis Musical Theater Company...and you know how flighty those theater guys are.  I'm sure this is just a passing fad for them too.  But happy anniversary anyway, guys.

The final anniversary was the one that brought us to Santa Barbara this week end.  Our friends Dick and Gerry were celebrating their 50th anniversary.

We were in Dick and Gerry's wedding 50 years ago and were the only members of the original wedding party who were able to come to the party this week end.

It was just a wonderful party, with about 40 people there to help celebrate.  There was a a beautiful BBQ dinner catered by their friends, there were books of memories to share, and instead of a cake, a lovely arrangement of cupcakes topped by -- I think -- the original top to their wedding cake.

It was a loving event full of family and friends and memories and good food and drink.  I was honored to be there and happy that our friendship has survived these 50 years.

I dunno...these kids seem to have survived too.  I think they'll go the distance. 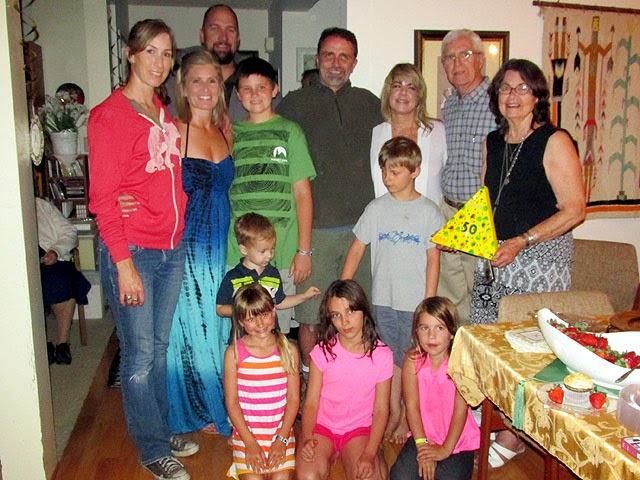 Email ThisBlogThis!Share to TwitterShare to FacebookShare to Pinterest
Labels: anniversary