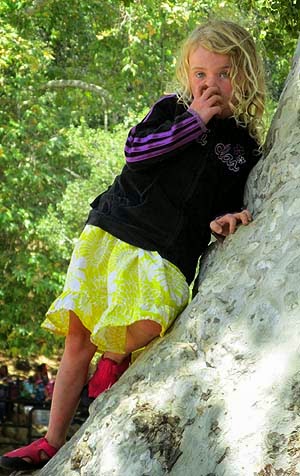 When I saw Brianna up in a tree at the park this afternoon, and looked around at all the people in the picnic area, I started thinking about our family tree and how it has changed over the years.


Alice Nan and Joe have been together for many years and when they married, Joe brought with him his version of a family tree every bit as rich (and complicated) as ours.

Joe was married before to a woman who had two children, whom he adopted.  They had one child together.  Joe himself is from a large family with lots of siblings, all of whom have children and those children now have children.  Sometimes it's difficult to remember who is who, since we don't see Joe's family all that often, though they are all lovely people with whom we have a good time whenever we see them.

Tom rented a room from Joe for over a year when he first moved to Santa Barbara and became like an older brother to Joe's daughter Jocelyn, who is now married to David, living in Boston, with two small children, Charlee (same age as Lacie) and James (6 mos). Alice Nan had scheduled her retirement to coincide with Jocelyn's annual trip home to visit family, so the weekend has included a lot of Joe's family as well.

Before we met up with some of Joe's family today, though, we first went out for breakfast at iHOP, across the street from the motel, with Walt's brother Norm and wife Olivia; Cousin Ernie Baur (he's famous, you know), and wife Lucille; Ernie's brother Gerald and wife Melissa.  And we were joined by Alice Nan's good friend Gingie, with whom she worked for many years.  She may not be a blood (or married) relation, but she has been around so long and participated in so many family activities that she certainly qualifies as "extended family."

Breakfast was great and I was glad they had seated us in the farthest corner of the restaurant, because this family has never been noted for its quiet voices.

After breakfast, we were saying goodbye to Gerald and Melissa, who were driving back home.  We stood by the hotel pool saying goodbye, and I finally left to go to our room.  I turned and looked back and decided that "Hour Baur" has become a verb. The group was "Hour Baur-ing," taking their sweet time saying goodbye.  Again.

The rest of us went to our respective rooms, waiting for word for Tom as to what we were going to do.  When the word came, we were to meet at a local park, where we would have a picnic.  We each picked up food for ourselves and headed to the park.

When Tom came he said the girls were really tired because they had already been running at the dog beach with Ned and Marta and then had gone swimming.  Lacie was exhausted and uncharacteristically quiet.

We sat around chatting and eating and were eventually joined by Alice Nan, Joe, two of Joe's daughters, his ex-wife, and assorted grandchildren.  Young Michelle became the self-appointed babysitter, carrying 6 month old James around, and helping to keep 2 yr old Charlee entertained, showing her how to take photos using Charlee's mom's (Jocelyn) camera.

Charlee even took some selfies.

In the meantime Charlee's grandma was teaching Charlee's brother James to say "la-la-la."

Tom and Bri went off for a hike in the hills

Bri also did some bonding with Ernie, whom she has decided is silly (she doesn't realize he is famous)

And while it was all going on, Walt did what he does best.

We decided that the girls were too tired (as were Tom and Laurel) for us to get together for dinner, so we decided to have dinner at Alice Nan and Joe's house.  In the meantime there was another Hour Baur to happen, saying goodbye to Ernie and Lucille, who were driving back Long Beach, so they could catch their flight back to Maryland in the morning.

Ned and Marta came to Alice Nan & Joe's with The Bouncer

Eventually we were all stretched out across the living room chatting and munching on See's candy, which Alice had received as a gift.

It's been a very big "family" weekend but such fun.  I love all these guys.  I love the Baurs, I love the Sykeses, I love Joe's family, especially Jocelyn and her kids (since I know them best of all the family).  I loved having the chance to wallow in "family" all weekend.  (Except for the Hour Baurs, of course.)

PHOTO OF THE DAY

Left to right: Lucille, Norm, me, Walt, Melissa, Olivia, Gerald and Ernie
taken at the lagoon at the Ramada in (of course there are so many of us
that you can't see the lagoon at all!)

Lots of great photos. And it sems like all of you had fun. Sometimes i wish had a larger family, but at the same time i'm happy with the family that i got now (only got one older sister). Think its less family issues with small families hehe, but maybe not.
notme78 from swap-bot