Wow.  It's October already.  Also, if he were still alive, it would be my father's 99th birthday.  Whew.  Good thing he died at 72.   He would have made a miserable old man!

I'm missing Walter White today. I'd rather be watching a maniacal drug czar cook methamphetamine and murder his way across the southwest than listen to what is going on in Washington.  I am so incredibly depressed by the inability of our elected representatives to represent us.  I am almost paralyzed by the depression of watching the government fall apart before our eyes.

While we are being held hostage by 1/3 of the members of one house of congress, We are dealing with our own tiny tyrant around here.  I was watching her race down the hall, tail wagging furiously, when Walt got home from running an errand the other day.

I was thin
king back to that terrified, skinny little girl we first took in.  How she hid behind furniture and trembled like she had palsy whenever anybody tried to touch her, especially men

Now she is a fat and sassy self confident little dog who runs the house and who has come to prefer being in Walt's lap at night to my own (until we go to sleep, and then she sleeps with me).  I looked at her in Walt's lap last night and as he scratched her back, she had this huge grin on her face.  Polly is not a "grinning" dog.

Polly's life depends on scheduling, and she is rigid in her sense of schedule.  When she decides it's mealtime, she takes no prisoners.  I usually feed the dogs while I'm making coffee, so breakfast is pretty set.  Dinner is at the end of Jeopardy (7 p.m.) and Polly continues to let me know she thinks they should eat 2 hours earlier, but, like the Republicans in Congress, I remain rigid on the mealtime.

Thus, Jeopardy has become a Pavlovian response.  Polly sits next to my chair, looking at me and sometimes whining softly during the show.   When the think music starts for Final Jeopardy, her ears perk up, and when the final theme music plays, she puts her paws on my chair and looks at me with a question on her face.  When I say "is it time for dinner?" she answers with one sharp bark (which I assume translates into "Yes!") that brings the other two dogs running.

Mealtime is one of Lizzie's favorite times of day too.  She comes in on springs and leaps, leaps, and leaps up and down waiting for me to fill her bowl.

(Showing her new haircut, courtesy of Ashley and her friend Megan)

The one command the dogs all know very well is "sit" and I've started telling her to sit when she leaps up on me, which is making my life easier.   I have had a lot of problem this past year with my left thigh.  It's where Polly sleeps on me and when something exciting happens, she digs her claws into my leg as she springs off of the chair.  Whenever I come in the front door -- or get ready to feed the dogs -- Lizzie leaps up over and over again clawing at my left thigh.  As a result, I've been having shooting pains in the spots where the dogs hit...and their continuing to hit them over and over again hasn't been helping.

When we were on our cruise, my thigh got a chance to recover for 2+ weeks and it was starting to feel better when we got home, so I've been doing what I can to keep the recovery going.  I try to always have something padded on my leg, usually a quilt, which keeps Polly's claws from my flesh.  And I'm discovering that the "sit" command is actually working with Lizzie.  I have to keep repeating it as her patience doesn't last that long, but so far in only a week, I'm kicking myself for not thinking of this before.

As for Queen Sheila, she is such a peaceful entity in this household.   Mostly she sits (or sleeps) outside, guarding the house--or on the couch in the living room protecting us from garbage men and mail carriers.  Sheila's problem is that damn spot on her left hip.  It comes and goes.  Either it's fine (which it was a week ago), or she gets an itch and starts biting at it, so that now, in only 3 days, she has a bald spot there the width of a quarter and the height of a dime.  Time to get out the oinment and the pills and start dosing her again.  This has been going on for several years now. 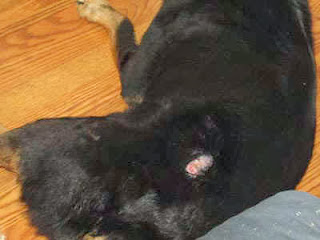 (As someone who frequently has an itchy back, I identify with this compulsion of hers!)

I do love these guys, and on days when it seems like the whole country is going haywire, it's nice that the only problems that affect me are Polly's orders, Lizzie's leaping, and Sheila's backside.
Posted by Bev Sykes at 7:56 AM