Let's Take a Walk Around the Block

One of my most recent swaps on SwapBot was to send a postcard to someone and on it list the things you see walking around the block.  I really didn't expect much, but it turned out to be kind of fun.

I started by taking a picture of Villanova Drive today so that I could make a postcard of it onto which to write all of my observations.  I was excited to make the postcard because I just spent nearly $30 on a box of postcards to print yourself.  Only using Avery's template everytime I got it all set up, it crashed Firefox and I had to start over again.  Grrrr.

But I found a work-around and got the postcard printed and started off on my voyage of discovery.  The very first thing I saw on my walk around the block was Lizzie sitting in the window staring at me.

(I know she was upset because I didn't give her a treat before I left!)

But then I looked across the street and saw this:

At first I thought someone had TP'd the yard, but then I noticed that the whole lawn was decorated for a spooky Halloween.  This and one other tree were covered in a kind of foamy white which I guess was supposed to be a spider web, though it looked more like cotton candy.

In the driveway of the house across the street I saw a pomegranate lying there, cracked and already showing signs of decay.  On the porch of that house were 2 fresh pumpkins.  They were the Laurel and Hardy of pumpkins, one tall and thin, the other short and fat.  A little farther down the street was a house with jack-o-lanterns on the porch, but those were artificial.

I passed an old man in a motorized wheelchair being helped into the car by what I presume was his son.  I didn't take a picture!

Several yards had tricycles or big wheels and I saw a woman pushing a stroller, which I thought a nice contrast to the son putting his elderly father into a car.

I passed three basketball hoops set into concrete in tires and at the same house where one of those was I also saw a skateboard ramp.

Across the street from this was a real tree that had been TPd, not just for Halloween and across from that was a macrame hammock hanging from a tree.

There are lots of little metal coverings over cable wires and stuff.   They look like gigantic green pills cut in half and stuck in the ground, but one house had discovered how to make theirs look less "technical" and more artistic.

(Unfortunately right near that was a discarded cigarette lighter someone had thrown in the bushes...actually the only sign of smoking I saw on the walk--no cigarette butts.  We are a politically correct city, after all!)
The last thing I noticed, but didn't put on the post card because it would require too much explanation was this traffic sign.

Many years ago Villanova Drive was a big wide thoroughfare and a race track for students coming from the nearby high school.  At least once a year for the first several years we lived here there was an auto accident from people taking the little curve in the street too fast.  One of those accidents sent a car careening into our front yard and landing atop our recently planted tree.

The bad year was the year that a car went out of control, ran through the wall of a house and came to rest at the foot of a little girl's bed, setting the house on fire.  The fire was put out and all of the people in the house were safe (though I think the cat died in the fire), but following that accident we had neighborhood meetings with representatives of the city trying to figure out a way to slow the traffic.   The city said speed bumps could not be put in (though a few years later they were put in on other streets) and they finally settled on planting trees in the middle of the street. 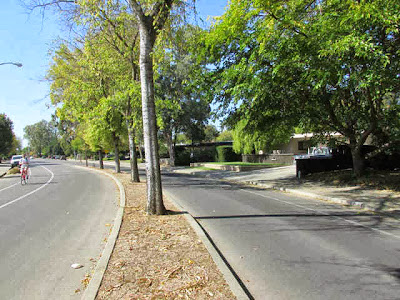 This actually must have helped because we have not had a big accident since that was done, though it is a slight inconvenience for those of us on this side ot the street because we had to eliminate parking on this side...but there is always room for one or two more cars in our driveway.

But one of the other suggestions was to lower the speed limit to 20 mph on the curve.  Apparently that was not possible, for some legal reasons, but they said that they could put up this sign, which would be a warning to slow down, but if people went 25 mph they could not be ticketed.  I don't think anybody knows that and people do slow down, which I guess has also helped kill the accident rate around here.

When I got back from my walk, Lizzie was here demanding her treat.   I finished writing my postcard and realized that I could actually make a journal entry out of it too (only the journal entry is better because it can include photos).
Posted by Bev Sykes at 12:00 AM

Email ThisBlogThis!Share to TwitterShare to FacebookShare to Pinterest
Labels: walk

A very good walk -- excellent and interesting way to spend whatever time it took. And it made a good journal entry.

I agree with June - a good way to make ourselves really LOOK at our surroundings. I'd like to think I'd walk in our neighborhood, if we didn't live on such a steep hill. (Yeah, right!)