For those who have never watched Breaking Bad, it's the story of Walter White, a high school chemistry teacher who learns he has inoperable lung cancer.  He has a wife, a teen age son with cerebral palsy, an unplanned baby on the way and is already in debt.  He learns that aggressive treatment of his cancer will cost a fortune, which his wife wants to pay to prolong his life.  He wants to leave his family financially stable when he dies.

On a ride-along with his brother-in-law, who works for the DEA, Walter sees a former student fleeing a raid on a local meth lab.  Walter contacts him and the two collaborate on cooking methamphetamine, which, because of Walter's chemist background and his insistence on cleanliness in his lab, becomes desirable because it is significantly more pure than anything else on the black market.

[disclaimer:  before this series, I had no idea that methamphetamine had to be "cooked," that there were levels of purity, and that the more pure the drug, the better the high.  Whoda thunk I would have cared about these things!]

Over the five seasons, we see Walter becoming the drug king "Heisenberg" who, gradually begins to enjoy his empire-building role which includes many immoral things that the original Walter would never have envisioned.   He eventually drives his family away.  More would be a spoiler and I don't want to do that.  This is about my watching yesterday.

My day started at 3 a.m, when I found myself wide awake.   Reading all the hoopla building up to the Breaking Bad finale, and strong encouragement by Ned over the years to watch this program, and signing up for Netflix's streaming video service, I had started watching Breaking Bad on my iPad a week ago.  I had made it all the way through Season One and was into Season Two when I discovered that AMC was doing a Breaking Bad marathon, running all five seasons, in order, ending with the finale at 9 p.m.  Watching it on TV rather than on my iPad was appealing because that meant I could watch either in the family room, or in my office, as I worked at my computer.

At the time I discovered the marathon, it was already into Season Three.  I knew I couldn't watch all of Season Two and catch up with AMC, so I decided to skip watching Season Two and just plunge into Season Three (of five).  I got an overall view of what happened in the second season by reading a synopsis on line so I kinda sorta know how they got where they were when I started watching AMC. (Ned is appalled that I skiped a pivotal season.)

Walt knew that I was going to be immersed in Breaking Bad all day and was very tolerant.  I watched until time to go to brunch at Atria, with Ned and Marta.  (I recorded all the shows from when we left until the finale so I wouldn't miss anything.)

It was probably a good thing that I was in the middle of this marathon (and Ned was very impressed that I was going to do so much in one day!) because Ned is such a fan that he has watched every episode a dozen times and knows all the minute details that would escape a viewer on the first or even second watching.

Since my mother has such a hard time participating in a conversation, I think that it was a good thing that she could sit with us and listen to Ned expound on his favorite show without having to contribute anything (other than snorting that she didn't watch the show).  He gave me a detailed explanation of all the things I missed by not watching most of Season Two...which ended up being a good thing because at the end, I had plot holes filled in for me because Ned had explained them to me.

We got home from Atria around 2:30 and I dove right back into Breaking Bad again, while Walt tipped toed around not bothering me.

At 7 p.m., at the end of whatever episode it was, I turned it off so we could watch the opening episode of The Amazing Race, then I turned Breaking Bad on again.  I did a cop-out dinner, boiling pasta (the last of my Barilla) and pouring pre-made spaghetti sauce over it.  Walt, bless him, did not complain.

There were four more episodes before the season ended and by the time dinner was over, Walt was kind of into the show too, though he asked a lot of questions about or what so and so was.  I had hoped to watch the finale with the rest of America, but I wasn't there yet in watching my pre-recorded shows.  We sat here until 12:30, when the show finally ended.

I was pleased this morning to discover that 80+% of American fans agreed with me that it was a good ending and that it did all that it promised to do, tying up all sorts of loose ends.  Again, not revealing any spoilers.

I'm glad that even though I was five years late to the party, I ended up a fan and could appreciate the tension of the last season.

What I've learned from Breaking Bad, other than what I listed in the "disclaimer" above:  Walter spends more time digging holes in the desert than he does cooking meth.  Choose carefully when buying a container in which to melt a body with acid.  It's impossible to launder $7 million+. None of the drug dealers ever seem to actually spend any money.  The stacks grow taller and taller, but nobody seems to see it as "money," but more just something to collect.

And finally ... probably not a good idea to buy your child a pink teddy bear. 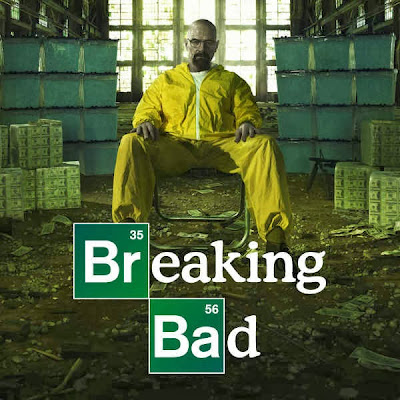 Good bye, Walter -- our relationship was brief, but memorable!
Posted by Bev Sykes at 9:57 AM

BRAVO! I am super impressed that you watched the entire (okay, MOST) of the series in order prior to the finale. :) I loved every minute of Breaking Bad! Ironically, season two sat in my dvr unwatched for a VERY long time before I finally dug into it. It was a gem of a show.