Long before we went on our trip to Ukraine, I purchased he book, "Babi Yar," by A. Anatoli (Kuznetsov). intending to read it so I would know something about that place when we visited.  In truth, I had heard the term for many years, but didn't have a clue what it was, whether a mountain, a river, or a building.

From the book, I learned that it was a deep ravine in the middle of Kiev where the Nazis had killed many Jews.  I wanted to know more, but somehow the thickness of the book and my preference to read mental cotton candy at the time prevented me from even starting it.

When we got to Kiev and were standing at the site of Babi Yar and I was listening to our tour guide, I was kicking myself for not having read the book first.

When we were there it seemed a lovely sylvan setting and difficult to visualize the things that went on there.  We only stood at this one end.  The ravine actually stretched for a mile.

After we returned, I started reading "Babi Yar," and found it was a book I could not take in large chunks, but would have to read awhile and then set it aside and then go back to it.  Logos was great for that, because I have taken it to work with me for the past 3 weeks and finally got to where I needed to finish it, and so read the last couple of chapters here.  When I finished, I decided that it was fortunate that I had not read it before we left.  It was so much more vivid now, having been to the site and seeing what the area looks like today.

The author was 12 when the Nazis came to Kiev and somehow he survived those years of torture and oppression and made up his mind that he would one day let the world know what it was like to live through it, and the things that the people of Kiev and the surrounding area had to do to survive. The book was heavily censored by the Soviets when it was first published, but was re-published in 1969 in an uncensored form after the author's defection to England (bringing with him all of his notes)

Towards the end of the book, the author writes, "I cannot for the life of me understand why, on this beautiful, blessed earth--among people equipped with brains and the capacity to think, who are not just animals with instsincts, among thinking, understanding beings--it is possible for people to indulge in such absolute madness as war, dictatorship, police terror, to kill each other and to humiliate each other sadistically."

The conditions under which those who were not slaughtered at Babi Yar were forced to live made me realize why the Nazis could get away with their exterminations without the objection of those who knew it was going on.  The first two days, 33,771 Jews who thought they were being relocated to Palestine, were stripped naked, and exterminated at the edge Babi Yar, their bodies falling into the pit. Over the next two years, the Nazis continued to kill...well, just about anybody they wanted -- gypsies, the mentally ill, and sometimes a hundred people would be chose at random to be punished for the misdeeds of one or two people.  It is estimated that over 100,000 met their deaths in the ravine.  It is the largest massacre on record for the war.

The killings became so commonplace that for people who had to survive on, if they were lucky, one loaf of bread a week for a family and whose whole life was trying to exist one more day, escape one more raid, dodge bullets, put out fires, etc., the sounds of machine guns at Babi Yar were just a part of everyday life in this new hell in which they were living.

There are scenes in this book of torture so egregious that you cannot believe it.  It's hard to know how a people can survive anything so terrible.

When the war was winding down and the Nazis knew they were losing, they tried to hide the evidence of their massacres.  Prisoners were sent into the pit to haul up bodies, which were stacked on gravestones taken from the Jewish cemetery.   The bodies were placed, side by side, horizontally, then vertically on top, then wood on top of that and repeat until the stack was ten feet high.  Then it was doused with accelerant and burned, thick black smoke filling the skies over Kiev.  The ashes were examined for remaining jewelry and gold teeth and then it was done again.  It's difficult to hide the remains of 100,000 victims.

The U.S.S.R. decided to remove all evidence of Babi Yar from history.   They built a dam across the end of the ravine and proceeded to pump pulp (a mixture of water and mud) into it through pipes from the neighboring brickwork quarries.  The ravine was turned into a lake.  The idea was that the mud would separate and settle, while the water would flow away through the channels in the dam.  And it actually did for several years.  Each year the dam was strengthened and increased in height until by 1961 it was the height of a six story building.

And then in March of 1961, it collapsed.  A wall of liquid and mud thirty feet high poured out of the mouth of Babi Yar.  Eye witnesses who managed to escape and who watched from a distance say that the wall of mud "burst out of the ravine with the speed of an express train and that no one could get out of its way."   Hundreds were smothered in half a minute.

The police cordoned off the whole area and took care that nobody took photographs.  Helicopters were forbidden to fly over and the affected area was hidden behind high walls.  It took two years for all the bodies to be recovered.

Today Babi Yar is a lovely park, with several memorials to all the people who perished there.  When we were there, I found it odd to see mothers and children playing in the playground which covers the grave of so many.

It is said that we must never forget the victims of the Holocaust because if we remember, it can never happen again.  But it has happened again in places like Rwanda and Congo.  It is happening in other places in Africa and perhaps other areas around the world.  I don't know what there is about being put in power over helpless people that turns men into monsters who can treat other human beings worse than they would treat an animal.

There is a Babi Yar memorial video on YouTube (well, there are several), which I watched after I finished the book.  It was very moving, but more striking to me was the horrible, horrible, horrible comments made by people in reaction to the video.  It makes me realize that the Nazis were not alone in their ability to be killing monsters. Given the opportunity such a thing could happen here.  And how would those who are not immediately affected respond...?

My heart often hurts for the human race. 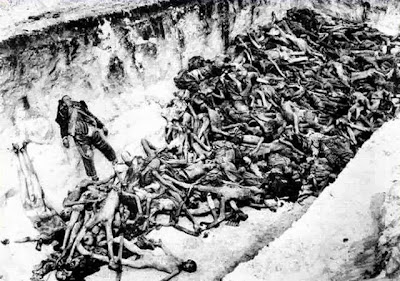 We are humans. We think, we feel, we hurt- and so we hurt others. I don't believe that people are just born with the desire to harm other people. I think something happens along the way. When you feel a disconnect to others the thought of their harm doesn't bother you so much. Technology isn't helping this situation either.

The ability to harm never surprises me. Acts of kindness, generosity, and goodness of the human spirit does. That's the subject I like to wonder about.

This is so horrible. Thank you for writing this article. I would never have known about Babi Yar if it wasn't for you. The Holocaust was such a terrible time in our world. Like you, I can't imagine how the Nazis managed to lose their humanity and do such atrocious deeds to their fellow men. I agree that we must not forget.