Alcoholics are famous for saying "if you want to make God laugh, just tell her what your plans are for the day."  God is having a jolly good time tonight laughing at all the curves she threw me.

My plans:  Have "high tea" with my friend Ruth, then pass by Kaiser to have my blood pressure re-taken, now that I've been back on my medications for a week.

What could go wrong?

Well the first thing wasn't exactly something going wrong but I was going to read for half an hour before leaving, and then fell asleep, waking with a start 15 minutes before our reservations were.  I got dressed and raced off to Ciocolat, which is fortunately nearby,  and found Ruth waiting for me. 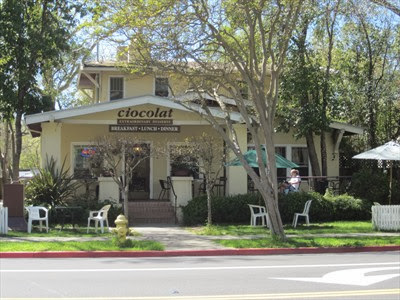 Let me talk about high tea.  It's a nice, genteel concept that reminds us of a bygone era.  Lovely china, lovely tablecloth, delicious tea, and usually a very nice presentation on a triple-layered tray.  I love high tea in England, where they do it right and I don't remember having to mortgage the farm to pay for it.  They also have the very best scones ever.  Everywhere there are wonderful scones.  In this country we don't know how to do proper scones, though Ciocolat's are better than most.

Ciocolat is a small place, so there is nowhere to put the three-tiered tray, so you get served three courses, and then a "surprise" fourth course.  If you go to a place like the tea room in Dixon, where I took my mother, you may find ladies (and sometimes daughters or granddaughters) dressed to the 9s, pinkies extended, enjoying the food.

But what "high tea" is is damned expensive!!!  Susan, from Logos, took Char, me, Susan's sister, and herself to a tea house near the book store and it cost her over $100 for the four of us.  I only go to high tea when I have a darn good discount.  Today's tea cost $32, with a Groupon discount, which is in itself expensive, but when the bill came and the waiter added the value of the meal (so I knew how much to tip), it was $76 for two of us.  What you get for $76 is 2   small scones each, with a tiny pot of lemon curd, three finger sandwiches, 3 tiny (but very rich) desserts, and some berries with cream.  And the tea.  But it's the ambience that you are paying for, and I enjoyed the ambience.

Our first course was the scones...white chocolate and cranberry scones with that lemon curd.  Ruth ate both of hers, I only ate one and was happy, later, that I brought home the second scone.  I didn't take pictures of the scones, but I went to take a picture of the sandwich plate and discovered that my camera batteries were dead, but at least I had the cell phone.

They were all very tasty.  This was followed by our dessert plate.

The frosting was to die for, and the chocolate thing with the expresso bean on top was also close to committing suicide for. I'm not a huge fan of hazelnuts, though they are OK, so the chocolate cup was OK, but not up to the standard of the other two.

Then there was the "surprise" course, which was a bowl of chantilly cream (sweetened whipped cream) with berries.  A bit too sweet, I say, surprisingly, but it was great.  We couldn't finish it. 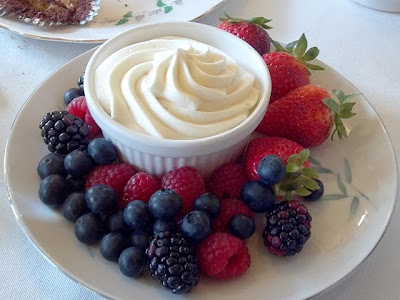 I drove out to Kaiser to get my blood rechecked.  When I was there last week with my mother, for our flu shots, I stopped by to get the pressure taken and it was very high (156/90-something).  I admitted I had not been taking my blood pressure medication.  The technician wanted to send me to the nurse, but I told her I had my mother with me and it would be difficult,but I promised I would get back on my meds and return early this week for a recheck. (Given how today went, I am SO glad I said that!!!)

I have been faithfully taking my meds since.  And it showed.   When I got there, the BP was only 113/62, which delighted the technician.  But my pulse was 117 and her instructions say that she can't let me go without seeing a nurse unless the pulse is under 111.  I was alone today, so I dutifully went down and registered to see a nurse.  I waited about 20 minutes and was taken into a room and seated in the most uncomfortable chair in the world.

She went to find a doctor and I was left with nothing to read.   I had brought neither my Kindle nor a book to read (because I was only going to be there a couple of minutes.)  Not only did I have nothing to read, but my cell phone battery, which was nearly full when I left home now appeared to be empty, so I couldn't do any internet stuff..  I dashed off a quick text message to Walt and then shut the phone down.  And I waited.
and waited.

At one point I almost went out and got a collection of brochures they give to patients about various maladies, because I'd read all the signs on all the walls and machines.

An hour later, nurses were asking me if I had been forgotten and were going off to find the nurse who plunked me there and then came back to report that the doctor was busy.

Finally, after an hour and 15+ minutes, the doctor arrived, telling me my paperwork had gotten buried and he didn't realize I had been waiting.  He also agreed that the chair was, indeed, the most uncomfortable chair in the world--and that the only thing that was more uncomfortable was a gurney. He took my blood pressure and...whaddya know.   It was high.  He asked questions, then he went off to check previous readings that had been done in the last six months.  Whaddya know...they are ALL high (except today's was a little higher).  He said he wanted to get a heart x-ray and some lab tests done, so sent me off to x-ray and to the lab.  I came back looking like a zombie.

But finally, at 4 p.m., just about 3 hours after I had stopped by "for a minute" to get my blood pressure taken, I was out of Kaiser and back in the car, hungrily chomping down my leftover scone and heading home where I could replace my camera battery, recharge my cell phone, and get something to read.

I host a yearly tea party at my home. Scones, sandwiches, yummy tea, the whole nine yards. I make it a big ordeal because I only am able to host it once a year. I have been to a local tea house once and it did cost a fortune and I haven't gone since.

Sorry to hear that your Kaiser appt turned into such a long day. :(