The Golden Girls and the Giants

That sounds like the title of some kids' book, but it's actually a literal title.

In the morning, I went to Atria to bring my mother her laundry, which I had done the night before.  It as a real shock to have her open her door and show three women sitting there visiting with her.  Well that was progress!!  But then she introduced me to one of them (she couldn't remember the name of the other two).   It was a good friend of hers, a former bank colleague, whom I had not seen in so long I wouldn't never have recognized her.  The women had been visiting relatives in a nearby town and decided to stop and visit my mother as well.

I sat there listening to them and realized, with a laugh that I was hearing The Golden Girls.  The three women have lived together for years and run a business together.  One of them was tall, very intelligent, and did most of the talking.  Dorothy, obviously.  Another was perfectly coiffed and more quiet and while not exuding sexual overtones, she was very definitely Blanche, which made the remaining one Rose (and I guess my mother as Sofia).  I enjoyed my mental image as I watched the four women enjoying their visit.  The nice thing about visits like these for my mother is that when you have someone like "Dorothy" taking over the conversation, my mother can laugh and enjoy herself and doesn't have to reveal the extent of her memory loss.

In the afternoon, Walt and I drove down to Walnut Creek, where we left the car at the BART station and took rapid transit to AT&T Park, where we were meeting Jeri and Phil and other friends to go to a Giants-Red Sox game.  I figured that with us rooting for the Giants and Jeri & Phil fans of the Red Sox, somebody was going to go home happy,

We got there earlier than expected and had time to kill, so I stopped by the Giants' store and finally got myself a Giants t-shirt, which I have been wanting for a long time--and even found one for sale.

It was perfect in the park, with our seats giving us a sweeping view of the Bay and the low-lying fog creeping into the financial district.

We had left 103 degree heat in Davis and it was delicious to shiver as the night fell and the air began to get cold.  Fortnately, with my 2 layers of shirts and my jacket, I was comfortable.

The Giants didn't do well though.  It's never a good sign when your team looks like this on the field.

Jeri was not at all gracious as she watched us go down to defeat.

But the evening wasn't a total loss.  There was a full moon and with my new camera, I was able to find the setting that would allow me to get the photo I've been trying to get with a point-and-shoot camera for years.

Starting at around the 6th inning, the seagulls began arriving, circling the field over and over again, trying to tell all of us humans that it was time for us to leave their park and let them do some clean up of all of our leftover nachos, hot dogs, and soft pretzels.  I tried to get a picture of them, but they were too fast.  But as the park began to empty after the game, they really took over and it was easy.

We took BART back to the car and came home.  I discovered as I got out of the car and was so completely exhausted that I staggered  right to the couch, went to sleep almost instantly and for the first time in so long I can't remember, I slept 7 hours without waking once. 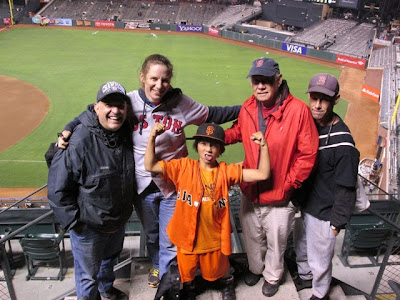 Email ThisBlogThis!Share to TwitterShare to FacebookShare to Pinterest
Labels: Giants