Alone and Hryvnia-Less in Kiev

After our huge breakfast this morning (we'd have to stay here at least a week to sample all of our options!), we went outside to (a) check how bad the rain was and (b) look at what it was that we were seeing when we arrived last night. 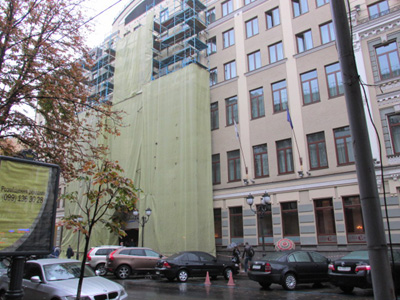 The activity for the day was to take a walking tour of Kiev.  It was raining, but not badly.  I did not take a jacket, but brought a poncho.  I was loving the sensation of cold and wet!  When our group started out, Mike and Char weren't there.  We didn't know what happened to them and were worried as we walked along and still no Blackfords.  We saw lots of interesting buildings, most of which I lost the description of because I was hanging back, watching for Mike and Char.  But I did take pictures.  This building, for example has been a few types of theaters.  It may have started out as a synagogue but I didn't hear that part. 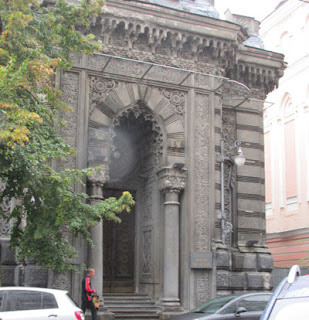 Later, when I was able to get close to it, I saw that this is the sign posted at the front right of the stairs. 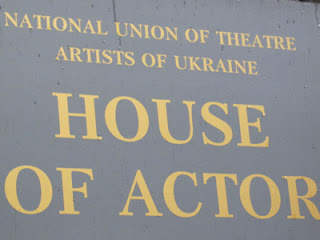 We traveled along to Kiev's "Golden Gate" (no resemblance to San Francisco's!) 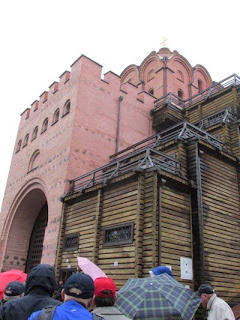 Built by Yaraslav the Wise (same guy who founded the town of Yaroslavl in Russia, which we visited 4 yrs ago) in 1017-1024, it was one of three gates that gave entrance to the then-walled city. It was officially known as the Great Gate of Kiev and is now the Golden Gate of Kiev because of its golden domes (not shown here).

As we were leaving the Golden Gate, Walt spied a stand selling water and he figured I'd want some (good guy!). The group moved on while I held back waiting for him, trying to see where the group had gone so we could catch up.  Turned out the clerk at the stand had to go to another stand to get him change and by the time he finally rejoined me, the group had disappeared.  He went racing off to find them and I stayed behind to get more pix of the Golden Gate. 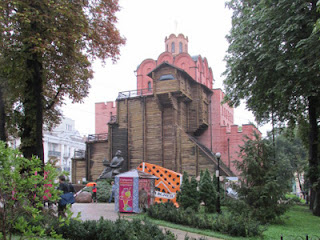 Walt finally returned, huffing and puffing, and said the group was 2 blocks away.  By the time we reached the place where he could see them, they were about 3 blocks away.  I decided there was no way I would ever catch up and told Walt to go on and I would meet him back at the hotel.  I was sorry to miss the tour, but the same tour is being given to people on the ship in 2 days and maybe I can take it then.  But I was able to take some nice pictures myself, on the way back to the hotel.  Like this cat, made out of plastic forks, for example. 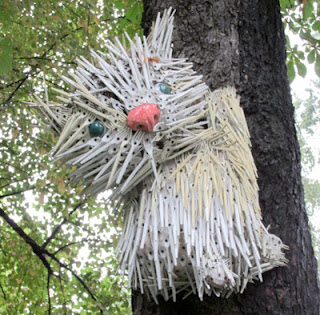 and this wedding limo, apparently at the Golden Gate to take wedding pictures.  It was raining and the bride was inside the car crying.  I would have taken better pix, but I didn't want to intrude. 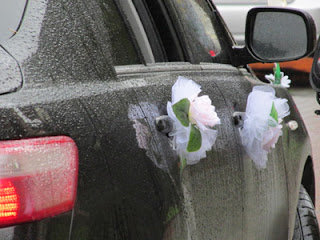 I realized that I was all alone, in a country where I did not speak the language.  I had no hryvnia (the local currency) but fortunately I did know how to get back to the hotel, since we hadn't gone off the main street. I decided to just enjoy being alone.


I liked this view of a statue inside the grounds of the home of the Indian ambassador.  Our tour guide told us that the building had once been the office of the doctor who first identified myocardial infarction (but I don't remember his name). 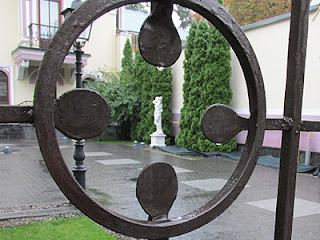 Back at the hotel, I tried to watch the next episode of Orange is the New Black on my iPad, but Ukraine doesn't get Netflix, so that didn't work.  I lay down on the bed for "a few seconds" and must have slept an hour.  I was surprised since I had a good night's sleep...in the bed!

It sounds like the tour was extensive...and exhaustive.  Char says she may never walk again, so I guess it was a good thing that I told Walt to go on without me.  (We learned, by the way, that Char and Mike were in a different tour group, which Walt finally joined--I hadn't realized there was more than one group).

We had a mid-afternoon meal...not sure if it was a late lunch or an early dinner.  We picked a place at random and discovered it was just charming, or as charming as a dungeon can get!  You walk down some rickety steps to the lower dining room (we were the only customers there), which is decorated with replicas of costumes and implements of war, probably from medieval times. 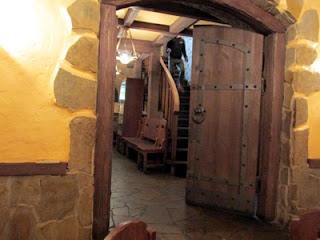 We had a difficult time interpreting the menu... 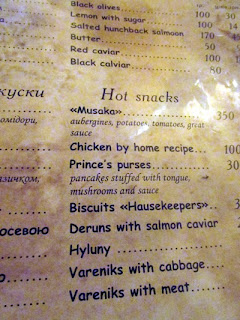 so the waiter gave his recommendation, which was veal with a cherry sauce which was delicious. The potatoes, liberally sprinkled with dill, were even more delicious. 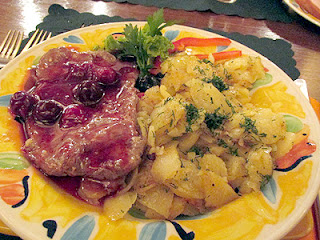 (Someone on facebook asked if we had the Deruns.  I told her we were trying to avoid deruns, though the guide book tells us to expect a bout of it.  We don't use local water for anything, even brushing teeth.  The room is filled with bottles of water.) 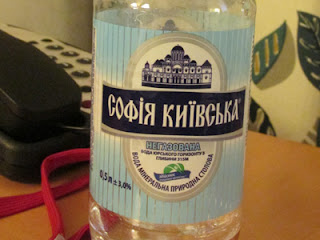 When we got back, Walt went out for a walk.  While he was gone, I discovered that my camera was taking pictures at the wrong size and tried for more than half an hour to figure out how to change it back to what it had been before.  Desperate, I posted a message on facebook and within 10 minutes, my friend Ron, in New York, had answered and showed me how to do it.  I love the internet!

We decided lunch was so big, we didn't need a real dinner, so we just went to the hotel bar, got some drinks and bar food.  Char didn't have anything to eat, but Walt had borscht, Mike had a burger, I got some deruns, because it said on the menu they were potato pancakes.  So now I know!  They were delicious, and served with sour cream. 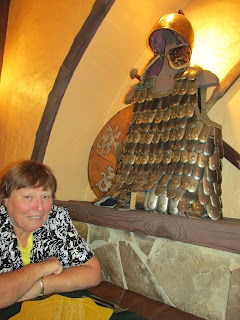 Char and friend at lunch

I always love your travelogues, and probably won't make this trip.

Ah, so that's the Great Gate of Kiev, as in Mousorky's (sorry about spelling) "Pictures at an Exhibition"
--martial drumming, warriors in armor as in Char's picture.