I don't mean to cast aspersions on what I am certain is a beautiful city, but we arrived here after 11 p.m., in pouring rain, so all we have seen is the city in the dark, through the rain.  I saw 3 McDonald's between the airport and here and the downtown is absolutely lovely lit up like it is Christmas time.  I hope I get a chance to take pictures of the floating leaves over the town center before we leave--it won't be the same in daylight.

We left home around 2 p.m., I guess (it seems like it was a week ago!) and drove down to Mike and Char's to get them.  On the way down we saw this historic sign, never seen in my lifetime and never to be seen again in my lifetime, I assume. 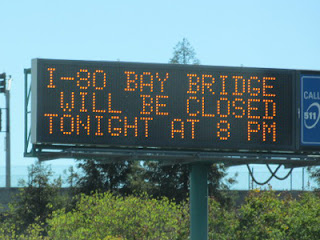 You may recall that little temblor we had some 24 yrs ago, when part of the Bay Bridge collapsed.  It was determined at that time that we needed a new bridge and now, just a short 24 years later, the span is ready to open, so they are completely shutting down the bridge for several days in order to make the new bridge ready to open.  We will miss the whole thing.  But at least I got the sign.
Driving down to the airport from Mike and Char's the city was so gorgeous, with the foggy accents between the city and Mt. Tamalpais.  It took me several attempts to get a good picture of it. 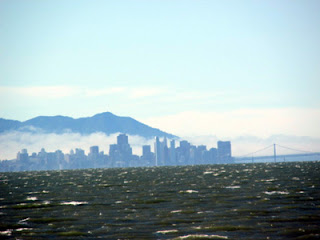 We got to the airport and Walt, Mike and Char gathered around the kiosk trying to figure out how to check in. 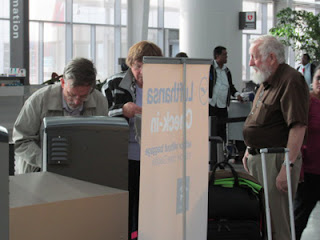 Then we went out to wait for our plane.  Some had told me Lufthansa was "the best," but you couldn't prove it by me.  Oh it wasn't any worse than any other airline, but nothing to write home about.  You barely had room to put your knees and that meant, on an 11 hr flight getting up a lot to let other people out to go to the bathroom.  I figure I got my exercise just getting up and down from my seat.

I was excited about the in-the-seat TV monitors but the selection was pure crap. 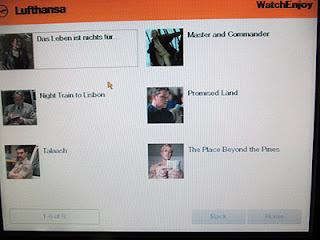 Some 30 movies ranging in "new" as The Place beyond the Pines down to When Harry Met Sally.  There was also some TV and nothing there I wanted to watch either.  Even The Big Bang Theory episode they chose was one I didn't like much.  I finished my book and started another.

The food was edible, but that's about all I can say for it.  For dinner we had pasta, which I figured would be easier to handle since I had to rest the dinner tray on my backpack since there was no room to lower the tray table. I don't expect gourmet cuisine on an airplane, but I had just finished reading "Orange is the New Black," which describes the horrible meals in women's prison ... and this would have made it as a possibility for one of those meals.  The pasta was undercooked in spots and stuck together in hard clumps.  The part with the sauce was better, but too highly spiced. 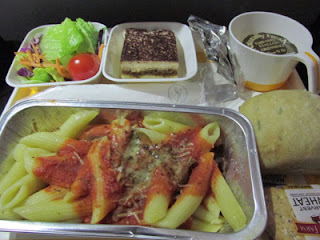 The roll was hard as a rock, but the dessert was good and I ate that.  I left half of the rest of the dinner.
Almost everybody went to sleep after dinner, but I could not sleep for love or money. 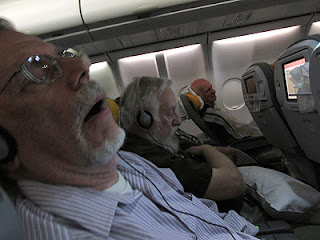 I decided to listen to the German cast recording of Sound of Music, which was interesting! 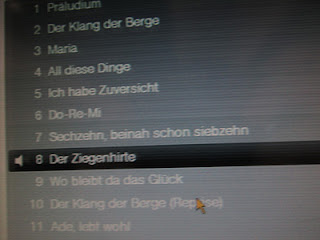 We changed planes in Munich and had two amazing experiences.  First, we were headed toward our gate when someone called me.  It was John and Martha Vlahos, from the Lamplighters.  John was board president for decades and he and Martha both sang in shows for a very long time (which is how they met, actually).  They are returning from a vacation in Switzerland with 3 days in Berlin and were as shocked to see us as we were to see them.

We joined Mike and Char at the gate, where we all found a wifi hot spot and took advantage of it. 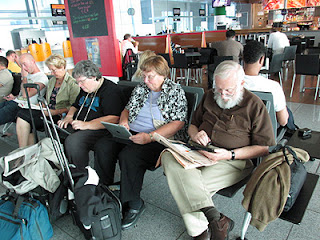 Then as we were sitting at our gate came a loudspeaker announcement calling for passenger Lee Foster to get to his gate.  Lee is Laurel's brother and we knew he was traveling to Ukraine (not Kiev) today but had no idea we would be in the same airport.  It was too late to catch him and say hello, but we did send Tom a text message about it!

We boarded the plane with what seemed like 30 grade school kids.  I don't know where they all came from.  Most were very good but the two boys in front of us talked (LOUDLY) throughout the whole 2 hr flight.
When we arrived it was after dark and it was pouring rain.  Getting our luggage and going out of the airport was no trouble and we met our Viking escort, Irina, who took us to the hotel (there were 4 Viking couples on the flight.  Besides the 4 of us, there is a couple from Reno and one from the area where Mike and Char live.)

Of course seeing a city after dark, in the rain, is useless.  It looked just like driving through Prague after dark on our way to the folk festival, or driving around Florence at night.  (And we passed 3 McDonald's between here and the airport.)  By the time we got to the city center, though it was beautiful, lit up in decorative lights as if it were Christmas.  We will be there tomorrow on our walking tour, I think, but it won't be the same as seeing it at night.

It is predicted to rain for the next 3 days.  Some are upset about it.  I really don't care much.  I'm loving the cold and the rain, but it may affect our desire to do the 3 hour tour of a traditional village, as it is an outdoor tour.

Viking always put us up in 5 star hotels.  This may be 5 stars, but it is five tiny stars. 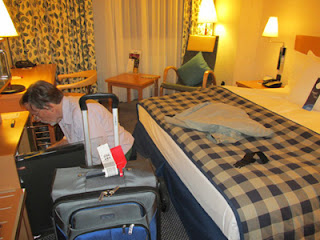 We are pretty cramped here, but it's only for 2 nights before we transfer to the ship.  The beautiful hotel I posted a picture of a few days back is under construction and is covered with plastic, with street torn up and doors hanging off the side.  I don't know what kind of view we have because our window is set a ways back from the room... 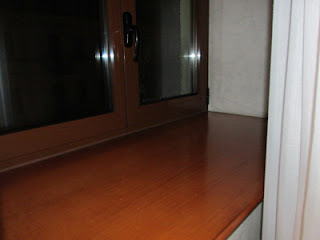 ...and since it's dark outside, you'd have to climb up and stand on the ledge to actually see anything.  I think I'd rather see it tomorrow.

I think it's about 3 p.m. California time, but since I haven't slept in 3 days, I think I'm going to have NO trouble getting onto Ukrainian time tonight.  I'll either sleep like a baby...or not at all.  Either is a possibility!! 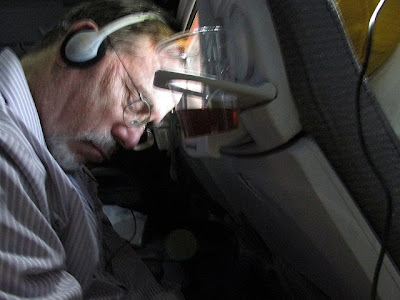