Today was a very good day.

For one thing, I slept well.  For another, the facilitator of the Brain Gym is on vacation, so we had the day off.  We had gone to see The King and I last night and so it was nice to have "nothing" to look forward to.
At intermission of the show, for some reason I decided to check my cell phone.  The ringer was off and I rarely get calls, especially at night, so I'm not sure why I decided to check it, but there was a missed call symbol and a voice mail from a friend of my mothers, a woman named Phyllis.  She and my mother's best friend Paula had been trying to reach her.  Paula and her niece had made plans to come and visit my mother today and take her out to lunch and were concerned that nobody was answering her phone, nobody was answering my phone and the front desk at Atria was not at all helpful.

It was almost time for the lights to come down for Act 2, but I was able to make a hurried call to Phyllis to assure her that were all fine and that my mother was with me and would be home to greet Paula the next morning.

During the rest of the evening my mother must have talked about Paula coming a dozen times.  I'd say something about it and she'd seem surprised as if she had not heard it before.  When we dropped her off at the door, I helped her open the outside door (which locks at 8) and then said "Say hello to Paula for me."   She turned and said "Paula?  Am  I going to see Paula?"

This morning Paula called me around 9 to verify that yes, my mother would be home.  I gave her directions for getting to Atria and she said she expected to be there around 11:45.  I was going to take the day off, then, but remembered Walt, who had gone to see her the day before, said that she was out of toilet paper and I decided I should take care of that before Paula got there in case she needed to use the bathroom.

I went and picked up toilet paper and drove to Atria.  The girl at the front desk gave me a pile of pants my mother had brought to the desk, saying they did not belong to her.  Caught!  They were pairs I had snuck into her laundry last week, but I had snuck in four pairs of pants, so one of them made it through (and she was wearing them when I got there).

My mother was asleep when I got there so I put away the things I'd picked up for her.  When she woke up she asked if we had anything to do today.   I reminded her Paula and her niece were coming for lunch.  "Oh?  I didn't know that.  Nobody ever told me."

We waited and waited and waited and no Paula.  She has no cell phone, so I couldn't call her.  Finally at 1:15 we decided to go to the dining room.  I left a message for Paula and her niece and we went to lunch, sitting somewhere where we could watch the front desk.
We could also see out to the garden.  This is the garden that my mother's apartment looks out onto.  Her apartment would be on the left about the first full doorway that you can see.  I just love that she has this garden to look out on, and to sit on her patio and enjoy, when the weather is good.

It was nearly 2 p.m., when we were finishing our lunch, when my mother spied Paula and her niece coming in the front door and I went out to catch them (they were headed in the wrong direction anyway).  They had taken a wrong turn and it took awhile before they realized it, but they were there.

My mother and Paula used to be nearly inseparable.  They had dinner together regularly, went to a couple of movies a week together and volunteered together at the Hospice of Marin thrift store.  They were also both part of a mah jong group that met every other week and was one of my mother's favorite things.

But things at the thrift shop changed, one of the mah jong group died and another began to develop Alzheimers. Paula and my mother continued to get together, but my mother found that Paula's habit of talking a lot bothered her, plus Paula, being 10 years younger than my mother, had more stamina and my mother couldn't keep up any longer so things had cooled.

But she was thrilled to see Paula today.  And Paula's jabbering was great because all my mother had to do was listen, laugh, and say something when she could jump in.  It was not blatantly obvious that she didn't know many of the people Paula was talking about.  Paula didn't give her a chance to show how much she's forgotten.  She just sat there smiling broadly and laughing with her friend.  It was almost like she was normal again, for a moment. 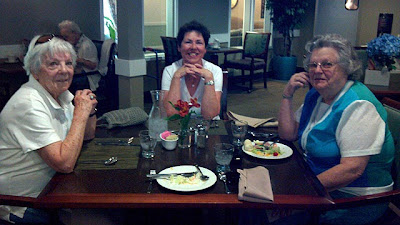 We went back to the apartment and Paula and her niece started talking about all the things my mother could do and asking her if she was exercising, etc.   I don't think my mother gave a single truthful answer, but she probably thought she was telling the truth.  Yes, of course she exercises (she has never been on the second floor, where the exercise room is and wouldn't use an exercise machine to save her soul).   Yes, she takes walks regularly (she can't walk to the back of the property without pain and hasn't left the building except in our car since she got there).

They talked about how nice it was that she has a kitchen and she could cook lunch for them next time, unaware that because of her dementia she can't have a stove or microwave, even if she could remember how to cook, which she can't.

I finally decided I should just leave (especially since I still had groceries in the car, which was sitting in the sun).  I decided that it was better to let her be HER, whether it was a fantasy her or not.  And if Paula and her niece think she's doing just fine, so much the better.

Today I saw a mother I haven't seen in a long time and have missed sorely. It was good to have her back, even if only briefly.
Posted by Bev Sykes at 12:00 AM