Why so little visible gets done around here.  (My friend Sheri says it sounds like I have cleaning A.D.D.  I think she nailed it!)

Walt was going to be gone, so I decided I would finally get some cleaning/organizing done, since Jeri and Phil will be here next week, at least overnight the night they arrive.

I've been trying to get some of my office straightened out, so I started there.  That necessitated writing some letters so I could throw away some of the big pile of letters. I also had to scan some stuff from my Compassion kids.  I'm not sure how much time I spent doing "organizing" here, which really translates into "doing the stuff I would be doing anyway, but doing it with 'organization' as my intent."

I decided to do a load of laundry, which included the rug from the guest bathroom, so I decided while that was washing, I would clean the tiny bathroom.   Something in there is a jar of body lotion that Walt's mother gave me for Christmas in the years when I was still having Christmas dinners here at home, so it's at least 10 years old.  It has long ago turned to the consistency of water and I don't like the scent anyway, so I decided to throw it out.

But as I threw it out, I was thinking about the years when I had Christmas dinners here.  I passed by the kitchen table and saw a big package of napkins I'd taken from my mother's house.  When I went to put them away, I squeezed them next to my Christmas dishes, and realized that I'll probably never again have 24 (or even 12) people here for dinner and I wondered if any of the girls in the family would like the dishes.  So I stopped and came in here to write to Laurel, Marta and Jeri and offer them all (or half) of the dishes.

While I was doing that, I decided to empty some boxes in here and moved some white envelopes into a container where I keep my "active envelopes."   This meant rearranting everything in the stacks I plan to clean up at some point, but now they are neater (in my eyes, at least), so less pressing.  I moved some rolls of washi tape into a larger container, which I've been meaning to do, but now I have so much space left in that container I had to shop for more washi tape.

I took a big bag of stuff I'd taken from my mother's into the family room and started going through it.  It contained photos and her high school yearbooks, so I had to go through those.  I was also throwing paper stuff I decided not to keep into a bag and while at it, decided to clean off the table next to the chair where I was sitting.

I managed to get a lot of paper thrown out, but a lot of what is there is stacks of books and things that need to be saved...somewhere.  I came in here to find a place to put all the books (or a bag to put them in to take to Logos), but got distracted by deciding to start this journal entry.

Now I'm going to go back to the bathroom and see if I can finish cleaning it before the dryer stops and then see what else I will do before I poop out for the day.

If you were here yesterday and came here today, you wouldn't have a clue that I'd done a lick of cleaning today, but I have thrown away a whole bag of garbage and it's only taken me about 3 hours.  But I also  have new piles of things that has to go somewhere.

Two bags of garbage tossed (still makes no difference), Bathroom cleaned (including floor...rug so old, it doesn't look like it just came out of the dryer). 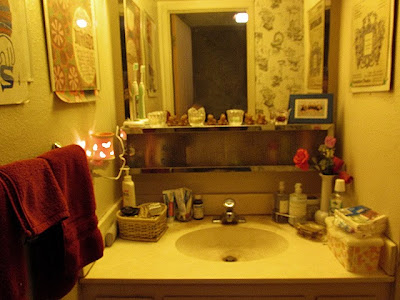 Kitchen table cleaned off.  THAT shows.

Called my mother and talked to her.  She remembered to get her hair done (yay!).  I told her I wouldn't be over because I was cleaning house. . She laughed.  Bitch.  :)

But I got a call from Compassion about one of my children who has aged out of the program and has a job, so I won't be writing to her any more. (sniff)   That made me want to write to my other children, and that takes about an hour.   But that's OK because my back wants me to sit down anyway.  Mailman also brought a letter from someone I needed to answer right away.  Writing is good.

Wrote two letters, fixed dinner, watched TV, folded laundry and here I am back at the computer again.  I feel like I accomplished some stuff today, but it sure doesn't look like it.

I thought about taking my mother to a Tomato Festival in Woodland tomorrow, but there are two problems with that.  First, it starts at 9 a.m. (or at least that is when the musical group I would be going to hear is playing (and that is too early to get my mother up and out), and second, I strongly suspect parking won't be available within a couple of blocks--and that's farther than she can walk.  She who doesn't need a walker.  Grrr.

(I tag each of these entries when I go to upload them and 99.9% of the time I'm just copying a tag that I used before. I've been keeping this blog for years and tonight was the very first tie I'd ever used the tag "cleaning.")
Posted by Bev Sykes at 12:00 AM

Offer your mom a wheelchair. She then might prefer a walker.

Or you might find yourself pushing a wheelchair. I did. But I suspect my husband is heavier than your mother. ;)

I always said that wheelchair was one of the best purchases I ever made.