Unaccustomed as I am...

I never speak at funerals.

I never speak for two reasons -- first I get terrified speaking in public and end up stumbling all over my words, no matter how eloquent they had been in my head, and second, when the deceased is someone I cared about, I am an emotional bucket of no self control. I, who cries at supermarket openings and Hallmark card commercials, am totally a soggy mess saying goodbye to the dearly beloved.

So I never speak at funerals, even when everybody around me is standing up and sharing memories of the deceased.

But this was Kathy.

And nobody asked me to speak, officially, but Peach indicated that she felt we would be expected to speak.

I knew I couldn't stand up and speak about how much she meant to me. I wouldn't get through the second sentence without blubbering, but I thought I could talk about Cousins Day.

I decided I would talk about the boob and how we have decided to retire the boob and put it in the place where Kathy usually sat, thus making her the permanent boob. I even brought the boob with me to use as a visual aid.

How scary could it be anyway? Mostly family. A small group. I could do this, I convinced myself.

Walt and I got the the VFW Hall (where the memorial service for Kathy's mother Barb had been held so many years ago) in time to help set up the tables.

The flowers Peach and I ordered from the Cousins Day group were there. I was very happy with the position of the 6 and 5 of hearts.

The family began to arrive. Kathy's son had flown in from Iowa with his wife and son, leaving the baby at home. He expressed sadness that his daughter would never know her grandmother and how he had talked about that with Kathy.

Kathy's brother had flown in from Arizona.

Cousin (actually first cousin once removed, if I have my relationships right--she is my late cousin Shirley's daughter) Denise and her sister, who live in the Bay Area, drove my mother to the funeral, along with Peach's daughter Karen. I sat with my mother at the table and she must have asked me ten times if I thought they were going to fill the hall.

By the time Kathy's son Brian, the MC, was ready to start things, by golly they had filled the hall. People from every area of her life loved our cousin and everybody had to be there to say goodbye.

Brian gave a wonderful eulogy, announcing at the start that there were to be no tears and that if there were, there would be pushups in the parking lot after the service was over. (Brian's a military man!)

Brian nicely outlined Kathy's life and her impact on her family and on her friends. His sister Karen spoke next, followed by Kathy's brother, Patrick, her sister Kelly and then ... gleep ... me.

The "small family gathering" was now a big hall filled with mostly strangers and I told Kathy she was just going to have to help me get through it.

She did. I could feel my voice quavering throughout my brief story about Cousins Day and about "65," but people laughed and that was good.

Peach followed me, with stories about their many craft projects, and also about Cousins Day (she had graciously let me go first)

Friends I didn't know talked about her. There were some brief emotional breaks in speech, but nobody really broke down, which I know would have pleased Kathy. The formal service ended with remarks from Kathy's husband.

Then there was a reception. Hey--remember those bread baskets Kathy and Peach made and were going to sell, after I got home from France? They gathered up all the unsold ones and used them for little nut cups on all the tables.

There was also a table of photos, repesenting (unintentionally) the number of hair styles Kathy had throughout the years, as well as some of her cross stitch projects.

And then it was over. I suppose I feel better than I have since Friday, since there is closure. It's difficult to face an ending without a real closure. Now it's time to move on to our next Cousins Day, where Kathy will now be the "permanent boob." 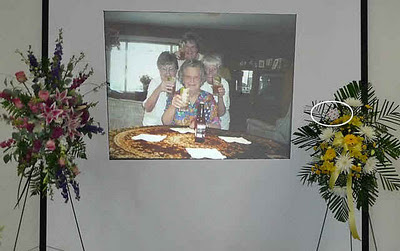 It sounds like an event that Kathy would've enjoyed. I know you'll miss her terribly.