Quote from the New York Times:

The deal is this: For the price of a $65 ticket, you play two games of bingo, receive a free bag of popcorn and experience the pleasure of watching surprisingly accomplished actors star in something that is clearly beneath their talents. Honestly, it could be worse.....With so much talent, this musical might even find an audience. If it does, the obvious question is, will canasta be next?

The show is called Bingo and is the latest cabaret offering at Sacramento's struggling downtown cabaret. I haven't really seen a show there yet that I've been enthusiastic about, and this one comes close to the bottom of the list for me. It's the story of four women who love to play Bingo and the feud that erupted between two of them many years ago. It's incredibly predictible. 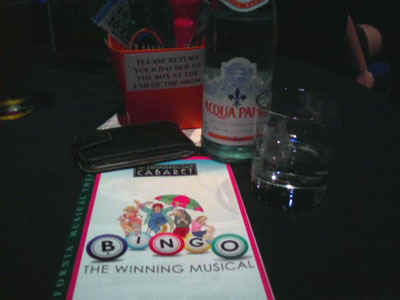 On the Bingo web site, where it lists pull quote from other reviewers, I saw one that got to me. It's from "Theater Mania" and it says "Bingo may well provide for middle-aged women what Wicked offers their adolescent daughters."

Don't. even. go. there, fella. You're treading on hallowed ground when you start comparing this show to Wicked. And I ain't no adolescent daughter!

But thinking about the NY Times review I was wondering if Peach and I should start thinking about 65, The Musical, based on the favorite card game of Cousins Days. It shouldn't be too hard to write. Bingo has two acts, but the second act's six songs contain FOUR reprises, so really you only have to write music for one act.

There would be the "hello how are you" number as we do our meet and greet dance, choreographed to include ice shakers, bottles of vodka and boxes of Kleenex.

Then we would have to set up the game with something clever like "Man alive, I need me some 65."

There would, of course be a reflective song as someone contemplates yet another bad hand and how come everyone else always seems to have more luck than she does. This is really Kathy's song and I'm sorry she won't be around to sing it.

We'd have to have a song about the boob and its importance in Cousins Day history.

The 11 o'clock number would be an angry number for my mother which would have lots of nice visuals like her giving someone the finger, wagging her nose at someone, and of course tossing the deck of the cards as the finale to the song. We could call it "Grannie's Lament" or something like that.

And we'd end with some sort of farewell number that would include lots of coins, putting the cards away for another day, and saying the long goodbyes. Maybe a tap dance number on top of a stack of quarters à la 42nd Street. (I can just see my mother, Peach and I tap dancing on anything!)

It's just a germ of an idea, but I can already see that it could easily rival the production of Bingo that I saw tonight.

Fortunately, the first part of my day was much more pleasant. Alison and I met with Melissa Wortman, one of the costumers/costumer designers/costume shop manager of the Lamplighters. As with all of the interviews we have done thus far, she was a delight, had prepared volumes of material to stimulate discussion, fantastic photographs, etc. She was eloquent, quotable, and nothing she said was not interesting. I've known Melissa since she joined the company, so our experiences together spans more than 2 decades!

We have had wonderful luck in our interviews so far. We aren't quite to halfway through the interview process, but we certainly have a wealth of information with which we can start our outline process.

Then, of course, I had to come home and see Bingo. Well...at least the day started well!
Posted by Bev Sykes at 12:02 AM

Email ThisBlogThis!Share to TwitterShare to FacebookShare to Pinterest
Labels: theatre

I hope your days get better .

"Bingo" doesn't sound interesting to me. It ain't "The Gin Game."

But your "65: the Musical" has definite possibilities. And you have friends who could help a lot. If someone could do a musical about menopause, why not 65?