Walt completed the 5K walk for ALS in memory of his friend Bill Cunningham, who died several years ago. Thanks to last minute pledges he not only met, but exceeded his goal, so again, thank you to all who supported him!

He ran into Ellen and Shelly before the walk started, but got stopped at a stoplight, so didn't see them again, nor did he meet anyone else he knew, but he said he had a great time and I know he feels good about raising so much money for ALS research. Ellen and Shelly were walking with and for their friend Cathy Speck , who has lost many family members to ALS and who now suffers from the disease herself. (Her bio on the Davis Wiki is brief; I encourage you to read it).

They walked from Raley Field (the Sacramento minor league baseball team stadium) to the Capitol.

He said that they circled the capitol grounds, but kind of got overshadowed by a big Alzheimers rally that was going on. So many causes, so many opportunities to help!

When he returned home, we raced off to Stone Soup, a new take-out/catering restaurant which has been opened by two of our kids' friends, Sara "Sarge" Clanton and Myvanwy Morgan. Owning her own restaurant has long been a dream for Sarge, who has been working at a sandwich shop in San Francisco.

When we arrived, we were greeted by Marta's stepsister, Lindsey, who is the official events planner for the restaurant.

She was passing out drinks made from home made syrups and they were fabulous (not nearly as sweet as most carbonated fruit drinks you think of...I don't like those, but I loved these). We also tried samples of pulled pork, chicken salad sandwiches, potato salad, hoppin John, cold slaw, some sort of corn thing (I didn't get to that) and a couple of types of scones.

I think the restaurant is going to be a big success, if word about it gets out, and the women should be justifiably proud! 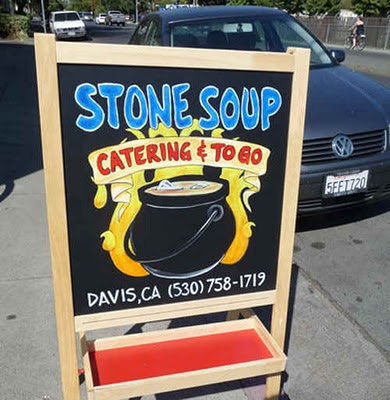 Yeah to Walt please tell him that the blogger world readers are proud of him and hope he is still in one piece after all that walking . LOL !!!Best wishes to the ladies at stone soup .

Congrats to Walt!!! And best wishes to your friends for success in their venture. Sounds like a great place for you to get dinner.