So often we "little people" think that the problems of the world are so overwhelming that how can we possibly make a difference. We aren't Oprah, we aren't Angelina Jolie, we aren't George Clooney. We don't have lots of money to spend on special projects in developing countries, we don't have influence with world leaders, or even the ability to travel to those countries to "do something."

Some of us are like Walt's sister's husband, who headed up a Rotary Club project in Kenya, bringing water to a village that didn't have a well before. Water is a hug deal in many countries around the world. I can't think of a single bio of a kid that I've read on Compssion's web site that doesn't include, as one of the child's tasks, "carrying water." Even the little guys. Some people walk five miles to a water source where they get water for cooking, bathing, cleaning, etc.. I am so proud of Joe and the Rotary Club for building this well. They have helped one village in one African country. There are thousands of villages in countries all over Africa that need wells. But Joe did something and it made a difference.

Today I saw a wonderful message from UNICEF, which says that in its most recent estimate on worldwide childhood mortality, compared to figures for 1990, in 2010, 12,000 fewer children under the age of 5 died each day than they did in 1990.

An annual report on child mortality found that in sub-Saharan Africa, the region with the highest number of under-5 deaths in the world, the speed at which the under-5 mortality rate is declining doubled from 1.2% a year during 1990-2000 to 2.4% a year during 2000-2010.

"The news that the rate of child mortality in Sub-Saharan Africa is declining twice as fast as it was a decade ago shows that we can make progress even in the poorest places, but we cannot for a moment forget the chilling fact of around 21,000 children dying every day from preventable causes," said Anthony Lake, UNICEF Executive Director. "Focusing greater investment on the most disadvantaged communities will help us save more children's lives, more quickly and more cost effectively."

The improved rate of childhood mortality is due in large part to the effort of the big groups which are working to solve the problem.

"Reductions in child mortality are linked to many factors, particularly increased access to health care services around the newborn period. As well as prevention and treatment of childhood illnesses, and improved nutrition, immunization coverage, and water and sanitation," said Dr Margaret Chan, WHO Director General. "This is proof that investing in children's health is money well spent, and a sign that we need to accelerate that investment through the coming years."

But I can't help but think that those of us who sit in our homes and sponsor kids or write checks to organizations that work with children, or give our pennies at Halloween to UNICEF have been a small part of that improvement.

The biggest factor in helping improve the lot of children around the world is care. Care which leads us to contribute money, write letters in support of big projects, and write letters of encouragement to children struggling in conditions we couldn't even begin to imagine.

At the time it seems like such a teeny little thing to do when the need is so great.

But if nobody cared, if nobody did anything, nothing would ever get done, and there would be no improvement whatsoever in child mortality rates. It's not up to the other guy, it's up to me.

So never discount the impact of a quarter dropped in a UNICEF box, or a Christmas box packed for a child somewhere in the world through Samaritan's Purse, or a contribution to Compassion, International's Rescue Babies and Mothers program. Save the Children says that as little as $1 a day can keep a child alive. Can keep a child alive.

You can keep a child alive for less than the cost of your Starbucks Coffee each day.

Don't ever think that you are too small to make a difference. To the children who benefit from whatever you do, you are a hero indeed, and even if they never know your name, or you never know what was done with your money, know that you made a difference. 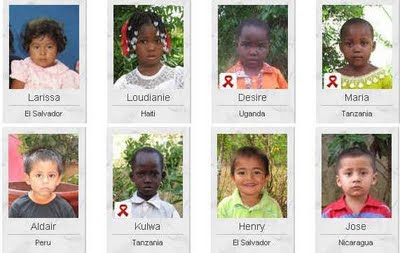 A handful of the more than 1700 children, age 3-18
currently awaiting sponsors through Compassion International
Posted by Bev Sykes at 12:02 AM