It's not quite as exciting as Friday the 13th, but what can you do? You go with what you have to work with. There was nothing spectacular about today, but I did do more than stay home watching criminal marathons, so this is how I spent my day:

The morning started with good e-mails. Nora's family confirmed that our flowers had been delivered, which I was happy to hear. And I had an e-mail from a very good friend in Annapolis, with whom I had lost contact. Last time we exchanged any mail was 2008. She says she's still technophobic so I told her about my exciting new hobby: snail mail! I told her if she gives me her address again, I'll send her a "real" letter.

I don't know what's happened to Bloodsource lately. I've been giving blood for nearly 50 years, and this was my 38th donation through Bloodsource. Until the last couple of years, things have always gone smoothly. I have a fine vein and I bleed quickly. But lately there are new people there each time I try to donate and something always goes wrong. A year ago, they sprayed blood all over me and had to give me a free t-shirt as an apology. The last time I donated, she prodded several times before hitting the vein. This time was the first time it actually hurt as she dug around trying to get the vein to start spilling blood. Once she finally hit it, things went fine, but I'm getting to the point where I may be reluctant to donate again.

10:30: Finished at Bloodsource, stuffed with Nutter Butter Peanutbutter Cookies and in the car on my way to Borders. It is the "last 9 days" for our local Borders and everything is 60-80% off. 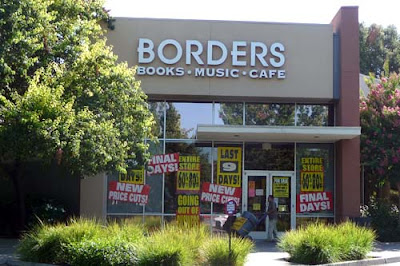 I can't remember how long Borders has been here, but I remember well the great controversy when it was proposed. It was going to kill the local small book stores. And, in fact, three did close and one moved to nearby Woodland. However, The Avid Reader, the bookstore which stood to lose the most, has outlasted the Big Box Book Store and a couple of new used book stores have opened up and seem to be doing well.

The sale was too good. I bought lots but didn't spend much, which was the best part. The first thing I spied was a postcard rack and these days I send a lot of postcards, so I loaded up.

There are forty cards here, of Davis and of other sites around California. These cards generally cost about 75 cents each, but I got them for 15 cents each. I'm so delighted, I might actually go back for more.

I bought something for the new baby, soft socks for me to wear around the house, a book for one of the Compassion kids (on how to draw automobiles), my desk calendar for next year, for which I usually pay about $20 and which was only $2.80 today, and a few books for me. Total was less than $50. Very good deal indeed.

11:30: Home to get the iPod and cell phone I'd left behind and to visit the facilities and then got on the freeway again. I'm listening to Jaycee Dugard's book about her abduction by Phillip Garrido. It's not a pretty book, but I'm listening. What shines brilliantly throughout is (a) her love for and longing for her mother, (b) her loneliness, (c) her love for her children (the youngest was born when Jaycee was 13), (d) her love of animals, and (e) her determination to make the best of herself that she can, and hope that someday she can be the boss of herself. It is so poignant in spots that I wanted to take her in my arms and tell her that nobody will ever hurt her again. I watched the TV interview recently on the computer yesterday but the last part, the part where Diane Sawyer asks the parole board and the police who visited the Garrido compound how they could have failed to check the whole area and even how they never questioned who that young woman in the house was. Inexcusable!

Noon: Arrive at the care center where Kathy is. She was sitting up in bed and eating her lunch. Seems better than when I saw her a couple of days ago. Peach was supposed to come with me, but had to do something else. Kathy seemed pleased that I came anyway. We actually chatted for a little over half an hour, but she began to struggle for breath and I could see she was tiring, so I left. But I felt it was the best visit I've had since she was admitted. I don't now how much longer she can go on struggling for breath, but she's a fighter. I can tell she has some of her old spunk back because she's angry with one of the aids, and she already concerned with how much this all costs. She has handled family finances--and other people's finance for so long, she just can't let go of it.

1 p.m.: Stopped at McDonald's for lunch and then Jaycee and I got back on the freeway to come home again. I thought about going back to Borders for more postcards, but after a serious discussion with my bladder, and given that the Borders restrooms are now closed, I decided not to--but those postcards are just too tempting and I may go down there tomorrow. I somehow don't think there is going to be a big rush on Davis postcards!

Rest of the day: At home at the computer doing several things. Check the left column here for a button to take you to the page to sponsor, if you so desire, Walt in his very first fundraising walk ever. His work buddy Bill Cunningham died of ALS several years ago and when someone who had signed up to do the walk, and then could not asked if Walt would stand in for him, Walt readily agreed. Walt will be walking as Carlos-Lion Carvajal.

Our order from Omaha steaks arrived and we will be eating stuffed filet of sole this evening.

All things considered, not such a bad day.
Posted by Bev Sykes at 12:02 AM