We watched what I think is a made-for-Discovery Channel video tonight called China's Mega Dam. I'm not sure exactly when it was made, but it talks about the 3 Gorges Dam "scheduled for completion in 2009," so I guess it was made before 2009!

It was a fascinating, impressive and at times depressing look at the area where we will be in a little more than a week. I didn't much like the references to what would happen if a major earthquake hit, since the dam is built either on or near an earthquake fault and this ol' planet of ours doesn't seem to be very stable at the moment. We are taking a seismologist (Mike) to a fault zone and I'm hoping the twain do not, in this instance, meet!

The movie also shows me that, whether I've been working on it or not, I am slowly absorbing information about China. This pulls together the novel I read ("Dragon Bones") and the movie we saw a week or so ago, Up the Yangtze, which told the story of a family living along the river in an area that was scheduled to be flooded.

The book deals, in addition to a few murder mysteries, with archaeological excavation, trying to retrieve as many artifacts from ancient cultures as possible before they were gone forever. In China's Mega Dam the film crew visited one of those archeological digs and showed the wealth of artifacts from the ancient "Ba" people, a group of people living in the eastern Sichuan province, as well as peoples even older than the Ba that were being recovered. It also showed the heartbreaking sight of the river washing over the sites of the digs, knowing that all that remained of those civilizations is now gone forever.

When I first went to college, I thought I would like to be an anthropologist. That plan lasted about as long as it took me to read the course descriptions, but I still have an interest in ancient civilizations and appreciate the work that others have done in preserving their history. The loss of the artifacts along the Yangtze must be such a heartbreaking thing for those dedicated to preserving China's heritage.

Then there were the villages the movie profiled. One woman was living in her house that had been in the family for generations. I believe she said for 12 generations back from her grandmother. Hundreds of years. She still cooked in the wok that had been used for generations. In the village there was a tree that had stood there for more than 100 years. All of that is now under water and the family relocated to a concrete apartment building, where she has traded hundreds of years of family history for running water. The sight of her returning to her now deserted village and lighting incense to Buddha and praying for a miracle that would save her home was heartbreaking.

The movie explained the importance of ancestors for the Chinese and how terrible it was to lose the graves of the ancestors of all of the thousands of people who had to be relocated to higher ground.

But it also showed the resilience of the Chinese people, who smiled and shrugged and said that they always managed to cope with whatever came along.

A friend of mine, who is Chinese, told me two things about my upcoming trip -- one was that it will be hot and that I should take lots of handkerchiefs (swell--"heat" is the thing I hate most about traveling!) and the other was that I was in for a huge culture shock.

And speaking of culture shock that has nothing to do with China, Char brought up a point about the royal wedding that had not occurred to me and which, when I reposted to Facebook has sparked an interesting discussion.

Char asks: "there is a huge question no one is asking. WHERE ARE THE PORTA POTTIES??? They may be hidden, but they have to be there. Also some of those folks had to be inside the church 2 hours early. Some of them were quite old. Did they let them find a bathroom. How does the queen manage. She is old, but must have a concrete bladder."

I posted this question on Facebook and got some interesting responses:

Sue says "they (the portopotties) were disguised as guards.

Marte says, "You only thought those were trees." and adds, re the queen, "what do you think she carries in her handbag? Depends!"

Robin adds, "I did see a lot of people in the fountains" and then adds "also, please note the queen did wear yellow."

Marte comes back in with "Where does the queen pee? Anywhere she wants to!"

Sally, getting logical about it all, says "Anderson Cooper was commenting on his show tonight about how many people he saw urinating and/or intoxicated in public on the streets at night in London."

Robin chimes in again: "the Queen always has that pained expression on her face...I also saw that same look on Princess Anne...and I wont even mention Fergie's daughters...their outfits made me want to go to the bathroom!" ... later she posts "Well that hat that Princess Beatrice was wearing did look like a twisted colon..." 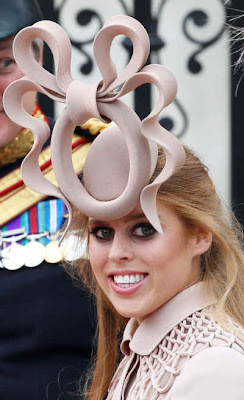 So if you were one of the 20,000 people at Trafalgar square or the million around Buckingham Palace, please do leave a message and let us know how you and your bladder coped. Thanks!
Posted by Bev Sykes at 12:02 AM

Over the past fifty years or so, I've heard people remark again and again that "the Queen has an iron bladder." She must have been trained for her role long before her father died.

That hat -- I noticed it on the news last night -- is a monstrosity. As it happens, I like stylish hats, but I saw a lot that -- eww!

I'm just getting caught up after being away for a week. I managed to miss THAT hat - for which I am grateful.

But, re the 3-gorges dam. That was mentioned more than once on our trip to Cambodia & Vietnam on the Mekong River. Seems likely that the dams China is building upstream will (or at least has the potential to) significantly alter the flow/volume of the water in the Mekong. It's a huge understatement to say this would have a huge impact on the people who live along the Mekong and rely totally on it for their existence. It'll be interesting to hear what you find out about it.

Interesting to hear that abut the Mekong. This was never even hinted at in the video.