I have written here extensively of my frustration with my mother for refusing medical care. She talks about waking up in the middle of the night in excruciating pain from muscle cramps or when she can't move her arms, or when her heart is racing, or something else, but she won't call the doctor to ask for advice because she's afraid they'll ask her to come in for an appointment and she hates to go to the doctor. (She also hates to take pills and gets angry because she considers it a weakness to need them.)

When she gets to the doctor's office, she apologies for bothering her, minimizes her complaints and forgets to tell the whole story "because it's not really that bad," she tells me later. There are times when I've been driven to distraction by her actions.

There are differences between myself and my mother. For one thing I worked in medical offices for about 20 years so I have no fear of that world.

For another, I don't tell people when there is something wrong with me that I am trying to ignore.

So it's a big deal for me to confess here that I have had this "condition" (which I will not describe) for about three months now. Sometimes it's better, sometimes it's worse, but I am almost always aware of it. I have my own method of dealing with it and it usually clears up, but this time it's been worse, and less worse, never "better."

I have not talked with anybody about it. I haven't even mentioned it at Cousins Day. I've just been being...well...my mother and determined to deal with it myself rather than go to the doctor's office.

Last night it woke me up and I was up in agony for about 3 hours until I was finally able to deal with it. I made the decision that this was the last straw. I went to the computer, called the Kaiser web site up and made an appointment.

I didn't even tell Walt I was going to the doctor, nor has he had a clue that there has been anything wrong with me.

Turns out it was a good thing I went. This is not life threatening, it's just "quality of life" threatening -- and it has definitely been threatening the quality of my life for a very long time.

Apparently almost everything I've been doing to fix the problem has possibly been making it worse.

So I am now loaded down not only with a course of medication that should fix me up in about a week, but I also have a second course in case things happen in China. A week. She said a week. HOW long have I been suffering with this???

I don't think I'll admit to my mother what I've been doing all the while I've been scolding her for refusing to call the doctor when she's not feeling well!!!

But I did learn about health care at my mother's knee, and apparently she taught me very well.

Do you ever use Google earth? I've had it forever, but I've been using it more since I got into this "write to people around the world" jazz. I check out their addresses on Google Earth. If I'm really lucky there is a little camera to click on that will take me to a street view of that address, or close to it. It has made all of these anonymous encounters a bit more real.

Well, today, I decided to check out Valley Springs on Google Earth and not only was I able to see the town, but I followed the road that we took out and got a great satellite shot of the farm and when I clicked on the little camera, discovered that the camera was situated directly in front of the road to where the farmhouse had been. I even discovered the address: 1874 Paloma Rd. (of course they had no road names when my mother lived there). What fun. 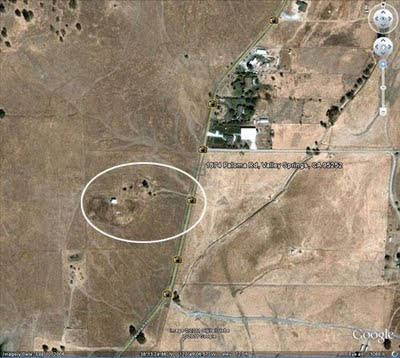