It's fair to say that I, along with more than half of the voters in the country, felt like shit last night.  We simply have to get rid of that damn electoral college.  This is the second time they have screwed the country!!

However, rather than sitting at home and moping, or crying (which I did last night), I had a WONDERFUL time! And I didn't think about DT once.
Kimberly L. is a blogger whose blog I read many years ago (until she took it down).  We are Facebook friends, so we have been acquainted for many years, but have never met.  She and her husband Peter are in San Francisco on vacation and I offered to give them my "grand tour" today.  What great fun!

The nice thing about internet friends is that when you meet, it's like meeting an old friend you just haven't seen in awhile.  You instantly relax into a conversation without having to explain a lot of stuff.  They were staying at a hotel on Fisherman's Wharf.  That it took forever to get there because of traffic delays was an omen for how the day was going to go.

We started the tour by going down Lombard Street, which they had seen, but had not walked down.  Then we went through the financial district to Market Street and up to Twin Peaks.

Peter is a serious photographer with serious equipment and Kimberly and I chatted while he took pictures of San Francisco.

I had to excuse myself because my bladder was full and Twin Peaks just happens to have a fancy-schmancy toilet...which is even free to us  I loved the instructions posted outside though I did wonder how many people actually use the thing for twenty minutes at a time!  But maybe I don't want to know...
..

Peter's photos having been taken and my bladder blissfully emptied, we were ready to continue the tour, through Golden Gate Park, It was a beautiful day to be in the park and my City put on its best bib and tucker.  And both Kimberly and Peter agree with me that the de Young museum is one of the ugliest buildings we have seen.

From the park we went back into town and past the Palace of the Legion of Honor with its statue of "The Thinker" in the courtyard. I took them through Sea Cliff and past Robin Williams' home, then through the Presidio down to Fort Point where you can look up at the Golden Gate Bridge and see where Kim Novak was supposedly trying to commit suicide in Alfred Hitchcock's Vertigo.

Then we wended our way down Divisidero Street, into the Castro District and from there out to 29th and San Jose, to Mitchell's Ice Cream store.  It is apparently in somebody's best of the best ice cream places in the country and Peter has been trying to visit as many as he can. Having a look at the link for this place is worthwhile.  They have an extensive menu of exotic flavors.

I had two scoops -- Ube and Buko.  The former is made from purple yams and the latter from "baby coconut."  It was not only delicious, but colorful too!

It was time to head back to the hotel so I could get on the road before rush hour, but I had one more thing to show them, the steepest hill in San Francisco, a 17.5⁰ angle, which is pretty darn steep.

I dropped Peter and Kimberly off at their hotel and was happy that I only hit mild rush hour traffic crossing the Golden Gate bridge, but shortly after I crossed, I had a call from Kim asking if Peter had left his cell phone in the back seat of the car.  I pulled off at the next offramp, and yes he had, so I turned around and headed back into the city, which meant that my timing was for naught.  I gave them the phone and got back on the road again, this time in the traffic, which was horrible.  Thank god for ebooks because we were creeping along at a whopping 2 miles an hour forEVer.  Highway 37, which connects Hwy 101, through Marin County, and I-80, which takes you to Davis takes just about half an hour to drive.  Tonight it took an hour to get HALF WAY.  It began to lighten up enough that I could get up to 50 mph in spots, but it was now dark, it's a relatively narrow road and as I said recently, I am hating driving at night because I get kind of disoriented.  So I was traveling a safe speed until we were ending that part of the road and I was trying to decide if I was going to go right to I-80 or take a side road that I like to take in the daytime.

The decision was made for me by a guy behind me honking his horn and flashing his lights.  I got scared and took the offramp.  Only it was the offramp.  Not only that, but there didn't seem to be a way to get back to where I was.  This was a long road that was two lanes, but only one direction and no sign of a turn around anywhere.
I didn't know where the hell I was and it was so dark I couldn't see anything.  I crossed a bridge I didn't know existed.  I don't know if I was on Mare Island or in Vallejo or both.  I was looking for any sign that would tell me in which direction I should drive to find I-80.  I was lost in Vallejo for HALF AN HOUR!!!!  At one point I pulled over to get out our GPS, which was not in the glove compartment, where it always is.  I finally had driven so far that I was getting out of businesses, so I pulled over and turned around and drove back from where I had come and then farther.  I could see cars on an overpass, which was a promising sign.

And it was. I had found the way home again, after driving with all those big trucks the rest of the way, hugging the slow lane.

By the time I got home (9:00) I had been driving longer than if I had driven to Santa Barbara, given that I left at 9 a.m.  (It takes 8 hours for me to drive to Santa Barbara).  But I had a wonderful time, except for the getting lost part.  And it was so much fun to add Kimberly to the list of internet friends that I have met in person. 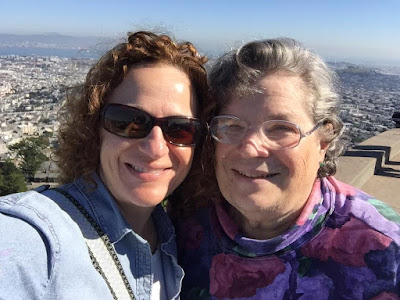