Isn't that cute?  Little Tom Burmester has written a play that is going to be performed at the university next weekend.  I was going to interview him about it. I remember Tom and all his family (especially his father, who was a HUGE influence on our kids, since he was not only their English teacher, but also the founder of Acme Theater Company, still going strong more than 30 years later).  We used to go to church suppers with Tom and his family.

So now little Tom has written a play.

Only before I went to interview him about this play, I did some research and found out that "little Tom," who must be pushing 50, since I think he is our Tom's age, is now a big name in Los Angeles theater.  The play that will be presented next week is the third in what will ultimately be a four-play war cycle.  These were some comments by critics that I found in researching it.

CRITICS’ CHOICE - Los Angeles Times: "This “Gospel” is chapter and verse of one of the finest war plays in recent memory."

GO! - LA Weekly: "Electrifying! Yes, it's another war play, but the first act moves so swiftly and the themes are presented so seamlessly, you find yourself gasping rather than groaning."

FEATURED - LA Stage Watch (Don Shirley): "The War Cycle is one of the most impressive multi-play bodies of work to emerge from LA’s 99-seat theaters."

The War Cycle brings a face to the war.  We talked about the difference between the Viet Nam war, where correspondents went into battle with the troops and we saw the battles every night on television.  It became part of the war protests and eventually brought about the end of the war.
But how often do you see actual battles in the middle east and not just endlessly repeated scenes of selected moments? How often are we asked to do our part for the war effort? (I seem to remember early on we were told that the best way we could help was to continue life as normal, to go shopping, etc.)  How many persoal stories do we see of soldiers and families affected?  We see some, but not often enough to raise ire among the general population.  And so the war rages on and we concern ourselves with shopping and tweeting and web surfing.
Tom wants to change that.  From another review

The action, set in 2009, transpires primarily in a small U.S. Army outpost at the mouth of Afghanistan’s notorious Korengal Valley, also known as the Valley of Death.  There, a squad of battle-hardened soldiers awaits imminent redeployment back to the States.  But when a fanatically religious ideologue is assigned to their squad, divisive factions form. During their last hours before returning home, the soldiers are sent on a risky final mission in which the cracks in their ranks widen to deadly chasms.

It sounds like it's going to be a powerful play and I'm anxious to see it.

My plan had been to talk with Tom and and his director-wife Danika for half an hour and then get over to Atria for lunch and take my mother to her hair appointment.  As it turned out, the interview was so interesting that I was there for over an hour and I figured it was too late for lunch, so I would just wait in the apartment until she got back.

Well...no.  She was on the couch when I got there and said, as she usually does, that she feels terrible. She feels terrible all over, but can't say specifically what feels terrible (except her leg, which still causes her so much pain she can barely walk).  I'm beginning to think that the "feeling terrible" is more an emotional thing than a physical thing because the more "awake" she gets (from chatting), the more normal she seems.  This is one of the unintended perks of having her on assisted living.  She gets contact at least four times a day from Atria staff and each contact is a social interaction, which she enjoys.

We had a nearly an hour before her appointment, so I got her some coffee and a couple of oatmeal cookies, just to get something into her system.  Atria used to have a table avalable to everyone where you could get coffee, milk, fruit and treats all day long  Then they got rid of it and moved the coffee off to one side and then you could get coffee (regular or decaf), tea and a goodie.  The goodies have been gone for a year or more.  When I went to get regular coffee, there was none, so I went into the dining room and there was coffee, but no cups and an empty goodie container, so I went back to the front and got decaf, figuring it was better than anything.

I hate it that so much has been spent on turning Atria into a Holiday Inn while the rents go up and the quality of service declines.  Oh the staff are wonderful, but the little touches that made me fall in love with the place in the beginning--like the comfy couches inviting conversation, and the goody table and the puzzles in the middle of everything where you could meet other people (now shoved into a corner on the second floor, where nobody passes by) are all gone. The place now looks perfect for a brochure, but those "plush" couches and chairs are hard to sit in and do not invite conversation at all.  You don't see nearly as many people sitting and chatting in the front any more -- I suppose it was too depressing to see, you know, old people in the front of the building.  So depressing, dontcha know.  Even the hair salon was moved upstairs and cut in half, size-wise and it, too, is no longer a comfortable place to chat with your neighbors while waiting for your turn.  If my mother wasn't so settled and happy, I'd look for someplace else, but she likes Atria and it's so close to my house that it's convenient for me too.

Anyway, over an hour of chatting and coffee she eventually seemed not to feel "terrible" any more, but it killed her to stand up and walk, but we did it very slowly, stopping twice for her to rest on the way to the elevator. 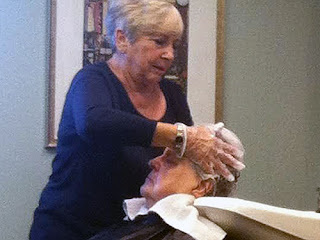 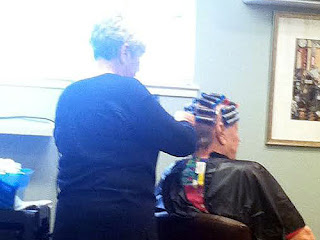 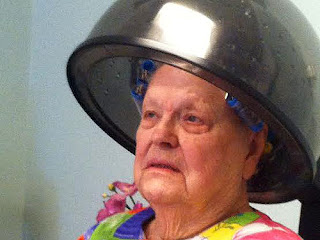 And when she was all finished, the change from before was amazing. 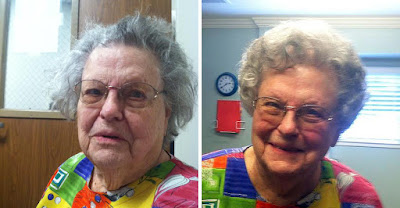 Once I saw her in her chair, reading the newspaper, I left to go shopping.  We had made it through the week.  She'd been x-rayed, poked and prodded, medicated, and zapped.  She'd had a trip to the ER, a mental health exam and a hair do and we were finished.  I'd met with the folks from Atria a couple of times, her dentist once, and the insurance guy.  I got her outstanding bill paid and now just need to send paper work to her insurance company to get the process started for long term care reimbursement.

Walt is gone and my Saturday is blank.  I may lock the front door and stay in my pajamas all day.
Posted by Bev Sykes at 8:48 AM

Email ThisBlogThis!Share to TwitterShare to FacebookShare to Pinterest
Labels: My Mother, Tom Burmester

So interesting to read your comments about the decline of Atria. I've been here at The Terrace just a week under one year. And the decline in food quality, permanent staff/service/etc. is distressing. Granted, there's been a lot of turnover in management (new owners, new management company, new director, new marketing, etc.) and it takes time for things to settle out. But although I don't have need to use it, I've heard tales about the turnover and decline in the nursing staff. And since this is primarily an assisted living facility, that's even more distressing. My next-door neighbors added on to their apartment at their own expense (not recoverable) and are even thinking about moving. And some are calling an ombudsman. Those of us in independent living have the option of getting out-and-about, but most of the other folks don't have that option. Plus I'm already paying for three meals a day, but am eating out or at home more and more often. It'll be interesting to see if my monthly fee goes up at the end of my year. And now it sounds like it's industry-wide, not just here.

Atria, too, has gone through several directors. The one now is retired Air Force and runs the place like military. He's the one who has been there the longest. The rent goes up every January; last year it went so high there was a revolt and they ended up lowering it (but not to what it was before)