Well, the axe fell yesterday.  The e-mail came before I left for Logos:


Peter and I will be giving up our ownership of Logos Books when our lease expires, at the end of January 2017.  At this time we are looking for someone interested in continuing Logos as a used books store serving the Davis community.  As you can all imagine, this has been a difficult decision.  However, we feel that it is the right one for a variety of circumstances – not least of which may be our creaking backs from hauling around books!

So you only have five more months of "Today at Logos" to get through.  I don't know what the future of the book store is, if they will find someone to take it over, if it will continue to raise money for charity (>$20,000 so far for Doctors without Borders and Save the Children), but when Susan and Peter quit, I will too.  As Susan said to me recently, "You'll probably be glad to have your Thursdays back."  And...yeah...I will. I still enjoy my time there and the "regulars," as well as meeting old friends I haven't seen in years, but I will be glad to have my Thursdays back. This volunteering jazz cuts into my pocket letter making time!

So I arrived and it was the guy who always moves the cash register was working.  I don't know why he does that.  First thing I have to do is rearrange the whole desk.  He moves the cash register, he moves the credit card machine, and everything is just "off." It must take me three whole minutes to rearrange the desk after he leaves.
I talked with him bout the ending of Logos and he kept asking me all these questions about what Susan and Peter are going to do and I kept telling him all I knew was what was in the e-mail.  He finally left.

The first customer was looking for a book by Peter Egen, who apparently writes book about bicycles and motorcycles, but then writes essays too.  I directed him to the travel and the adventure sections, but no luck.

A black woman with a hijab looked through bargain books and then wandered around the store.  She didn't buy anything, but turned and gave me a big smile when she left.
An old couple came in.  He was tall, but stooped over his walker.  He had jowls that hung like a bloodhound and a baseball cap from the Davis Farmers Market. His mouth was making strange movements as if he were moving false teeth around inside his lips. I don't think they bought anything.

A Richard Dreyfus-type with an Acubra-type hat came in and bought a bargain book.  He asked "where's the cute little girl" (Sandy's granddaughter), with whom he seemed quite taken.

A middle aged man bought a Sherlock Holmes which cost $4.88 and but only had $4.78, so I told him I was easy and he could just pay that.

A couple came in and after looking around for awhile, they bought a book of contemporary fiction and a book about Richard Feynman.  I assumed one book was for her and one was for him.

A chatty woman wearing a shirt with Grumpy and "God bless and have a wonderful day...somewhere else" on it.  She bought six bargain books and two humor books including one called "Why Dogs Eat Poop."  She said she was "almost 70" and had a juicy tale to tell about a friend whose husband ("a scrawny thing") was cheating on her.

A kid came in with a violin bow.  I told him he's lost his violin and apparently he was on his way to a violin lesson and didn't have his own violin.  His mother had a helper dog...don't know if it was for her or in training, since she didn't seem to need the kind of harness-for-the-blind that the dog was wearing.  But I didn't try to pet him because I figured he was working.

The kid was reading a graphic novel of Dr. Who when he had to leave for his lesson.  He said he would be back after his lesson to buy it, but never returned.

A tall guy bought a book of poetry.

The son of our kids' music teacher came in again--he does frequently--and said he was "just doing my usual round."  He didn't find anything interesting today.

A guy wearing a shirt with a picture of Mt. Kilimanjaro on the front and "if you can't drink it, climb it" on the back bought a contemporary fiction and a book of short stories.

A woman came in looking for a women with a red and black striped coat.  Thanks to these notes, I know for sure that she had not been in Logos.

Bruce browsed the bargain books, but didn't choose any.  He came in and looked through the history section for a while and didn't buy anything, but told me goodbye when he left.  I finally was able to get a photo of him (from the back) to give you and idea of the outfit he wears all the time.  You can see the hat on his head.  It has a blue brim and, yes, he made it himself. 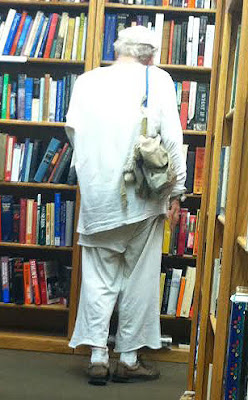 At 5:30 p.m., the runners passed by.  I don't know where they start but they jog past the store every day, Susan says.

A woman was looking through a shelf of books and pulled one book out and put it back again.  It was perfect for Phil, so after she left, I bought it for Phil for Christmas.

Walt picked me up and we came home, where I cooked a Blue Angel meal (quesadillas tonight) for dinner.
Posted by Bev Sykes at 10:14 AM