Well, today may have been one of the most depressing days I've spent in a very long time.  I contacted Susan last night from the ER and told her I couldn't work today.  She understood.  I went to Atria to spend a few hours just to observe my mother and see how she was after the emergency room trip last night (of which she has no memory).

I knew it was not going to be a fun day when I walked in and asked how she was. She had her head down and said "not good."  I asked what hurt and she said her headache, her stomach was upset and her right leg was hurting a lot. She asked if there wasn't something I could do.

Sadly, and bad me, this led to about a half an hour discussion about how I had taken her to the doctor (which she does not remember) and she told the doctor she had no pain.  I told her that the doctor can't help her if she doesn't let her know what hurts.  She got defensive and decided that she just would never say anything about her pain again, since she doesn't know what to do and how to do it.  She could not get comfortable in any position.

I actually took a video of her describing her pain so that if she tells a doctor she is not in pain, I can show what she was talking about.

An Atria worker came in to check on her and my mother perked up and didn't mention her pain, then sank back down into her pain again after the worker left.

I had gotten there at 11 so at 12, I asked if she felt like going to lunch, which she agreed to do.  As luck would have it, they were celebrating September birthdays and she agreed to sit at the birthday table, though didn't talk to anyone  I did not have my camera with me.  One of the guys at the table will celebrate his 100th birthday next week.  I'm wondering if maybe she was miffed because someone is older than she is and she seems to want to think nobody can possibly be as old as she is.
But lunch was uncharacteristically good and they brought out a HUGE birthday cake and all the staff sang to the birthday people.  My mother never cracked a smile.

I was going to pass on the cake in preference for peach pie, the alternate choice, but, as an old cake decorator, I was curious about both the cake and the mountain of frosting on it.  I decided to have a piece, fully expecting to find the frosting cloyingly sweet, but instead it was stabilized whipped cream and absolutely delicious.  So I ate the whole thing, which I regretted about 4-5 hours later when I had the sensation of being uncomfortably full!

We went back to the apartment (she is never sure how to get there).  She tried to get comfortable for awhile and I finally suggested she take a nap, which she did...so I did too.

(isn't it amazing that I can take selfies in my sleep?)

She slept for about an hour and woke when Jeri called.  Jeri is usually a bright spot in her day, but she seemed almost irritated that Jeri kept talking to her.

After we finished the conversation, she was very restless, saying over and over again that she doesn't know where she is supposed to go or what she's supposed to do.  This is not a new thing.  She has said that every single day since she moved to Atria.  She knows she has to do something but she is so afraid of doing it wrong...and can't figure out what it is in the first place.

I reminded her that I had brought her clean laundry and that it was on her bed waiting to be folded, so she got up and did that (to my surprise; usually when I suggest some simple task she can do, she refuses to do it).  But then she came back and it started all over again -- where was she supposed to go and what was she supposed to do?

I tried telling her that the doctor told her she was supposed to rest today, but she wasn't buying that.  She would just sit there, head in her hands, the picture of misery because she can't figure out what she is supposed to be doing -- and the leg pain was just making it worse.

She would get up, walk into the bedroom, turn around and walk back out again and into the kitchen, then back to the couch to ask where she should go and what should she do.  Then she'd repeat the trip again.

I cannot tell you how much it pains me to know that this seems to be her life now.  Agony over not knowing what to do and unwilling to do anything suggested she do, even something as simple as moving the newspapers, which are bothering her because they are "clutter" and putting them in a stack so the housekeeper can throw them out. I cannot tell how many times I have suggested that "something to do" to her, but she never does it.

I finally came home, hating to leave her but there was nothing I could do to help her.  I did come home, though, and wrote to her doctor.  I can't believe there is NOTHING but Tylenol to relieve her pain.  This is what I wrote:

I'm sorry to keep bothering you. I spent 5 hours with my mother today and she is in agony over her leg pain. She says it starts in her right hip and goes down the front of her leg to about mid-calf. This is no attention-seeking, she even cries out in her sleep. Today only one leg was involved, the other seemed OK. But she could not sit or lie comfortably anywhere. She walks very slowly, and with a limp.

She had a bout of sciatica many years ago. I'm wondering if this might be the problem. I'm also wondering if referral to an orthopedist might be in order. I am so frustrated because Tylenol does not help and it is so frustrating to see her in such pain and be able to do NOTHING to help her.

I read up on sciatica and it is described on one page I found (which, of course, I cannot find again) as pain originating in the hip and going down usually just one leg to about mid-calf.  That is EXACTLY the pain she is describing.  I hope Dr. A will give us a referral to an orthopedist because it is clear that she herself has nothing to offer my mother, but that doesn't relieve her pain at all.

I just hate to think that this is her life from now until it is over. 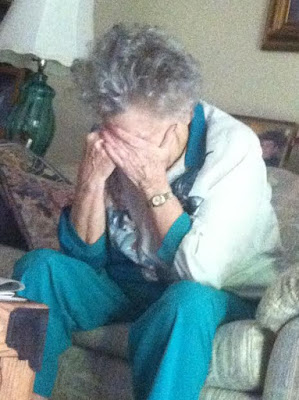 My heart aches for both of you.