Beth Ruyak, host of Capital Public Radio's program, "Insight" since 2012, has worked as a reporter, anchor, producer, and writer.  She hosted daytime television, magazine shows, special events and live coverage.  Among the highlights of her career: sideline reporting from 5 Olympic Games and Super Bowl XXV, traversing Europe for 3 Tour de France bicycle races (becoming the first woman television journalist to cover the event), co-hosting "The Home Show," and guest co-hosting "Good Morning America." Her news, sports and health reporting have earned Emmy awards and opportunities to interview, learn from and tell stories about people all over the world.

And Beth Ruyak wanted to interview me.

Well, technically speaking my colleague Jeff Hudson, who has his own show on Cap Public Radio, had suggested Beth might do a segment about the new season of Music Circus with both himself and me as the interviewees.

But it sounds better to say that Beth Ruyak wanted to interview me.

Jeff picked me up at 8 a.m. and we drove in to Sacramento, where we sat in the green room awaiting our turn to be interviewed.  I was calm, cool, collected.  We were going to discuss something I knew something about.  No need to be nervous.

But the longer we waited--and we had about 45 minutes to wait--the more butterflies began to open their wings in my abdomen.  Beth came in and introduced herself to me (she knew Jeff, of course)
Stacey Powell, the author of the book "The Finance Gym Action Plan for a Better Life with Money: Don’t just know better. Do better" came in.  She was on the segment before ours, talking about a touring program she is doing to publicize her newly-printed book.  She was a very nice lady.
Talking with her helped corral the butterflies, though they threatened to flutter about again after she was called for her segment.

I signed the guest book.  I looked back on all the other signatures over the months and tried to be clever.  I just wrote "Omigod, you guys" and signed my name.  Cryptic, but to the point, and on topic!
Eventually they led us to the interview room and sat us close to our big microphones.  Beth had said she would hand me the first question, which was about whether I go to Music Circus much.  Easy--every show for the past 16 years (when I started getting critic tickets; before that it was too expensive!)

She played some sound clips Jeff had made last night, including the ubiquitous "Omigod, you guys".  She asked me something and I gave her an answer she didn't expect -- telling her about a member of the original cast coming out of retirement for one last production.  She was quite surprised when I told her it was Chico, the Chihuahua.

(If you'd like to see an interview with Chico and his handler--and it's worth it--you can check it out here.

I don't remember what else we talked about, but if you're interested, you can hear the interview here.  The time flew by, even for Beth, who said she never went over time, but was shocked to realize that our time was up. 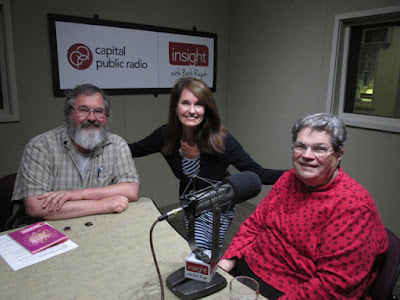 After the show, she said she liked the camaraderie Jeff and I had together and would like to do another spot with us, when something comes up to discuss.  It would be fun to do it again.
Jeff drove me home by way of his house, where he got a bag of Satsuma plums from his back yard for me.  They are delicious and that was my lunch today!

Jeri and I were supposed to do a FaceTime with my mother, but the time got mixed up and in the end, we decided to reschedule for next week.  I have to face the fact that my mother no longer has "bad memory days."  Bad memory is every day.  For once, I had something "exciting" to tell her.  I told her about my interview and she seemed to be following, but when I mentioned that the weather was cold when we left the radio station, she said "what were you doing at a radio station."  When I said I was there for an interview and she asked why I hadn't told her anything about it.  Sigh.
Posted by Bev Sykes at 12:00 AM

Email ThisBlogThis!Share to TwitterShare to FacebookShare to Pinterest
Labels: My Mother, radio

John said after his dad got to the point where he didn't remember anything, it was easier on him (John) - and maybe his dad, too. John's stomach didn't get into knots when he visited, not knowing which dad was going to be there. John at least knew what to expect when he got there. Not much comfort, I know, but maybe your stomach will appreciate it. Hugs!