Martha was beloved by so many people and once again we all gathered in a church to remember our friend, who, while she didn't die too soon (at 92), certainly has left a hole in the Davis community.

Once again, this was a chance to see "the usual suspects," people we haven't seen since...well, since the last one of these events...and these events are coming too fast these days, with no indication that they are going to stop anytime soon (after the formal part of today was finished, we learned that another guy we know had died Friday.  I hadn't seen him in a few years and had no idea he was as sick as he was).

Despite not wanting a memorial service, I think Martha might have liked this event.  Her children spoke, and two of her fellow performers spoke.  They ran two videos of her singing, which left us all teary-eyed.  Low key and lovely event, with grey skies and rain outside, depicting how we were all feeling at having to say goodbye to another friend.

Ironically, one of the 3 shows I reviewed this weekend was called "Shadow Box," the story of three dying people living in a Hospice-like facility, each in his or her own cottage, waiting for death.

Joe is joined by his wife and son.  The son doesn't know his father is dying and his wife is in such profound denial that she won't enter the cottage because then she would have to acknowledge that this is the end.
Brian lives with his lover Mark, who is his caregiver.  Brian's former wife shows up, all glitz and glam and full of laughs and happy memories.  Mark feels marginalized until the wife sees tangible proof of Brian's disease and Mark gives her a no holds barred picture of the life of a caregiver.

Felicity is in a wheelchair, having had several operations and finally declared terminal.  She has dementia and her daughter is her caregiver.  She goes in and out of reality and some of her conversations with her daughter are entirely too familiar.

It's a powerful and moving play, but it gets us to think about life, to think about what is important in life and to live life to the fullest, as Martha did. 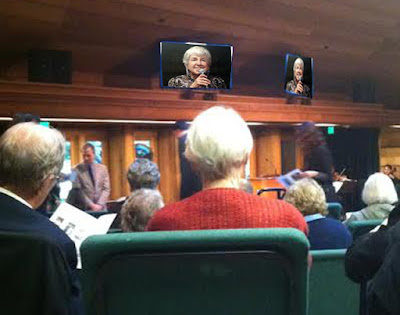 just lost two good friends and one was only 40 yrs old and she had cervical cancer and so sad she is gone . But I think 40 is way too young to die .