The Problem with My Mother

We haven't seen much of Mrs. Reagan in recent years, but photos of her like the one at the right are how I will think of her at the end of her life.  She seemed very frail, there are bruises on her legs, when she walked she was bent over, walked slowly and leaned heavily on the arm of the person walking with her.
But then that was not expected.  All things considered, she was doing well for a woman of 92.

Recently I found a video on Facebook that I can't find again, but it was an old woman, bedridden, but smiling at the camera and, in a quavery voice, singing one of her favorite old songs.  The person who posted the video wanted to show everyone how much fun her 90 year old mother was having singing one of her favorite old songs. Not only was she frail, bedridden and with a quavery voice, but her face looked something like this.

She was toothless and she had way more wrinkles than this woman does.  She was 90 and doing well.  And the video made me smile because she was so happy to be singing her song.

I told my mother that her problem is that she looks and acts so well, nobody believes she is 97 years old!  97! Five years older than Nancy Reagan, 7 years older than the singing old woman.  But she stands straight, has all of her teeth, walks without assistance.  Yes, she has lines on her face, but not all that many.

And that's her problem.  I expect her to act the way she looks even though I know she is almost 100 and I probably should make more allowances for her than I do.

My visit with her on Tuesday was brief, 30 min vs. the hour I usually spend, because I as on my way to the hospital to work.  But it was one of her "distracted" days.  She really didn't seem interested in anything and even the things she says all the time were kind of like playing a record, not with any feeling behind them.  Again she asks who those cute little girls are in the picture on her cabinet.  She never, ever remembers who they are. I tried to let her know "what I've been doing that's exciting," which she wants to know every time but she never listened, just looked out the window or at her fingernails and asked me what I've been doing that's exciting.  She's always had perfectly manicured nails and Tuesday she had taken off some of the polish on some of her nails and just kept looking at them and picking at them and complaining that she had no nail polish (which she does...she often puts polish on her nails while we talk).  Even news of Jeri's impending visit didn't seem to excite her much.  She just sighed and said "well, it will be nice to see the kids..."  Usually Jeri's impending visits are the one things that makes her sparkle.

But she's 97 and she's in surprisingly good condition for someone who's 97.  I need to keep remembering that.

Knowing how miserable she is and how much difficulty she must have had getting into the chair, I didn't have the heart to move her.  So I'm finishing this entry and then am going back to the couch to see if I can go back to sleep without Frasier reruns to put me to sleep. 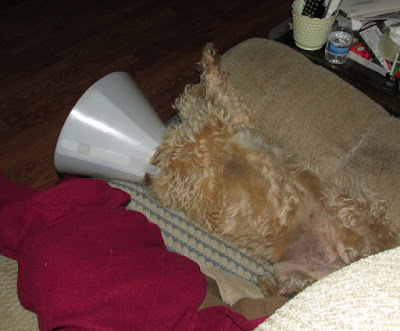 Email ThisBlogThis!Share to TwitterShare to FacebookShare to Pinterest
Labels: Lizzie, My Mother