The Sound of Silence

Years ago, Walt made it very easy for me to plan for Father's Day.  He declared that I was not his mother, so there was no point in his doing anything for me on Mother's Day (though he has sometimes). Mother's Day and Father's Days were days for the kids to honor him or me, so I don't make a big deal about Father's Day, but the dogs give him cards.  I absolutely LOVE the card from Sheila this year.

Ned is out of town this Father's Day, so there was no family thing, though he has promised to treat his father to a beer at the local brew pub when he returns.
I planned to make one of his favorite dinners (Burgundy Beef Balls) for dinner, but then forgot to make coffee for him when he was out at Mass this morning.   Bad me!

Mother's Day and Father's Day were big holidays when I was growing up.  We always shopped for my father and he always got some sort of flimsy lingerie for my mother on Mother's Day (I suspect that was a gift more for him than for my mother!).  He, my sister and I would sneak down into the basement and I would wrap his gift for my mother since he was terrible at wrapping and wrapping was one of the things I did best (I loved making ribbon roses and fancy bows).

There was always a big family dinner because we did everything with my grandparents (my father's parents).

As I look at Facebook this morning there are glowing tributes to people's fathers.
I wish I could have written any of those sentiments. But then I came to an entry which resonated with me.   This woman is mentally challenged, but maybe one of the smartest women around.


Your turn. I'm going. To be honest. With you. You hurt. My feelings. And other people's. Feelings too. When I. Was told. Of what. You did. It was. Hard to believe. Because I did. Not understand. Now I do. How could. You ever. Do the. Things you did. To everyone that. Loves you. And also. I was. So upset. With you. You did. As you pleased. Because you thought. It would not. Hurt anyones feelings. Well I'm. Sad to say. It did.

I could have written that entry.  "How could you ever do the things you did to everyone that (wants to) love you." Her entry went on to talk about the good things she remembered about her father, but she obviously has a lot of hurt memories too.

I wanted to write an entry about my father for Father's Day but it's very difficult to do, as difficult as it was, each year, to pick out a card that did not have an "I love you" sentiment, but something funny that included liquor.

He was not all bad.  He was a good provider. He didn't beat or abuse me.  We had a lot of fun times and there were tender moments--I think about the times we would be on empty country roads when he would put me in his lap and let me steer the car while he controlled the gas pedal because I was too small to reach the floor (now, as a parent, I'm appalled at the potential danger, but I remember it as a nice thing to do with him).

I don't know why one of my strongest memories was having "taste tests" of foods.  Milk in particular.  He would go out into the back porch, which had a window into the kitchen.  Karen and I would pour out two different brands of milk and hand them to him through the window, one at a time. He would taste them and see which he liked better.  Of course he always picked the richest, the one with the most fat.   Funny how strong a memory that is when so many others have disappeared.

But when I try to think of the fun times, I think of how they would invariably end--with him yelling at us because we did some little thing wrong or for no reason at all, and how we would be cowering in our beds, afraid of what would happen.  Nothing violent ever happened, but the long silences were terrible, silences caused by something you know you did, but didn't know what it was. Silences that might last hours or days or if you did something REALLY bad (that you didn't know you did), it might last weeks.  And then one day it was all right again and life went on. You didn't really know whose fault it was, but you always assumed it was yours.

I would like to write about how supportive he was, and how proud of me he was, but he was fond of criticizing things I did and laughing at me when I made a mistake and I don't remember his ever sounding proud of me, or ever saying "I love you..." without that being followed by "...so I want to tell you this about yourseslf..." When I brought him the first Lamplighters book, so proud of it, he glanced at it and then kind of tossed it at me and said "you might as well take this with you because I'll never look at it."

But if I sit here and force myself to think of only the good things and forget the bad, it is because of him that I have a wonderful sense of humor.  He could be the funniest guy in the world, and always the life of the party.  I remember the box of silly hats he had that he would pull out at a party and entertain everyone with (Ned has that box now).  Because of him, I can sing almost any popular song of the 30s and 40s and have a love of music.  This is a guy who should have been a musician instead of a postal worker, because music was his passion and he was never happier than when he was playing the piano, or listening to his jazz records.  He loved pianist Art Tatum the way I loved Judy Garland.

He loved to eat and he loved to cook, and I get my love of food from him.  He didn't cook a lot but when he did it was almost always wonderful (we won't talk about his peanut butter cookies that we had to drink because he did something and the batter had the consistency of skim milk.  We teased him about that all of his life, but he made a calzone that was to die for...I've never had once since that was as good).  He also made the best potato salad in the world and I have never had a potato salad that equalled his.  My mother could sort of make it, but she tended to over-salt it.  If there is something about him that I truly miss, it's his potato salad.

He was madly in love with San Francisco and I get my love of the city from him.   He loved it all of his life until he finally moved to Marin County and then he seemed to forget how much he loved San Francisco.

He loved his grandkids, and the happiest day in his life was the day he could walk with Jeri to the nearby ice cream store and buy her a cone.  He had been talking about doing that ever since I announced I was pregnant. The very last Christmas we had with him was the very best Christmas.  I've mentioned it before here and even included a video.  After years of assuming that he had nothing in common with his growing grandchildren, he suddenly found that they, too, loved jazz and they had a jazz session around the piano, Jeri and my father on the piano, Ned on the drums, Paul on guitar and Tom and David with noisemakers to add to the percussion.  I never saw my father happier.  By that time he was partly paralyzed on one side and couldn't play with his left hand any more and it hurt to sit at the piano bench for a long time, but despite that he was just glowing.

When I think of my father, I try not to think of all the ugly things he said to me before his death and to concentrate on Christmas and remember the person he was on that night and how happy he was to be having a jam session with his grandkids.  I sat there thinking "Finally, I have done something for him that makes him happy."

Happy Father's Day, Daddy--wherever you are. 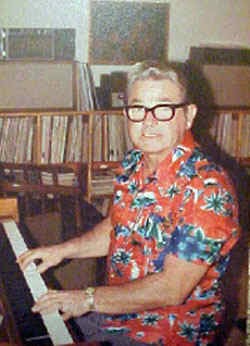 The best Father's Day message I saw this year was the one my brother wrote on FB. (He tagged me, so you can see it if you're interested.) We lost him thirty-six years ago and miss him more than I can say.