"What are you doing exciting for the rest of the afternoon?" she asked.  I had already answered that question more than half a dozen times in the apartment.  Now it appeared it was going to be the topic through our weekly lunch too.  And it was.  Sometimes she would interrupt me while I was telling her for the xxth time that I was going to finish writing my review and take a nap to ask the question again.

When I got back, she was amazed that I realized she was out of toilet paper because she meant to call me about it and she needed to start keeping a list.  She told me she needed to pay me but she didn't know if she had any checks and she would have to ask Ed to bring her some.  Then she asked me what exciting thing I was going to be doing for the rest of the afternoon.

I'm not depressed about these visits, really.  They just make me sad.  She would absolutely hate it if she knew what she is like today.   This is the thing she talked with me about for years...if she ever got like...this...could I please shoot her, she would joke.  Only now she is like this, and I have no plans for matricide, or to tell her that her worst fears have come true.  (Now her worst fear is having something happen that will force her to be incapacitated and dependent on someone else for her care.)

I love it when family come to visit her because it gives her a new audience and she actually can carry on a conversation that doesn't involve their exciting activities for the rest of the day.

One positive thing today, though, is that I don't think she mentioned "hunnert" once.  Now THAT makes it a good day!


Today Walt and I have been married 49 years.  We are celebrating in a romantic fashion that is typical for us.  Walt is going to the opera in San Francisco.  I am working at Logos and then taking the bus home because Walt will have the car.  I will have dinner alone and I will be asleep by the time he gets home, around midnight.  This is pretty much the way we celebrated last year too (minus the bus ride), but we went out to dinner the next night.

However, I have shows to review Friday, Saturday and Sunday nights, so I'm not sure if we're going to get dinner out at all.  We'll have to do a super duper fancy dinner a year from now, when the 50th rolls around. 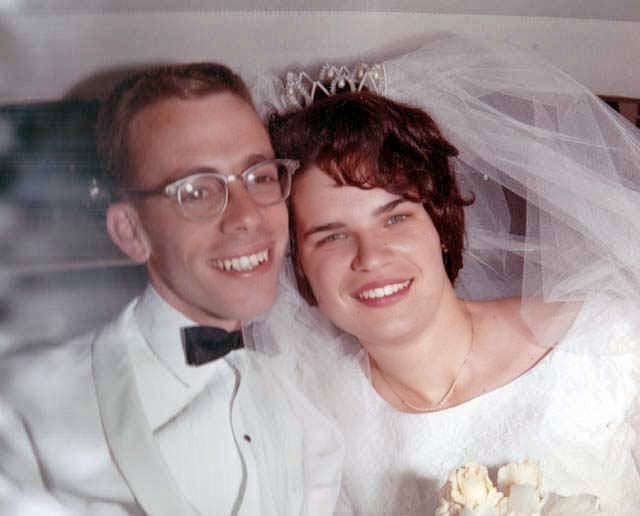 Email ThisBlogThis!Share to TwitterShare to FacebookShare to Pinterest
Labels: anniversary, My Mother

Happy anniversary! All you have to do is remember it.

It will be 46 for us this year, but Harry is much older than us chicks, and I may not be able to prod him into remembering.

What a beautiful picture! Congrats on your anniversary!

What a handsome couple you make! Congratulations! It'll be McScrooge and I's Silver Wedding this year.... here's hoping we make it to the Golden one!