I saw a blog challenge today.  It was to take a photo album and choose the first photo in which you appear, scan it, and talk about it.

Well....this house is photo album city and they are either up too high for me to reach, or upstairs, for the most part (and I didn't have that much energy tonight), but I did take out an album recently that was from 1960 so I decided to take a photo out of it.

This was taken at a luau in Hawaii, right after I graduated from high school.  It's my grandmother, my mother, our tour guide, and me.  There are a few things to talk about regarding this photo!

We were not people who traveled, but my godmother, who died a couple of years before I graduated, had left me a bit of money.  My plan, when I graduated from high school, was to enter the convent, so my mother suggested that we take the money and go on a trip to Hawaii, so I would have something special to remember once I got behind convent walls.  My grandmother decided to accompany us because she adored Hawaii and had been there two times before. (My father did NOT accompany us because he hated travel and never visited any state but California and Nevada in his lifetime, never rode on an airplane.)

We decided we would fly over and take the ocean liner Lurline back, so we could extend our vacation by the 5 days it would take for the crossing.

Our tour guide was a nice Hawaiian guy named Vern who took our group all over the island and we did all the touristy things -- the Kodak Show, a catamaran ride, an orchid farm, a broadcast of the radio show "Hawaii Calls" (when I fell in love with the golden voice of Haunani Kahelewai, whose recordings you can't find any more) etc., etc., etc.  We had free time too and spent an evening with my chemistry teacher's family.  I didn't know until then that Sister Mary Alice's name had been Wilma Kop in her pre-religious life.  Her family owned a Chinese restaurant and they ALL came out to meet us, though only her brother, it seems, could speak English.  We took over the top floor of the restaurant and had one of the best Chinese meals I've ever had.

My grandmother didn't go with us to the dinner and we were thrilled because by the middle of our first week, spending time with her was becoming wearing.   A dinner with her in San Francisco could be wearing.  A week out of San Francisco could become unbearable. My mother and I figured before we left home that we could spell each other when she got too much to take.

The luau was one of our last things to do in Waikiki and I don't remember much about it except that I had "lomi lomi salmon" and I loved it...not realizing I was eating raw fish (the first of lots of raw fish I have eaten over the years!).  I also learned about one-finger, two-finger, and three-finger poi (depending on how thick it was).

When I look at this photo I remember what one of my biggest worries at that point is my hair.  Until I graduated from high school, my mother took care of my hair.  She always set it and brushed it out.  Before we left on this trip I had it cut short, in preparation for the convent, but my mother still took care of it for me.  I was terrified of what would happen when I went into the convent because for the first six months, before I got my veil, I would have an uncovered head and I was not worried about convent rules, or the heat in St. Louis in the summer, or anything else--I was just worried about how I was going to set my hair because I had never done it.   Should have given me some clue as to the sincerity of my "vocation."

After the luau we sadly said goodbye to Vern, with whom we had become quite close.

We left on the Lurline, laden with leis from Sister Mary Alice's family (which we had to throw overboard right away because the scent of the plumaria was so strong in our stateroom, it was making me sick). 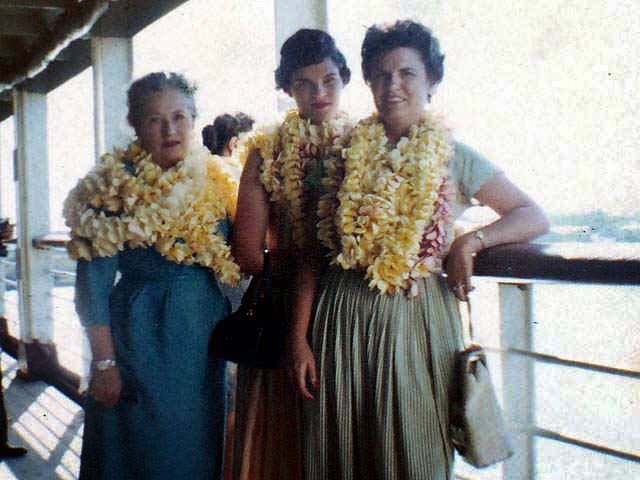 The cruise home was a HUGE mistake.  A cruise might not have been bad at the start of two weeks with my grandmother, but at the end of it, it was brutal...and we found out that an ocean liner isn't nearly big enough to hide when she wants to find you.

But we did survive, we returned to San Francisco and I did not go into the convent, but I didn't regret spending the money on the trip.

I don't know how, but somehow my grandmother learned a year or so later that Vern had gone through sexual reassignment surgery.
Posted by Bev Sykes at 12:04 AM

You do manage to have such INTERESTING experiences. 8^)