On hearing how much I was enjoying San Diego, someone on Facebook joked that it was a "cultural desert." Guess this must have been someone who has never been to Balboa Park, our destination for today.

In the morning, after breakfast, Lynn set out to examine the possibilities for a day in the park, with the help of her two canine assistants.

(It's easy to see in what high esteem the furry people here are held.)

After some disagreements with "Matilda," the GPS voice in Lynn's car, we got to Balboa park and were presented with such a plethora of cultural diversities that they didn't all fit on the map I was trying to decipher. I don't know how many museums there are in the park, but everything from the tiny camera club museum to the large natural history museum, and just about everything in between, including the zoo, which I recognized from my trip here with Peggy in 2000.

There were any number of street entertainers.

The froufrou on the buildings was definitely over the top.

It was a fabulous museum, tracing the history of photography. I was struck over and over again the power of photographs to capture an emotion that you can't capture in quite the same way with a painting. A photo captures that one split second in time when the subject may have been caught off guard and when the real essence of that person leaps off the print.

I was sorry photos weren't allowed, but certainly understand why they weren't, though there were many photos I wished I could copy just to be able to show what I meant.

A photo of Groucho Marx, for example. Totally candid and I almost didn't recognize him. Or a picture of a woman in a camp in Tanzania in the early 1900s, holding her baby. The picture on her face showed the total depression she was feeling and I found myself wondering what ever became of her. There was a picture of two very posh ladies draped in furs, wearing tiaras, alighting from a limo, with what had to have been an onlooker, the expression of disgust on his face evident.

And there was a sad quartet of photos of Marilyn Monroe, 3 taken for a Life magazine spread at the start of her career and a candid taken a short time before death, the ravages of fame so clear on her face.

I was very sorry to have to pass up a photo of a snowflake, taken very early in the history of photography, by a man who snapped individual snowflakes on black velvet...and had to take the pictures within 15 seconds before the flakes melted, to prove that no two snowflakes are alike.

I'm not sure what our own little quartet of pictures taken in a photo booth in the gift shop says about us, but we had to step into the booth and give it a try. (I suspect it says that we were having a good time!)

We finally left Balboa Park without having visited the Art Institute or the Air and Space Museum, or Museum of Man or the Timken Museum of art, or the Japanese Museum, or the Centro Cultural de la Raza, or the botanical garden or any one of a host of other museums just in Balboa Park alone. We didn't see the Youth Symphony Conservatory, Junior Theatre, Civic Youth Ballet, or Civic Dance Arts.

Definitely not a cultural wasteland!

We came home to feed and walk the dogs and then off to Old Town for dinner. Fortunately we had reservations at Cafe Coyote, one of the best Mexican restaurants in town, because the line to get in was very long.

But we were showed to our seat immediately and we contemplated our dinner choices over a nice big Cadillac Marguerita.

Dinner was fabulous, but too big, and we both brought home doggie bags.

We came home and collapsed in front of the TV. The last thing I remember was starting to watch The Medium and waking up at 9:30 to a completely dark house, with Lynn and the dogs already in bed.

It's been a full, but such a fun day. Sad to realize that I will be writing my next entry from home, as I leave in about 24 hours to fly back to Sacramento. 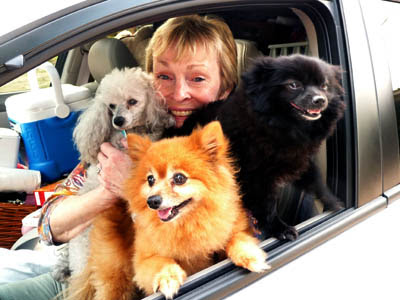 I don't think I could go to Balboa Park without a stop at the car museum. One of our favorite internet friends runs the place ;)