There was the sound of a train engine puffing and a train whistle blowing and I was proud. I had won the first of 3 games of Mexican Train that we played last night.

I'm not sure how this came to be called "Mexican train," but it is a game where you make trains of dominoes and try to get rid of all of the dominoes in your hand. The first person to do so hits the center of the little green thing there and it makes the sound of a train. Char's set choo-choos for about 5 minutes (or so it seems), which is terribly annoying. Pat's set gives a couple of polite choos and then shuts up, which is perfect.

The Pinata Women's Cousins Day Group has had another overnight party. It never seems like there are enough of us, and there aren't. Jeri (the "other" Jeri) was not in California and Michele, whom we assumed would be with us for all these parties when we first started planning them, died before we could start them.

But Pat, Char, Audrey and I enjoyed ourselves.

Char picked me up around 10 a.m. and we made our way into Sacramento to Pat's house. Audrey arrived an hour or so later. We sat around having crackers and cheese and wine (yeah wine. In the morning. Wanna make something of it?) while we got caught up on the ups and downs and ins and outs of our lives since the last time we were all together.

These gatherings are wonderful for lots of blood letting, talking about things that we may not have talked about with anybody else. There is laughter and nods of agreement and, when needed, a comforting touch.

We seem to spend a lot of time wondering how we all got to be so old, especially when we talk about our children, the oldest of whom is looking "50" close in the eye (though not quite yet). How did we get old enough to have children who are going to start getting into their fifties?

Around 2:30, Pat hauled out the salads we had all contributed. There was a 3-bean salad, a tortellini with lentil salad, a caprese (tomato and mozarella) salad, and a green salad filled with cherry tomatoes from Pat's garden, along with some fruit and the crackers, moved over to the table. We ate our fill and sat around the table chatting some more. Over lunch we bemoaned political issues...fortunately we all feel pretty much the same way, politically.

We eventually set up the game of Mexican train and played that until 8 p.m. or so, always talking. I won't mention that I won two of the three games, because that would be boastful and just rude.

Around 9, Pat offered us more wine or ice cream. We were ready for ice cream and who can resist something called "death by chocolate."

Because we are old, we were nodding off at 10 and decided to go to sleep.

We all, amazingly, slept well, even Char and I, both of whom have insomnia problems.

In the morning, Pat made blueberry waffles which she served on her brand new picnic table, which was made from wood cut from a redwood tree which had been growing on her husband's family ranch, which which had died and had to be cut down. The table(s) made from the wood were gorgeous.

You'll notice that on the table is also a bowl of fresh blueberries, for waffle topping. Char and Pat picked those berries (along with blackberries) yesterday, also from Pat's garden. They were delicious.

When it began to get warm, we came in the house and continued chatting (which we did pretty much nonstop for two days--it's what I love about these get togethers). We called Jeri (the "other" Jeri), on speaker phone so she could be a part of the gathering as well.

At 11:30, Pat pulled out the leftover salads and we all gorged ourselves for an early lunch and then packed up our cars to head home again.

I'm now going to post this because Char says she always has to check my journal to find out if she had a good time or not. 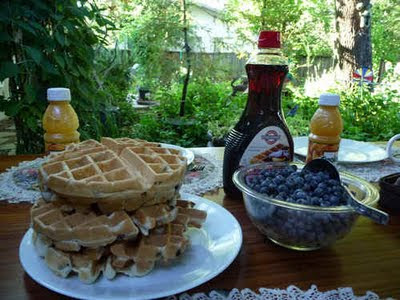 How wonderful to have an al fresco breakfast - that somebody else prepared. Nirvana!

We love to play Mexican Train, but we threw away the annoying train whistle thing-y. I play on line - it's terribly addictive.