Gay couples have been getting married in New York for nearly 12 hours now. More than 800 people were married in NYC alone, tons more at Niagara Falls, and who knows how many more across the state.

As far as I can tell, there has been no sign of fire and/or brimstone, horses have not dropped dead in the streets, and children have not been terrified (nor has there been a rise in pre-pubescent declaration of homosexuality by virtue of the fact that marriage is now legal).

But thousands of people in that state now have moved one step closer to full equality with their married neighbors. Except, of course, that if they travel to most other states they will be legal strangers to each other, their marriages having no legal standing whatsoever, and if one of them is a citizen of another country s/he will not be permitted to stay past his/her visa period by virtue of the fact that his/her spouse is an American citizen. (Also, despite the repeal of Don't Ask, Don't Tell, married same sex couples still cannot get equal benefits in the military).

But let's not cavil on this happy day. It's a huge step forward.

New York is the 6th, and largest state to legalize same sex marriage.

Of course not everyone loves gay marriage and the abominationists were out in force too. Members of the National Organization for Marriage (NOM) were there with their signs.

Their supporters chanted "Let the people vote! Let the people vote!" Why should people who are not involved in the issue get to decide the rules for people who are. Would you like the country to take a vote on whether or not you can marry the person you love? They are so keen on sanctity of marriage and marriage for procreation. I think we should vote on whether infertile people, older people, or people who have decided not to have children should be allowed to marry.

In interview with Christiane Amanpour, Mayor Michael Bloomberg reminded the viewers that when the country was first founded, it was legal in some areas to put homosexuals to death, black people were bought and sold like animals, and women were unable to vote, but over the years we have righted these wrongs and it's time to right this wrong.

When dogs can speak up and ask themselves for permission to marry their owners, I'll take this sign seriously.

But for now, I will just rejoice with those people who have waited so long and who have finally climbed up one more rung of the ladder toward full equality. 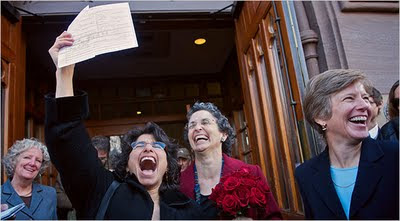 Friends of ours from New York crossed into Connecticut to get married -- legally. I guess lots of people did.

I would feel worse about Connecticut losing the wedding business if Greenwich were feeling the same economic woes as the rest of the country.