Yesterday was the day of rest and I took its meaning literally.  I mostly "rested."  I cranked out some Compassion letters and wrote letters to both Brianna and Lacie.  I had not written to them since they went to New York, so I could talk about their trip in my letter(s).  I also found a site where you can make one of those find-a-word puzzles and I made 2 for the girls, each with the same Harry Potter words:


But Lacie's is easier because the words just go forwards and backwards, where Bri's also uses diagonal words. 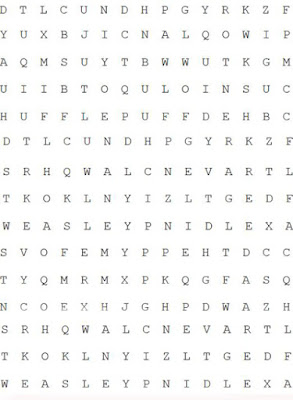 That took quite a bit of time (and took even more time to reproduce here!).

In the evening I watched the amazing World of Dance competition...I swear none of those people has any bones at all! ... and then the first two episodes of Outlander, season 2, after which I was able to fall asleep and pretty much slept through the night.

This morning Ned topped by on his way to Atria to box up my mother's stuff.  We talked about the disposition of her things and they will probably all end up out in the dump.  We could donate the furniture, but I suspect it has all been peed upon or bled into at one time or another and who would want it?  The dresser would be in good condition if one piece hadn't broken off and is missing.
Before Ned went to Atria, he took Walt to Kaiser to return the loaner C-PAP machine.  The 2 week test he took to see if it's working for him was very good and he is apparently getting better sleep, so we are getting one of our own.

I was almost out the door on my way to meet my friend Kathy for lunch when a text message came from Sandy, saying my mother needs extra meds to calm her confusion and aggressiveness.  So I guess that moving to house wasn't the answer, but he seems to know how to work with her so I sent off a request to her doctor.

I know some people are upset when they go into care homes and see people who look all drugged up and maybe that will be my mother, but if a drugged state can give her a better quality of life, why worry about it? She's certainly not happy now so maybe we can improve that medicinally.

Lunch was nice.  We are both in better places than we were a month ago and that is a good thing.
I ordered a small pizza for lunch and it was the size of the pizza  i would buy or make for Walt and me, so I brought home half and that will be his dinner tonight, along with the leftovers from last night's dinner.

He is having his first appointment with Cindy as I write this.  He had to leave his dentist of about 50 years in Berkeley because he doesn't feel he's up to the drive he needs to do to get there any more.  He even got a nice farewell letter from his old dentist.  I hope he likes Cindy's office as much as I do.
Posted by Bev Sykes at 12:08 PM

Email ThisBlogThis!Share to TwitterShare to FacebookShare to Pinterest
Labels: lunch with Kathy, puzzle for girls