Remember those days when your Dad (or Mom) would put the garbage out for the garbage men to collect?  I don't remember where they picked up our garbage, but they probably came into the back yard area (calling that tiny patch a back yard is very generous!)

The Sunset Scavenger Service took care of our garbage and thinking back on them as an adult, I have to admire their ability to park that huge garbage truck on our steep hill and schlep our garbage can out and dump the garbage.  My friend Stephen's father was a garbage man and his grandfather, who had done garbage in is day, owned the large apartment building in which they all lived (Stephen still lives there).  In my post-Soprano mind, I think often about how wealthy the family seemed to be and how they handled garbage for a living.  Was there a San Francisco mafia in the 1950s?

Those were the years when we never thought about things like ecology or taking care of the environment.  When we went for a drive and had papers to get rid of, we didn't stick them in a garbage can, we tossed them out the window.  It was a shock when Life Magazine's "watchbird" called us litterers and once I knew the watchbird was watching us, I felt guilty and tried not to litter any more.

But those were good times.  Carefree times.  Someone picked up our garbage, whether from the kitchen or what we tossed out the window.  We didn't know who they were, but somehow it always got picked up and we didn't think about it--especially little kids.

In this politically correct/ecologically conscious era, I blush at our wild extravagances.  But we were the victims of circumstances.

When we moved to Davis, we bought a nice big aluminum garbage can and had the choice of having our garbage picked up on the curb or they would come inside the fence and pick it up.  Being cheap, we opted for taking garbage to the curb, while our neighbors had theirs picked up inside their fence so they didn't have to have garbage cans sitting out in plain sight.  Every Monday night, Walt filled the big garbage can from all the wastebaskets and smaller cans and lugged it out to the curb.

All that changed when the City of Davis started being ecologically conscious and gave everybody in town two garbage cans (on wheels!).  The big one was for most of our garbage, but the smaller one had two sides.  In one side you threw away your glass or recyclable plastic and the other side was for paper.  Both cans were rolled out onto the street on garbage day and gone were the days when you could pay for personalized behind the fence service.  We were now all equal and my garbage as just as good (or bad) as anybody else's.

Our garbage day is Tuesday and on Tuesday everywhere you look there are garbage cans lined up along the curb.
Wednesday was the day they picked up yard waste, which you piled on the street so that the garbage trucks could come along with their huge jaws and pick it all up and drop it into that thing that mulches it instantly.

Things have gone along like this for a long time.  We carefully separate paper from garbage and it goes into the paper side, while the wine bottles and plastic bottles go into the other side.

But Davis isn't called the town of "all things right and relevant" for nothing.  Awhile ago, it was decided that separating things into garbage, paper, and recyclables wasn't enough.  Now we have to divide the garbage so that we separate out the organics.
They warned us about it several months ahead of time.

We started getting information.  And we eventually got a third garbage can plus a little organic bucket for inside the house, where we put all of our apple cores, banana peels, and things that won't fit down the garbage disposal.  For some reason, now paper towels aren't paper, they are organics.
Now we have three cans, the Papa can, the Mama can, and the baby can.

And we have a wee little individual can into which we put the week's food scraps--and paper
towels--to empty into the big can because they only pick up the big can once a month (so you have to remember which day).

(The problem with the little can is that as the week gets longer, especially on hot days, you can smell the rotting food.  You can buy special compostable bags..and that helps a little...but I'm still aware of rotting food.)

But the real problem is that it's darn complicated!  There is a FOUR PAGE booklet with all of the instructions for what to out where. 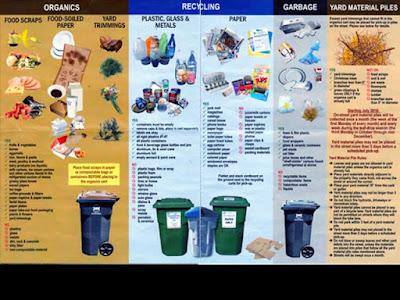 The list of what to recycle and what NOT to recycle is extensive and gone are the days when you just throw something away.  In the plastics bin, for example, containers must be empty, remove caps and lids and place in card separately, labels are OK.  Aluminum foil is also OK  But though this is for glass, no light bulbs, mirrors, dishes and pans, porcelain and ceramics.

For organics you can put greasy pizza boxes, take out food packaging, and a bunch of other things, as well as yard clippings.  Walt usually has yard clippings every week...now he has to hold it for a month...and will it fit?

But here is my problem right now.

This is the wrapper from some cheese.  It is foil, but it also has a paper label and, as you can see, it is smeared with food.  Is it paper, metal, or organic?

I'm too old for change.  I may have to move.

P.S.  Walt read this and told me that they do pick up organics once a week; it's the yard piles that only get picked up once a month -- see?  I am too stupid to learn this!

Email ThisBlogThis!Share to TwitterShare to FacebookShare to Pinterest
Labels: garbage