I didn't think it was a big problem at first.  Lizzie started limping on Monday.  It was more than limping; she wasn't using her right hind leg at all.

She had a session of limping a few months back.  I let it go a couple of days and she stopped, so I didn't worry about it this time for 2 days, but she was still not using the leg and had become lethargic (except when the dog over the back fence was out, then she ran out barking like she always does, which is why I wasn't worried about her).

I finally called to make an appointment with the vet and we hobbled in to see her yesterday morning.
She could find no problem with Lizzie's foot, which she had been licking, so took her in the back for x-rays and came back with the bad news.  She had torn her ACL (anterior cruciate ligament).  She laid out two options for us  The first involved having an orthopedist come in, break her leg and reset it.  That would "only" cost $4,000, but would be the surest way to fix it for good.

The other is a simpler procedure that the vet can do in house and will "only" cost ~$1,500.

Whenever something like this happens--and it seems that most of our dogs have had at least one "big" thing in their lives--it makes me wish for Peti-Care, but all things considered, Lizzie is about 9 years old and this is the first major problem she has had and if we had contributed monthly to a pet insurance we probably would have paid more.  I don't think Sheila ever had a big expensive thing happen to her in her 12 years.

Given her level of activity (not very active), I decided to go with the less expensive procedure. So she's scheduled for surgery.  She'll wear the "cone of shame" for awhile and won't be able to race out to chase after the dog in back.  It won't be a fun time for any of us, but hopefully the outcome will be good.

Our lives ("our" being a generic term meaning anybody who has and loves a dog) revolve around our companions.  I know that Lizzie and especially Polly are in charge of what goes on here during the day.

I wake up in the recliner and the trick is to sneak my iPad, which is on a shelf right at my elbow, into my lap so I can check e-mail before I have to "wake up" officially.  Polly never reacts when I take the iPad out and open it up, but no matter how silently I put it back, those bat-ears pick up the sound and she's wide awake.  When Polly is wide awake, there is no rest for the wicked until she has been fed.  She barks and barks and barks that shrill bark of hers that pierces you to the core and there is nothing to be done but to get up and fix breakfast for the dogs.

Lizzie is the one who legs me know if they need something.  If she needs for me to open the back door, or if she is out of water, I will be sitting here at my desk and will feel her nose poking my butt.  She's so polite about it (unlike Polly) that I get up right away to find out what it is that she needs.
On Sunday morning, Walt fixes his breakfast and it's the day of the week when he cooks sausage.  He always gives one sausage to me and gives me one sausage that I split between Polly and Lizzie.  Whenever Walt goes into the kitchen on Sunday morning, suddenly there is Lizzie under my feet and Polly standing behind me, both waiting patiently because they know they are going to get a bit of sausage.

They are insistent about dinner too.  It takes several weeks/months after Ashley has been here for them to get back to my schedule to feed them.  She feeds them earlier than I do.  They can be sound asleep and suddenly the dinner bell goes off in their heads and the are going to die of starvation of I don't feed them immediately.  Both pace and Polly barks.  When they are back on my schedule, they get fed after Jeopardy is over (7:30) and as soon as the theme music starts, Polly leaps off of the chair and starts barking to be fed.

But they are also nice to have around.  I never have to wonder if our bi-weekly water bottles have been delivered or if the Blue Apron guy has showed up with our box for the week because they bark the "you are an enemy; go away or I will kill you" bark.  By the same token, I always know when Walt has ridden up on his bike because of Polly's happy welcoming bark.

They don't like it when I sleep in the recliner and are often so restless if I stand up that I finally give up and go sleep on the couch for a few hours.  I have often put off writing this entry because the dogs want me to go to sleep.  Fortunately they don't seem to mind when I get up at 3 a.m. and move to the recliner, or decide to write a journal entry in the middle of the night. 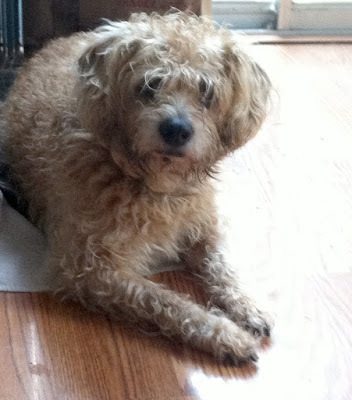 Just a heads up -- I am going to Char's tonight to go to a lecture by an author whose book we read a couple of months ago.  I am spending the night there and won't be writing an entry until I get home Friday morning.

I so know your pain . Thank God you have the money to do the surgery . Bless you and the lil one and many prayers going out for a good outcome .