It 9 months to November and I suspect that just like a pregnancy, this is going to be a continuing painful time for us.  It would be nice if we could have that comfortable, almost-pleasant mid-trimester, but I suspect this baby is going to be trouble the entire time.

If there is anything positive I can say about where we are in politics today it is that I went to pick up my mother's laundry (somehow dirty undies seem appropriate to this topic).  She did not have today's paper next to her and I found it on the table, unopened.  So I picked it up and pointed to the headline about Trump and Sanders winning New Hampshire.

Her ability to cover her inability to participate in a conversation or to understand what she reads worked well for me.  I started talking about the candidates and my frustration with the whole thing.  I must have talked for half an hour and every so often she'd interject something, but mostly she listened without letting me know she didn't have a clue what I was talking about.  But that was great.  I had the ear of someone willing to sit and listen to me rant and rave, and she got someone coming to visit her that she didn't have to entertain.

And she didn't once tell me how old she was.

Maybe this is the good part about this ridiculous election.

I am in such a quandary.  I hear from my buddies Bill, Hillary, Chelsea and Bernie at least a dozen times a day, often more because for some reason Hillary and Chelsea send me every notice twice on my normal account and another two times on my g-mail account.  I have stopped reading them.
This is such a frightening time in this country.  We have a real possibility of a President Donald Trump, which chills me to my core, and so the choice of the Democrat opponent is more important than it has been in the past.  Heck, even REPUBLICANS don't like Trump, to hear them talk!

But who is best to beat him?  Bernie or Hillary.  I go back and forth every day, sometimes more than once a day.  I should stop watching TV news, but it's like a train wreck.  I can't stop myself.

I really like Bernie.  I like what he stands for, I like his passion, I like his dedication to making this country great again (something Trump will not do, no matter how many hates and buttons he sells).  But he worries me for so many reasons.  It's wonderful to say that you are going to take on Wall Street and make college free, and give us single payer once and for all, but I have not heard him say HOW is going to do all that.  After watching Obama sail into the White House on promises that I believed in and then having watched him fight congress for eight years to get anything accomplished, I'm not sure how Bernie, who seems to be disliked not only in Congress but in his own home state, is going to accomplish that.  His medical plan alone, economists seem to think, will cost trillions of dollars.

(But then Trump, too, has made lots of promises that sound good on paper, but how is HE going to get tem through congress?  He's convinced Mexico will pay for that famous wall he wants to build, but he never says how, other than that he has good Mexican friends.  And as for deporting 11 million illegals...c'mon.  It's impossible.  Yet, he fires up his base every time he promises those things.)

I like Hillary too and I trust her more because of her wealth of experience.  She knows what it's like to be in the White House and she knows international relations, which are going to be so important in the next four years.  I haven't heard Bernie come out with a single plan for what he would do for various international situations.  He just slides back to the fact that if he taxes millionaires and billionaires everything would be hunky dory.

Five years ago, he proposed Universal Health Care, but could get no sponsors.  How is he going to do any better if he becomes president?  Those things do have to go through Congress, you know!

But then there are things about Hillary that bother me too and so i sit on the horns of a dilemma and it may be months before I know who I am really supporting.

One thing is for sure.  No matter which of them ends up winning the nomination, either of them would be head and shoulders over anybody on the Republican side.  Political analyst Ezra Klein says that "The rise of Donald Trump is a terrifying moment in American politics," adding "Trump is the most dangerous major candidate for president in memory. He pairs terrible ideas with an alarming temperament; he's a racist, a sexist, and a demagogue, but he's also a narcissist, a bully, and a dilettante. He lies so constantly and so fluently that it's hard to know if he even realizes he's lying. He delights in schoolyard taunts and luxuriates in backlash."

And what saddens me the most is how many Americans are buying all of the negative crap that is coming out of those debates and those rallys.  It scares me that this is the kind of country we are becoming.  No longer a kinder, gentler country but a meaner country with people who have lost their ability to feel anything for those less fortunate than they are, or those who are suffering around the world.

My mother has, for years, said repeatedly "I'm glad I'm as old as I am." I understand that now.  I feel sad for the world Brianna and Lacie will inherit if things don't change. 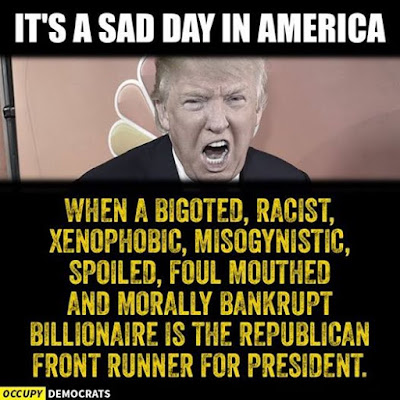 Email ThisBlogThis!Share to TwitterShare to FacebookShare to Pinterest
Labels: politics

You summed it up perfectly.I am also very concerned for our country and the lack of morality that Trump displays. I have friends who are good and kind people who support him-this has shocked me. Sally K.

We are shaking our heads here in the Great White North...good to know there are some thoughtful folks around . best wishes.