I "met" Alexandra Billings on line through Steve Schalchlin.  We corresponded a bit because we are both Judy Garland fanatics, and it's always nice to meet another one.

Alexandra is an absolutely gorgeous transgender woman who, when I first "met" her was doing cabaret in Los Angeles.  I bought a couple of her CDs.  She could belt out a torch song every bit as good as Judy Garland.

Now, for those who watch Transgender, she is Maura's friend Davina.

And so she was at the SAG awards this weekend (where her group was nominated for the best ensemble award, but lost out to Orange is the New Black).  She wrote this of the highlights of her evening and it touched me so much, I decided to share it.  I should share also that Alexandra is another person living with AIDS and has been for many years.

Highlights of The SAG Awards....

-Seeing Kevin Spacey smile at Viola Davis in a way that was about respect and admiration and ease and beauty. He saw in her a grace that she exudes constantly and was so very grateful to be in the room while that caught fire.


-Telling Carol Burnett that out of the three times I tried to commit suicide, I was saved once by Phil Donahue, once by Lucille Ball and once by her. As she wept openly, she took my hand as I knelt down, and said: "That is extraordinary and I don't know what to do..." So we Shattered together and I held on to her as she held on to me and my wife snapped a picture and my past met up with my present and I saw my blessed life land softly in the hand of the Divine. 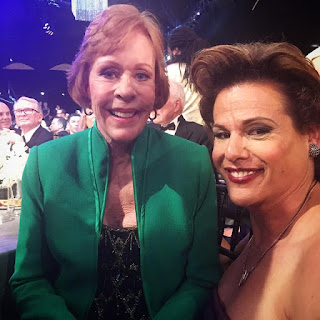 -Kissing my wife and watching her fall apart as she met some of the Big Bang cast. Her entire vessel was shaking.

-Taking off my shoes and finding a Dunkin Donuts booth on the way out. We bought 4 bags of donuts and I put 22 packets of sugar in my coffee. I still have the urge to dust everything in my house. Twice.

-I took a moment and I looked around and I remembered being somewhere in my twenties and being told I would be dead within 6 months. That the infection was racing through me and that time was my true enemy. And so I sat there in that room and I took a moment and I saw Our Lady J and I saw Trace Lysette and Hari Neff and Van Barnes and Laverne Cox and we were all present and awake and being held by our history and our life force. And I knew, as deeply as I ever had before, that who we were mattered just as much and who we Became. And that we were seen. And that we were lead. And that we were enough.

And for the years I felt depleted, I suddenly felt expansive. I took up a little more space.

And so we give back. And so it goes on. And our sisters of the present revolution will not perish and so our brothers of the former did not die, for we are keeping alive the very foundation from which we all came. And we do that by being together. And by looking around. If only for a moment.