I finally gave Walt his birthday present today.  I took him to The Dead Fish restaurant for lunch.

This is a place in Crockett, about an hour's drive from here.  I had been there twice before, once with Char and her daughter and Susan from Logos (who is Char's cousin), and once I met Char there for lunch.  They have wonderful crab and as a ban on Dungeness crab imposed in November of 2015 because they discovered toxic levels of domoic acid in Dungeness and rock crabs had been in place, we hadn't been able to eat crab.  The ban was lifted earlier in February and we are free to eat local crab again, so this was our chance to indulge.

I made a reservation on Open Table and was so glad I had because I requested a window table and when we got there the place was mobbed, with people waiting...but there was a wonderful window table reserved for us and we were seated immediately. 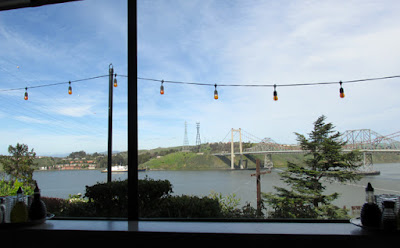 It's an amazing place because it is so very, very busy but they have a huge wait and support staff and the whole experience is very efficient.  Our waiter put our drink order into his hand-held computer, which communicates with the bar, and by the time he had taken our food order and left the table, our drinks had arrived.  It doesn't hurt that the food is delicious!

I ordered what I had last time, which was garlic noodles with crab.

You expect to get a bowl full of noodles with crab on top...and you do.  But there is also crab mixed all in the noodles so much so that when you are finishing the noodles at the bottom of the bowl, you can still find crab claw meat.  It's wonderful.  Walt had crab Alfredo, which also looked wonderful.

Walt had wine, I had water because I had promised to be the designated driver so he could have wine (and I would not have had wine anyway).

We just had a lovely afternoon, looking out at San Francisco Bay, the Carquinez Bridge, and off to the left, the Maritime Academy and it's training ship.

The drive down had been absolutely gorgeous.  We are in the middle of that wonderful California spring, which seems to last about an hour and a half, where all the hills are a deep green and wild flowers are popping out.  I found it all so breathtaking, I took a long frontage road at one point so I could take pictures

My mother, in her more lucid days, use to marvel at how many different shades of green there are in nature, and you can sure see that in this photo.  I couldn't pull over where the purple lupin was more plentiful, but I did get a spot to take at least one photo of the wildflowers.

We got home in time to catch a brief nap before the Oscars started.  Not the best year and lots of weird stuff...plus it ran 30 minutes long.  I had not seen most of the nominated films (not for best picture or for actor awards), but the two I had seen both won -- Brie Larson for Room and Spotlight as best picture.  I have no desire to see Revinant but was happy to see that Leonardo DiCaprio finally got an Oscar.  He as done such good work and seems a genuine good guy without scandal behind him.  I was happy for him.  Oh.  I also saw Inside Out on the plane going to Europe and was happy that it won for feature animation.

But on the whole, the show was kind of boring and the most puzzling thing about it was the choice of music to play as people enter or exit the stage, music which seemed to come from left field and have zero connection to the person entering or leaving (Cate Blanchett and Reese Witherspoon played on to "The Way We Were," for example).

Best of all, it was over by 9 p.m., with lots of time stretching out in the evening to write this and finish my review of Twelfth Night, which we saw yesterday.
Posted by Bev Sykes at 12:00 AM