There is no "dinner of the day" photo because I didn't have dinner tonight.  It takes a lot to make me want to give up a meal -- keeping this body in shape takes work, you know! -- but today seemed like one long feast, punctuated by naps, and by dinner time, even though one of my favorites -- chicken kiev -- was on the menu, I couldn't even think of food, and took a nap instead.

After breakfast this morning, we docked in the city of Zaporozhye, an industrial city, the sixth largest in Ukraine. It is also the site of a hydroelectric dam, completed in 1932, at the time the largest in the world, now woefully inadequate to supply enough energy for all of the current residents.

We had a brief tour of the main part of the town, rather mundane and kind of "tired" looking, though it did have a McDonald's. 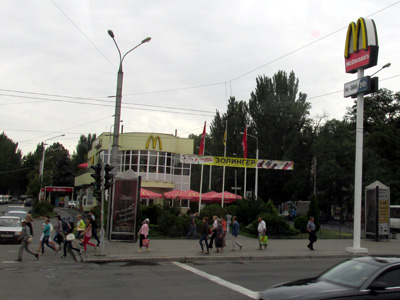 The bus stopped at a little park, with a lovely water fountain and a small group of artisans selling my kinda souvenirs--mostly junk, but some nicely done.  I picked up, for example, a painting of some violets that I bought to hang outside my mother's apartment, to distinguish it from all the other identical apartments.  We also got a couple of magnets and a couple of little toys for Brianna and Lacie.

(we didn't buy any of these, but I liked that the artist was
painting them right there at the table)

Then we drove to a museum which detailed the history of the Cossacks.  You can see how little attention is given to prettying things up.  The parking lot is a bit of a schlep to the museum, and no attempt had been made to make the walk to the museum at all interesting or attractive.  The museum, dating to the early days of the Cossacks, essentially Ukraine's mafia and Catherine the Great's hit men, was small, but interesting.  Outside on a tall hill sit the two symbols of Ukraine:  the flag, and the cross!

We went back to the bus and then on to the event I'd been most looking for--the Cossack horse show.  It did not disappoint.  What amazing horsemanship is displayed, and enough tomfoolery to please the most loyal Three Stooges fans. 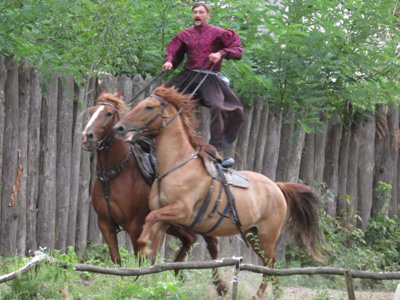 I can hardly wait to get home and sort through the photos and post to Flickr.  I was very happy with lots of the shots that I got.

Of course, we sat there watching and sipping some Ukrainian beer.

After the show, we wandered around the complex, buying souvenirs and tasting a Cossack pork and rice dish (which was delicious) and drinking Cossack vodka, which was not nearly as strong as I expected it to be...of course, I only had a sip and perhaps if I had chugged it, as you are supposed to do, I would not have said that!

I bought a great little wall hanging of a horse, done with one of those wood burning tools, for myself and the artist signed it after I paid for it. 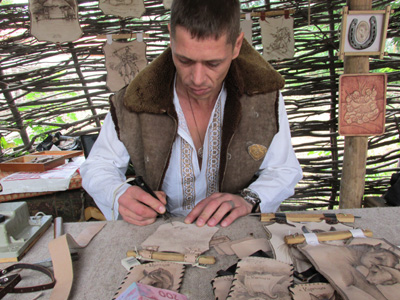 After our Cossack snack, we were back to the ship in time for lunch, during which we went through the deepest lock in Europe.

Following lunch I couldn't move so took a nap while Walt and Mike went up to the sky bar for a lesson in the Ukrainian language.  I woke up just in time to go to the Ukrainian tea party, where coffee, tea and an assortment of sweets were served by the serving girls dressed in native costumes.  These two are the ones who usually serve us.

this is just a fraction of the treats that were available.

I can't remember exactly what happened next, but I may have taken another nap.  I instructed Walt to wake me up so we could go to the exclusive cocktail party for returning Viking customers -- there are about 68 on this cruise, or slightly less than half the passengers!  It was a nice party, with champagne and hors d'oeuvres and toasts by the crew.

(And for those who have watched Orange is the New Black, the chef here is so "Red.") 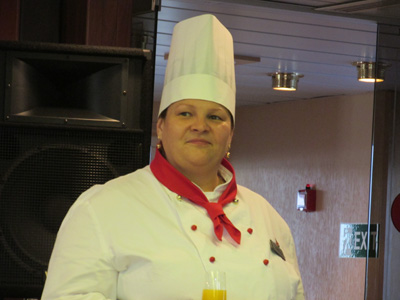 The cocktail party was followed by a very short briefing on the activities of tomorrow and then dinner was announced.  I couldn't even think of eating, not even Chicken Kiev, so I watched another beautiful sunset and then went to the cabin and took another nap...

...until time for the evening's entertainment, a trio of musicians singing Ukrainian folk
songs.  Char opted not to come, but Mike and Walt did and it was interesting sitting between the two of them, watching the entertainment.

This is the kind of stuff I come on these cruises for, a glimpse at the local culture, a sample of the local music, and just the schlockiness of these kinds of performances.  I love it and eat it up.  These shows are to me what military history museums are to Char!
Now it is midnight once again, everyone has left the library and the ship is mine alone once more.  I do love these late night trysts with my computer.

Tomorrow appears to be a less stressful day (not as much eating, not as much touring, more sailing).  My main goal for tomorrow is to find some place that sells batteries because I didn't bring as many as I thought I had, and we are only on day 4 and I'm running very low.

PHOTO OF THE DAY 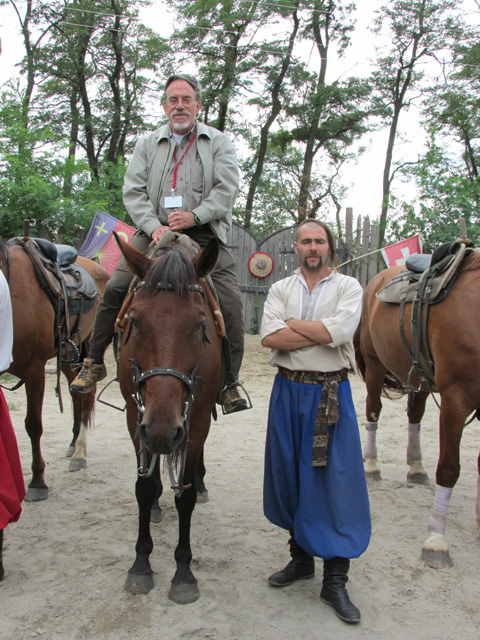 (He didn't just sit on the horse, the Cossack lead the horse around so he could
actually ride it.  He said he felt like a little kid again!)