If you have been following my Pen Pal Project (and there is no reason why you should have been), I can cautiously say that I've reached a really nice place. I'm actually getting mail almost every day. Sometimes it's only a post card, but there are more days when I do get personal mail than there are days when I don't.

Of course if there is no personal mail, there are also almost every single day three catalogs from fat lady stores. I just cringe and think about how many trees I personally am responsible for the death of!

Out of all of this wonderful new influx of mail, there are many people, of course, whom I will never hear from again. Those are the people from Postcrossing and Swap-Bot who send their...whatevers...to me to fulfill the commitment to participate in a certain mailing task. And then I will never hear from them again.

There are some who never answer letters I send, and a couple of people whose letters I have not answered because the chemistry just wasn't there. One of those was a young man in Brasil. I wrote to him against my better judgment simply because I have such a history with young men from Brasil and I thought it might be fun. I was mistaken.

He's in his 30s and his first letters sounded like someone who was looking for a date, sending out a weird veryshort questionnaire for me to answer. I wrote back a message that amounted to "thanks, but no thanks." He responded with a four page letter filled with every single band, song, movie, actor, TV program, sports figure and I don't know what else because I stopped reading. I just tossed it. This was not going to be a correspondence made in heaven.

There are nearly 20 pen pals who have the potential of lasting for awhile. I find I am more drawn to people in this country, simply because of the cost of postage, but there are two, a woman from Wales and another from The Netherlands whom I like and will continue to write to.

One woman came from a group of people who like to write long letters. I thought I liked to write long letters until I got her first one, which came in an 8x11 envelope and was thirty pages long. Typed. I needed bookmarks to read the whole letter. I'm on the fence about her. At least half of the letter was about her physical problems and I would think that over time that sort of thing could get tiresome, but perhaps now that she has written this lengthy introduction, future letters won't be quite so exhaustive.

There are a few I really like and have already exchanged 3 or 4 letters with. I know those will last for an indefinite period, until they get tired of hearing from me.

There are also my Compassion kids on the pen pal list and the two soldiers in Afghanistan, though I have not heard from either of them. I wrote to the woman who coordinates this Soldiers Angels project and she said that many times you don't hear from your assigned soldier at all, so I guess I just keep writing and hope that the letters are (a) being delivered, and (b) helpful. At least both soldiers are named Amanda, so I can do one letter and just print it twice!

And I've written a few letters to old friends who live at a distance and with whom I've only had an e-mail relationship for many years. Time will tell what the response to that will be. I wrote a 4 page letter today to someone I have not heard from in almost a year. I suspect she is going to be surprised to find it in her mailbox.

Jeri is also on my penpal list. She occasionally writes letters while she's at a cafe or some other place. I actually went out and bought a notebook that fits in my purse and a pen that I liked when I tried it out at Office Max and I'm going to try to hand write letters to her from time to time. I have a letter started and as I was writing it, I remembered that in my lifetime I think I have only received two letters from my mother--she's more the telephoning type--but I really felt very special when I got them, so I decided I wanted Jeri to have handwritten letters from me.

A bonus of hand writing a letter or a note card and all those postcards that I've been sending is that when I want to now, my handwriting is looking better. Not always, but for so many years, my handwriting was just atrocious because I never wrote anything at all (I even typed shopping lists!)

(I've written to Ned and to Tom, but don't expect either of those letters will turn into a "correspondence." It seems to be more a girl thing than a guy thing!)

But the bottom line is that I started this because I sorely miss communicating with people so I started investigating pen pals and discovered this huge community of people who also like to reach out and touch someone through snail mail. I'm learning to decorate envelopes, buy stamps through the mail so I can get commemoratives that our local post office doesn't carry, look at magazines and think about whether the pages could be turned into interesting envelopes, check out rubber stamps, etc.

It's a whole new world out there and I'm very much enjoying it! 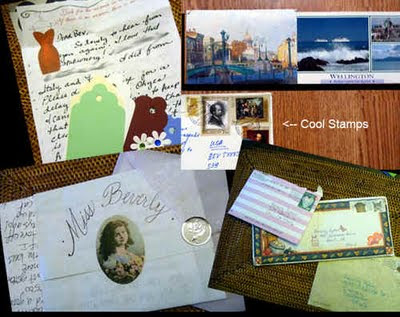 Oh how lovely , you are getting mail everyday . Is that not lovely when you go to the mail box and it is full of wonderful goodies ? I know it is for me . I too enjoy your letters very much .So please keep writing and I will also .

You really are enjoying your letter-writing. Super!

Many years ago, when we lived in different states, I exchanged letters with my mother often - but we were both typists, so no handwritten stuff. Then she moved near us, so that was all of that. For as long as she lived after John and I married (@ 35 years), his mother and I corresponded at least weekly - again all typewritten. A few of those survive, but that's all.

I still handwrite thank-you, birthday, and condolence notes, but no letters any more - just e-mails.

I think this is really cool. A personal touch in this digital age!

Most of my letters are still typewritten...those are the interesting ones!