If she were still alive, Judy Garland would have been 89 years old today. I had a friend, also a Garland fan, who always imagined her becoming a grand diva, like Sophie Tucker, and living a long life. I always knew on some level that she would die early. In fact she died at age 47, when Paul was a baby. I can still remember sitting on the couch in the living room of our Oakland home when my mother called to ask, jokingly, if I were in mourning. It always hurt somewhat that she thought it funny that I would feel so deeply sad at the passing of a performer I had loved since I was 10 years old.

In many ways it's probably good that she died so young. She didn't have to move forward into her later years, with the kinds of plastic surgery that has made such bizarre looking figures out of some of the stars we have loved over the years. None, perhaps, as bad as Joan Rivers, but there are enough of them out there with frozen faces and misshapen faces that I'm glad Garland never reached that point.

Turner Classic Movies always runs marathon movies of stars on their birthdays, and the Garland marathon started around 5:30 with her very first major movie, Everybody Sing. I was aware of it starting, but slept through most of it. I saw more of The Clock, her first grown up, non-singing role in 1945, a very sweet story of a boy and a girl meeting in Grand Central Station in New York, he in town for 2 days on leave from the Army, she on her way to work. Over the course of two days, they fall in love, lose each other, find each other, and marry. I always wondered why they called it The Clock because a clock plays only a very minor role in the story, but I suppose it sounded good as a title.

I noticed for the first time, in the credits, that James Gleason, who plays a milkman in the movie, has a wife...and the wife is played by Gleason's real life wife, Lucille. Just an odd bit of trivia.

The Clock was followed by The Pirate, one of my least favorite Garland movies, which was just as well because I had to leave to go and give blood while it was on.

What's so difficult about taking blood? I have been donating for years at the same place with never a problem. You walk in the door and they greet you by name, the same person takes your blood, it takes me 5-8 minutes to fill a bag, and I'm at the donuts in no time flat. Lately, however, there have been new people and new procedures which involve in-depth examination of the same arm that has given nearly 40 pints of blood already, marking the spot with tape and ink and having you do things that they told me years ago I didn't need to do. Last time, the blood taker tried three different spots on/around the same vein and finally had to call someone to help her. Today's person got the blood started all right, but it wasn't going fast enough and she kept saying she had put the needle "in a bad place." She finally gave up, with the bag "almost half full" after more than 10 minutes. I don't know what they do with not full bags, but I get credit for a "real donation" (she told me).

By the time I got home again (after stopping at Peet's for coffee beans), The Pirate was ending and Summer Stock was just starting. I actually slept through the end of Summer Stock and the beginning of A Star Is Born (it's not like I haven't seen it before!) and when that ended I Could Go on Singing was rounding out the marathon.

I love that movie, not because it's such a good movie -- it's a kind of cheesy story of a mother who gave up her son to his father and is now trying to get him back -- but this seems more like The Judy Garland Story since there is a lot of her giving a concert to a filled Palladium in London and during an emotional scene she utters these words, which sound so much like something Judy Garland herself would have said during moments of stress.

I can't be spread so thin, I'm just one person. I don't want to be rolled out like a pastry so everybody can get a nice big bite of me. I'm just me. I belong to myself. I can do whatever I damn well please with myself and nobody can ask any questions....Well I'm not gonna do it anymore. And that's final! its just not worth all the deaths that I have to die.

So I've wallowed in Judy Garland today and it was a nice way to spend the day.

In other news, we have a visitor. Remember Cappuccino?

Cappy was adopted a few months ago and his new Mom is going off on vacation to Hawaii, so she asked if he could spend the next couple of weeks here. I was a little concerned about how Polly would take to having a "new" dog here, but the two of them have been chasing each other around the house ever since Cappy arrived. I think Polly is happy to have someone her own size to play with.

I was also concerned about how having a strange dog here would affect my insomnia, but Polly lets Cappy share my lap and somehow having two dogs on me all night long helped me have the best night of sleep I've had since we got back from China. So all is good.

And besides, they are just so cute together! 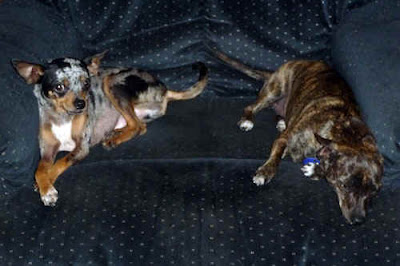 We always credited a donor with a full donation if the needle went in, even if it didn't produce a single drop. (The phlebotomist's fault, not the donor's.)

We used to tell people that a QNS (quantity not sufficient) could be used for research, but then the same people who taught us that said we weren't to say it any more. However, I believe there are uses for such blood, though it can't be used for transfusion.

Oh they are very cute and precious . she will be missed when she goes back home I betcha .