That Raveled Sleeve of Care

I've had no lunch. I'm waiting for someone to bring me a menu so I know what to order for dinner.

I have not taken a photograph today, which seems weird.

But I eventuallyfound the kitchen table, which was heaped high with non-clothes stuff from my suitcase. Still looking for all those barf bags from all those airplanes that I planned to use for envelopes!

I manage to group all the things together into little bags for the gifts that we're giving.

I discovered we bought waaay more postcards than I expected, which is OK because I will send them to pen pals and Postcrossing people over the next few months, as well as keep some for me.

We also bought more books than I realized, but such great photographic memories of gorgeous places like the Li River and the 3 Gorges. I took some good photos of all those places, but nothing beats a professional photographer and a clear day!

I scanned the photo from the Great Wall, so it's more clear now, and tried to identify everyone so I can remember them in years to come. I'm missing a few names, but I think I got most people numbered. 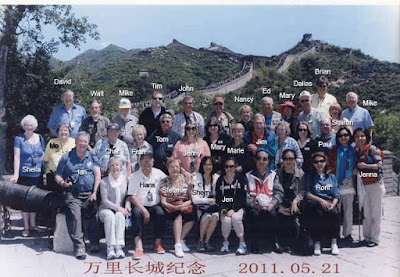 The two people sitting between Jen and Roni in front were the parents of the girl left to Jenna, on the right (Char thinks her name was Wei). They were Chinese and only spoke Chinese, so we didn't get a chance to know them. I didn't know Nancy and Ed very well either, but took their picture at the Terra Cotta warriors. She gave me her e-mail address and it is somewhere in all of Walt's little pieces of paper. I hope he finds it so I can e-mail them the photo.

Dallas was quite a character, though sometimes his humor bordered on being offensive, but he was a fun guy...and Mike (on the far right), who is from England, was a sweetheart and a real gentleman. I'm also sorry that we did not exchange contact information with Marie and Jim, with whom we probably spent the most time during the ship part of the trip, but I kind of had the feeling that we were good ship friends for Marie and she really didn't want to continue any sort of off-ship friendship (unlike Sharon and Brian, who have invited us to come and stay with them in London!)

The one thing about this group is that we really did become more friendly with a lot of them than we did in Russia. I think this is partly due to tables for 8 in the dining room. In Russia, we always sat together in a table for 4, but there were no tables for 4 in China and so we got to know Marie & Jim, Sharon and Brian, and Sherry and Jen, who rotated in and out of our table.

Oddy enough, when the regular cruise ended and the extension to Hong Kong took over, only 6 from Jenna's group went to Hong Kong, but there were 22 in the group, coming from other leaders' groups. They never made any attempt to merge with us, and seemed to ignore any attempt by any of us to make friends. Even when we went to the airport, Char, Mike, Sherry, Jen, Walt and I had our usual seats at the front of the bus and the other couple riding with us sat in the back of the bus, leaving a couple of seats between us. We saw them in the airport and they barely waved back at us. But then they were in business class and we were in economy, so that may explain something.

But that's OK...We had a good time, even if nobody outside our group wanted to get to know us.
Posted by Bev Sykes at 5:49 PM