I may have difficulty calling it a "bathroom" again, since Jenna, our tour guide, keeps referring to it as "the happy room," which we all seem to be doing now.

What a long, full day it has been, but what fun! This entry is going to be very long, and full of photos with lots, lots more on Flickr. Be glad you can read it while sitting down...my feet are still tired (but happy).

So we started with the breakfast buffet here at the hotel. Reports I'd been getting were that it was fabulous and they weren't kidding. Whatever you wanted, Western or Eastern or in between, they had it. This was Walt's breakfast:

I ask...where else can you get eggs Benedict (on a bagel), pot stickers, fried noodles and hash browns in one breakfast? He went back for some soft tofu that looked like it was dropping blood, several steamed buns, an egg roll, and that white thing with black specks on it, which I thought I understood the cook to say was "chicken fruit." It's a melony-thing with a mild flavor.

And I loved how they serve honey:

The whole honey comb set on a stand with a spigot that drops into the little bowl on the right.

When breakfast was finished, we got our stuff together and went to the bus, for our first meeting with Jenna, our tour guide, and the rest of our group, who will be with us, now, to the end. Shanghai is a very modern city, with skyscrapers of which the people are very proud. Jenna explained that most of the new buildings you see have been built in the last 20 years. There is a great move to get rid of the old and to replace it with the new. You see huge building projects all over the city, and architects seem to have been given the opportunity to do the odd and the unusual because all of these new buildings are definitely unique.

Our first stop, though, was Old Shanghai, which has been preserved as it was during the Ming Dynasty. Parenthetically, let me say here that the problems we Americans have is that we have never been "conquered." In Russia last year and here in China we heard so much about regime change and how it affected the people. It's difficult to keep all the Dynasties straight, let alone how it affected the citizens. I look at the people in China today, compared to my mental image of the days of Mao, when they all dressed in somber garb, a uniform for the entire country. I suspect the Chinese youth today can't hope to relate to the memories of their parents and/or grandparents.

But someone recognized the value of the old, and so they have preserved pockets of Old Shanghai. Naturally, the very first thing we saw in "old" Shanghai was an old friend.

We were headed to Yuyuan Garden, finished in 1577 (during the Ming dynasty) and made for the builder's parents to "enjoy a tranquil and happy time in their old age." Ahhh..those Chinese. They know how to value their elders!

On the bridge leading to the garden, Jenna explains that there are 9 zigs and zags in the bridge because 9 is a lucky number, the Chinese believe (we knew that from our China class!).

These lions guard the entrance to the garden. Lions are very big around here and you usually see them in pairs, one male and one female. I just loved the female of this pair because she has such a maternal look on her face as she plays with her baby.

This is just one small part of the garden, which is as big on its rock formations as it is on its flowers and trees.

I'm kinda liking this dragon fence to erect between us and Mr. McCoy at home! Think that might keep him from being angry with the dogs?

We had 15 minutes to wander around the shop area in Old Town, but I wasn't interested in buying anything, so we kind of stuck close to Jenna, except for going off the the Dairy Queen to get a smoothie!

Our next stop was a silk carpet factory. All the rugs are made by hand and watching these women work was fascinating.

The rugs were beautiful, but all I could imagine was Polly's first day on a $7,000 rug. Definitely not my cuppa tea! (lots more pictures of the rugs are on the Flickr page for this day). When I showed interest in a teeny panda rug (because I wanted to take a picture of it)...

...a salesperson was right there to offer me a good deal on it. When I said I wasn't interested, she started her spiel until I mentioned the magic word: dogs. After that she left me alone! The one thing I was really surprised to learn is that a silk carpet rug changes color if you spin it around. It must be the light hitting the nap at a different angle. Our carpet guide showed us with several rugs and the color changed every time. Pay thousands of dollars for a rug and it does tricks for you!

We had lunch in the cafeteria here and I was surprised that even Char had not heard of Mongolian BBQ, which I have from time to time in Sacramento.

It was time to get back on the bus and head for our next stop, the Shanghai Museum...

...where we spent two hours looking at jade, porcelain, native costumes, furniture, the history of money in China, and a host of other things. I particularly liked the jade. 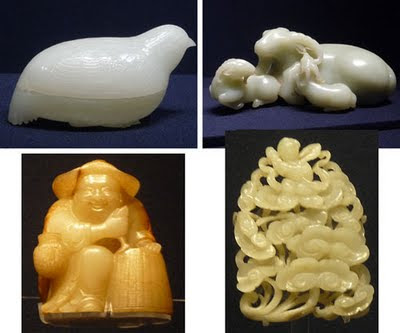 I loved the plain look of the dove box, the whimsy of the mother goat playing with her kids, the humor of the fisherman, and the intricacy of the boy with a fungus (the boy is at the very top and the fungus makes up the rest). Char was less impressed with the jade but loved the porcelain. I was less impressed with the porcelain, though did like this 11th century gay pride vase.

I bought my first tsatskes in the gift shop here and we were 8 minutes late getting back to the bus because of it. Bad me! I don't wear a watch and since I'm in China, I don't have my cell phone to use as a time piece. But nobody scolded us. We were dropped at the hotel for our "free time" (all 2 hrs of it)...not enough for a nap or to do anything (note all of you chiders--I had two hours free in my room and I did not open the computer!). I sat and read, Walt did go wander the neighborhood, which he loves to do.

At 5, we went the the Ocean Hotel's restaurant where we had...omigawd...the most delicious feast! The food just kept coming and coming.

At one point I looked up and saw the reflection on the mirrored ceiling, so here's what it looks like from above:

We had eleven different main dishes and two desserts and I would be hard pressed to say which I liked the best. Suffice it to say, nobody walked away hungry!

And then it was off to the acrobat show, which I'd heard such good things about. I had hoped to take pictures, which many people have done, but they requested no cameras, and as a conscientious theater critic, I obeyed. So no photos from this event. A few months back, I reviewed a show called Cirque dreams. This was very similar. Judging by the age of most of the performers, I am wondering if, like the ballet we went to in St. Petersburg, this is the top of the student groups. It was Ed Sullivan on steroids (I think I may have used that phrase in my previous review!) They did rope tricks, twirled plates, jumped through hoops, spun yo-yo like things and balanced on impossibly high structures (though the fear factor is gone because the balancer is tied to a rope). And it ended with a spectacular 7-motorcycle race around a giant hamster ball-like structure. That was very cool. As a jaded reviewer, I found it OK, but nothing spectacular. But it was definitely entertaining.

Now we are settled in for the night and in the morning we will walk the Bund after breakfast and then fly to Wuhan, where we board the Viking Emerald for our Yangtze experience.

We are having a fabulous time! I don't have a clue if I can post tomorrow, but hold the good thought! Now I'm going to visit the happy room and then go to sleep.