Wouldn't It Be Loverly? 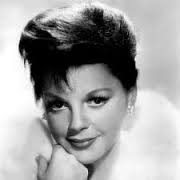 Hard to believe that if she were alive today, Judy Garland would be 93, or in other words "almost hunnert."  She was 47 when she died, an age that seemed so old to me in 1969 but today seems so young, since two of my children are older than that!  Proves that age is all relative.

Speaking of being "almost hunnert" (did you know my mother is almost hunnert?).  I came away from Atria today, after four hours with my mother, with such an incredible admiration (as well as sympathy) for caregivers who take care of loved ones on a 24/7 basis.  My mother has good days and bad days and I always arrive hoping this will be one of her good days.

It was one of her less good days, when she seemed just very tired and unable to concentrate on anything.  I've started trying to bring her news of all the "exciting" things I've been doing since I last saw her (2 days ago), since that's usually the first thing she asks me.  "Exciting" in my life is relative, but I did tell her how surprised I was yesterday when I could not remember the name of one of my friends' children (whom I have known all of her life) but could remember the name of my godmother's boss, whom I never met or even saw a picture of but remember his being talked about a few times...and remember, she died when I was 10!)

Her comment when I finished:  "Well, life goes on, I guess."  This is one of her go-to phrases when she hasn't followed or understood what you said, but thinks that a response from her is necessary.  It also effectively ends that discussion and usually precedes "I'm old, Bev."

She probably asked me 20 times what I was doing for the rest of the day (taking her to the hairdresser and when the hairdresser was finished, taking her back home again and then going to Sacramento to review My Fair Lady).  Each time I told her that she had a different response -- do I have to write a "report" about it?  How did I happen to get tickets for that show? Have I seen that show before?  Will I get paid to write about it?  Is Walt going with me?  Where will my review be printed? When I finish answering her questions she then says "so what are you doing for the rest of the afternoon?" and we start all over again.

A new wrinkle, though, is that she thinks never sees enough of me.  I haven't been there in a long time (2 days) and she misses me and when will I come back again (tomorrow).

About the 20th time she said "I'm old, Bev--do you think I'll live to hunnert?" I decided it was time to go.  I could either walk calmly out to the car, or stay behind and start screaming.  If I were her 24/7 caregiver, I would not have that luxury and that, I admit, makes me a tad guilty, but not really, because I know that she has the best possible arrangement right now and, whether she realizes it or not, I'm there almost all the time.

But maybe next time will be one of her better days, and I really enjoy them.  Wouldn't it be loverly...?

I've decided I really do not like her hairdresser at all.  She was fine up until she did my mother's hair last time, when she came out looking like she had stuck her finger in a light socket. I figured it was because she had been given a permanent. Fortunately it loosened up over the next few days, but the "look" was just horrible.  Today she was just having her hair cut, washed and set and it still looked like she stuck her finger in the light socket again.  We are scheduled to go to lunch with her friends on Monday and I'm hoping by then the tight curls will have relaxed and she will look more like her old self.

I was amused, however, to find out that there was a "Content Guide" printed for parents unsure about whether this is suitable for children to see.  It reads:  "With themes that include the importance of self-worth, the need to respect others and the value of education, it will likely appeal to a wide range of patrons, although younger children may not grasp some of the concepts or plot elements. It includes no violence or sexual situations. It does include references to excessive alcohol consumption and antiquated views on women’s rights and roles, and some of the plot elements focus on relationships."  I'm just kind of speechless that anyone would think such a content guide for such an old chestnut was even necessary.

But then we have become a country where your children can be taken away from you if you let them walk home alone from the playground 3 blocks away, something I did when I was in grammar school.  And Miss Hunnert walked 3 miles (I clocked it--it was 3 miles) to and from school from the time she was in kindergarten!  Today's children are going to grow up with no survival skills whatsoever.
Posted by Bev Sykes at 1:15 AM