I engaged in something that I rarely do yesterday.

It's something most people do every day.

Walt does a lot of it.

I did some housecleaning...and it about did me in.

See, we are having this little gathering here on Saturday.  Tomorrow Walt and I are celebrating our 50th wedding anniversary (where did the time go?) and the kids decided they wanted to have a party.
But where?  These days when we get together socially, it's at Atria because it's easier for my mother, but that wasn't going to work for this party.  But my mother doesn't do well in restaurants...well, she's OK, but she's uncomfortable...so they decided we would get together here and that Tom and Ned would cook dinner for us.

It's just a small group, just the family.  Walt and me; Ned and Marta; Tom, Laurel and the girls, my mother and Walt's brother and his wife.  Then Ned said he didn't believe in keeping secrets so he let us know that Jeri and Phil are going to fly out and be here too.  And because she's family as well, Charlotte is coming.

(This is a huge deal because Brianna and Lacie have never been inside this house and I'm having grandma performance anxiety.)

It's not that these people have never been inside my house and don't know that I am a terrible housekeeper, though since Walt has been doing so much housekeeping, he house is better than it has been in a long time.  Ned, bless him, said he would come over today and help clean up.  But I've always said I would have to clean for two days to get the house to a point where I could apologize for how messy it is.

A HUGE part of cleaning up is dusting the etageres.  These are two glass and brass shelving units that Gilbert bought shortly before he died.  I was so proud of those things and I felt so strongly that I wanted to take care of them for him after he died.  So they stand in the dining part of our living room and they hold all of the tsatskes that either we have collected on our travels or that people have given to us.  To dust it all takes 45-60 minutes, so it doesn't get done that often, but really needed it now.  When it's finished, the room doesn't look different at all, but I feel a tremendous sense of accomplishment to know that everything is dusted and on dusted glass shelves. 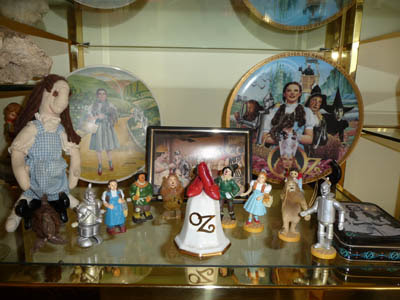 I set up a speaker so I could listen to my Amazon book and then I brought in my little desk fan because it was warm.  Even with that, I had sweat pouring off of me as I worked on the shelves.

I had to do things in small increments because my back starts to give out after awhile.  Even sitting in a chair as much as I could while I cleaned still ended up with my having to take a break every now and then.

As I cleaned I was thinking about having the girls here and what a temptation all these cute little things on these open shelves would be for them.  I have thought about this before.  How to "baby proof" the etageres so I wouldn't have to worry about them. 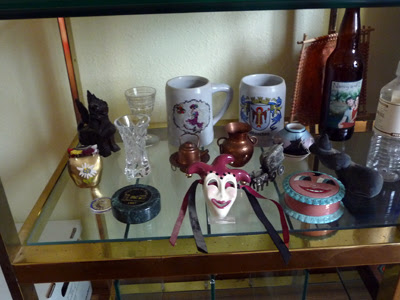 Then I thought back to my paternal grandmother and the times we spent at her house (very, very often).  She had a little shelf on which she kept a collection of miniature horses.  They weren't necessarily fancy or expensive...I seem to recall a couple of them were even made of plastic.  But they were very special to her (and it bothers me that when she finally moved out of her apartment they just disappeared...I never got the chance to ask for them).  But the rule was "look, but don't touch." 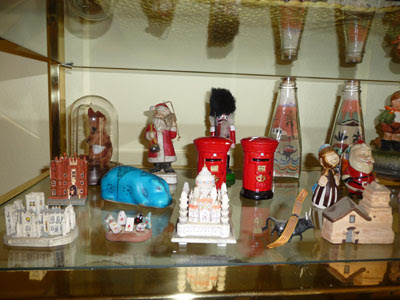 I was a horse crazed kid and I would spend a lot of time sitting on the floor looking at those horses and imagining playing with them, my grandmother yelling at me if I tried to touch them.  She was so afraid I'd break them.  To this day, I am sorry that I never had the chance to play with them.

And as I dusted all this stuff on the etagere I thought about the girls being drawn to it and wanting to investigate and realized that there is nothing on those shelves that is so special that I would be upset if it got broken, and what fun it would be to share those little animals and figures with them.  So I'm not worrying about it.  If they want to play with anything on those shelves, I will smile and be happy that they are getting to do what I always wanted to do and never could. 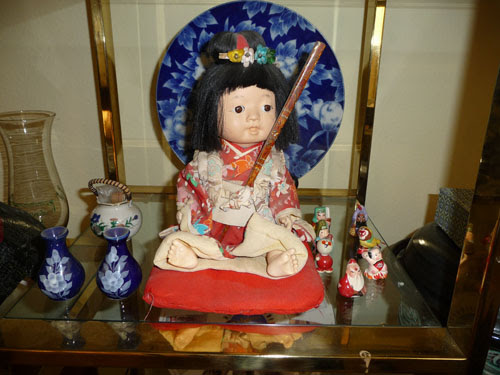 I didn't get a lot more done than just the etagere, but I did get that much done but it feels as if I cleaned house all day.  And I don't have to do it again for a long time....

Now I just have to worry about the dogs who use the house for their bathroom, and what to do about puddle pads, and whether or not our dogs will get along with the dog Tom and Laurel are bringing with them.
Posted by Bev Sykes at 6:22 AM

I learned from John's sister (you met them) and her grandchildren. She would sit with each one and let them handle the "things", then put them down, then go on to the next one. Once given the chance to handle and examine, the child pretty much lost interest. I wholeheartedly agree with "let them touch". It's the forbidden fruit that causes the problems.