Every year as the hype to the Tonys starts to build, I wonder why it is that I watch the show every year.  I haven't seen any of the nominated shows and am unlikely to until they start to tour, years from now. I don't know half (or more) of the big name Broadway stars.  So why do I watch, other than that it is usually the best/most professional of the award shows.  And I'm an award show junkie.

Usually, I am at least slightly familiar with the Big Shows thanks to Theater Talk, that wonderful weekly 30 minute show produced by Cluny-TV which our local PBS station used to run at midnight on Saturday or some ungodly hour like that (but which I dutifully recorded so Walt and I could watch it the next day, because he likes it too).  But it has disappeared from the programming schedule.

So since I'm missing Theater Talk I checked out their web site and found all the recent shows, many of which feature plays or musicals nominated for Tonys, so I watched a few of them.  My very favorite shows that Theater Talk does involves chit chatting with other critics.  This time it was Jesse Green of New York magazine, Michael Musto of “Musto! The Musical!” at Out.com, Patrick Pacheco of ArtInfo.com and Elisabeth Vincentelli of the New York Post chatting with hosts Michael Riedel of the New York Post and producer Susan Haskins.

Having now seen the Tonys, I think they were about 50% right on their predictions (just shows you what critics know!), but it's always fun to hear them dishing about the good and bad of each. 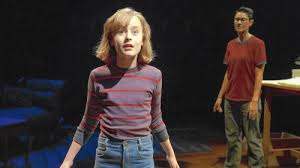 I also watched the interview with librettist/lyricist Lisa Kron and composer Jeanine Tesori, who wrote Fun Home, a musical I had never heard of.  Fascinating interview.  The show is a heart-breaking musical based on the memoir/graphic novel by Alison Bechdel about growing up in a troubled family and her relationship with her father prior to his suicide.  It ended up winning best musical.  (I was sorry, though that 11 year old Sydney Lucas, nominated for Best Featured Actress in a musical for the show did not win...she performed the featured song and was wonderful.) 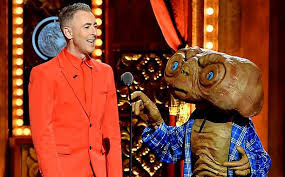 I have to admit, though, that her finest moment was one that I don't know if people noticed.  They were introducing Tommy Tune, who is about 8' tall to Chenoweth's 4'11".  She went to give him a big hug around his waist and then realized that she was actually hugging his genitals and repositioned herself quickly. 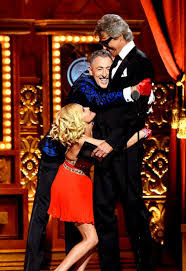 My own personal prediction for the show to sweep the Tonys wasn't even nominated.  It was the only one I'd seen and we had seen it in previews in Cambridge when we were visiting Jeri and Phil.  It's Finding Neverland, the musical version of the movie about the writing of "Peter Pan" and I absolutely loved it.  But the critics have not been kind and my cackle of critics (I don't know that the group name is for critics, but "cackle" seems fitting!) have always made fun of it. Again, what do critics know? But still, I was happy to see that they did a number from the show during the Tony broadcast anyway. 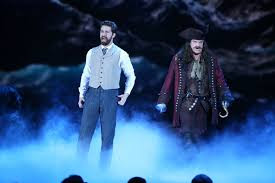 That's Glee's Matthew Morrison as J.M. Barrie and Kelsey Grammer as Captain Hook.  It doesn't show very well, but the projection of waves in the back was amazing.

Of course there was the usual Memorial section toward the end, paying tribute to those who have left us during the year.  Josh Groban sang "You'll Never Walk Alone" and I'm sure there were lots of tears in the audience, but I was giggling when midway through the song, a platform in back of the stage raised up from beneath the stage.  It held everyone in the show, all singing backup chorus for him.
But it reminded me of something Judy Garland says to James Mason in A Star Is Born when describing a particularly ornate dance number she has just filmed at the studio and that was the visual I had in my mind in this otherwise somber moment.

And now another Tony show is over and I can look forward to Outlander being snubbed by the Emmys (because I love it, so obviously it's not going to get any nominations), and the Oscars, which will be a rerun of the Tonys because I wont know anybody nominated and will have seen none of the nominated films. It was so much easier when I followed Hollywood and went to the movies regularly!
Posted by Bev Sykes at 1:48 AM

Email ThisBlogThis!Share to TwitterShare to FacebookShare to Pinterest
Labels: Tonys

My friend is in "Something Rotten" so I was glued to the Tonys!

That looked like such a fun show, from the number they did on the Tonys.