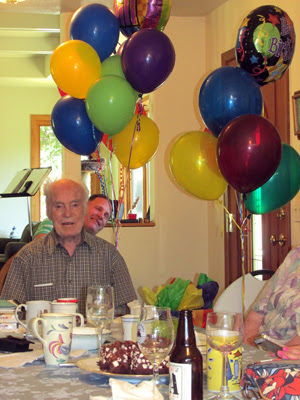 His birthday started in the hospital, where he was admitted on Thursday for an intestinal infection, and ended at a party for about 20 relatives and friends, some of whom had flown in from across the country.
When we left the party, it was still going strong, and Al was trying to sleep on the couch in the middle of it, his stamina finally having given up.

Al can sleep in the middle of a party, even a loud one, because he's totally deaf.  He went deaf in his youth, while working in the steamroom of a ship.  When Walt first met him, at his first job when he moved out to California after college graduation, he wore a hearing aid and it was possible, though not easy, to have a conversation with him, but over the years the hearing aids worked less and less and finally he gave up and stopped wearing them.  He can speak, but the older he gets the less clarity he has.

(Al was at our wedding, a high mass with a violin quartet and gorgeous music.  Al knew nothing about the Catholic church and couldn't hear the music and his comment to Walt after it was over was "it certainly was long!")

He continued to work with Walt until 1983, when he finally retired.  Shortly after that, his wife, who had suffered from something like chronic fatigue syndrome for many years, died, leaving Al alone in their house.

The house behind his was (and still is) owned by the guy who was his last boss (also now retired), and he and his wife, and another co-worker and her husband, have taken on the care of Al for many years now.  He recently moved into a retirement community similar to Atria.

This is a photo of the former co-workers. 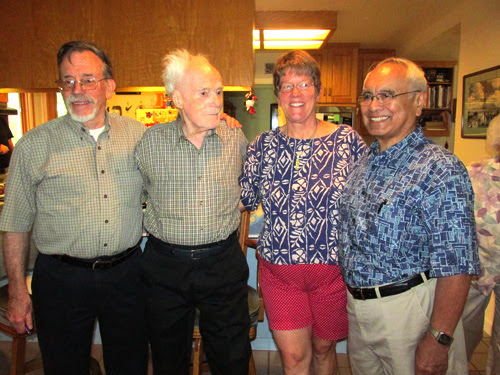 This is the kind of party that I usually hate.  I cringe when I know I'm going to a party where I will know almost no one, but this one was absolutely delightful.  Those people from the middle part of the country are so friendly and so gracious that it took no time at all before I felt like one of the group. (Now why can't I be that way when encountering people I don't know??)

There was a delicious barbeque dinner and the hostess had asked me to bring a fruit salad.  I went out to our little fruit stand, just a couple of miles outside of Davis, and bought a whole bunch of fresh fruits -- strawberries, watermelon, canteloupe, cherries -- and then added bananas, which we had here, and a can of pineapple.  Run of the mill salad, I thought, until those folks from North Dakota and Minnesota raved about it because they can't get the kind of fresh, flavorful fruit that we can here.  I remembered when I visited my friend Olivia in Idaho and she took me to the supermarket and scoffed at the pathetic choices for fruits there.  I guess I don't often appreciate what we have, literally in our own back yard!

Dessert was a quasi strawberry shortcake with just about a vat of fresh strawberries cut up, so full of flavor, a nice complement to my fruit salad!

But Al has now been feted in grand style and I was so pleased to have been there this afternoon. Truly!  (and I don't usually say that about parties) 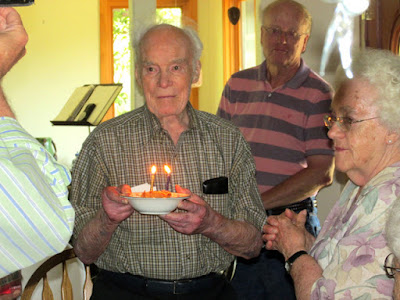 Email ThisBlogThis!Share to TwitterShare to FacebookShare to Pinterest
Labels: Al is 100